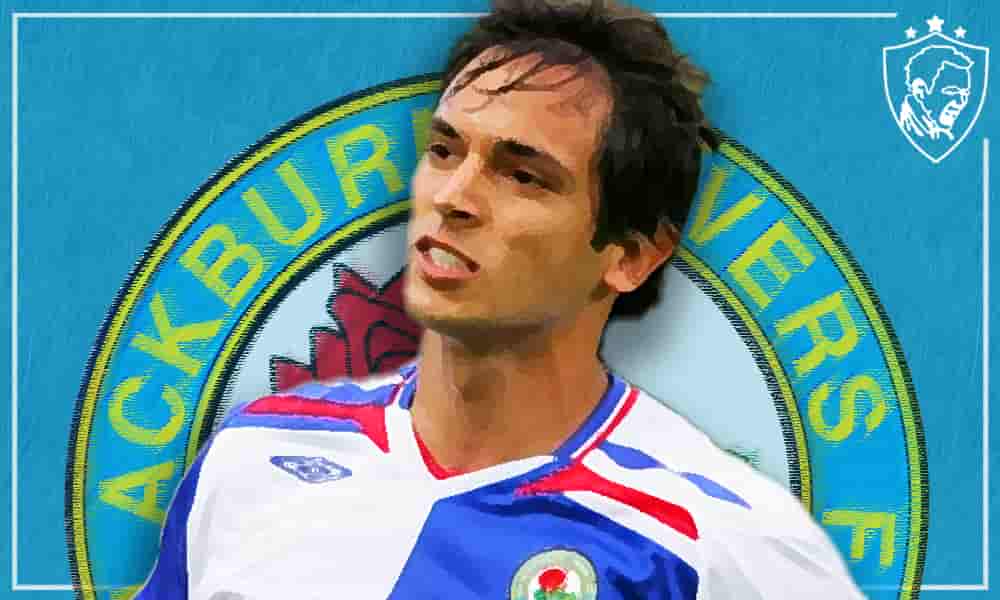 We can all enjoy a brief reminisce of a fabled one-season wonder, and it is due course that we look back on former Blackburn Rovers striker Roque Santa Cruz and his two-year spell at Ewood Park that transformed him into a Rovers idol.

Before Michu’s excellence at Swansea and Amir Zaki’s free scoring form at Wigan Athletic, there was Roque Santa Cruz in a Blackburn Rovers shirt. Perhaps the formers took some inspiration from the latter, who knows!

Whatever the semantics, what’s clear is that Roque presented an immediate danger for any opposing defender!

The Paraguayan began his career with Olimpia before heading to the Bundesliga to link up German giants Bayern Munich for an eight-year spell, though found it difficult to nail down a first-choice spot in Bavaria.

After racking up 31 goals in 155 appearances, primarily as a substitute, Santa Cruz headed to the Premier League to join Blackburn Rovers ahead of the 2007/08 season.

Rovers were far removed from their days of Yorke and Cole as their link-up strike partnership, and despite bolstering an impressive squad of Premier League cult heroes, including Morten Gamst Pederson, Chris Samba and the ever-dangerous Tugay, they were seen as being unlikely favourites to challenge for European football.

However, the moment Roque Santa Cruz strapped on that famous Umbro Rovers shirt of 2008, it became very apparent that the Lancashire giants had acquired a deadly sharpshooter in front of goal and an even bigger threat in the aerial department.

Santa Cruz became an instant favourite amongst the Ewood Park faithful and helped ignite Rovers towards a potential spot in the UEFA Cup (nowadays known as the Europa League), as the Paraguayan seemed to have filled any sort of burden left behind by both Cole and Yorke.

In just his first season, Santa Cruz netted 19 goals in just 37 games in the league from which he was touted as the fourth highest scorer in the Premiership that season, finishing behind some of the league’s most prestigious names.

A return even his biggest fan would doubt that he’d achieve in the tough weather in the North of England!

Only Cristiano Ronaldo, Fernando Torres (not the Chelsea Torres, we mean the unstoppable force that Liverpool fans were treated to) and Emmanuel Adebayor outscored Santa Cruz that season in the league which is some great company to be a part of.

For his efforts, Santa Cruz was unsurprisingly named as the club’s Player of the Season as Rovers finished seventh in the league, which ultimately would be just shy of a place in Europe due to Portsmouth winning the FA Cup under Harry Redknapp only days after the season had ended.

Despite such an amazing introduction to the Premier League, Santa Cruz’s form would soon hit a snag throughout his secondary campaign as he finished the 2008/09 season with only four goals in 20 games as Rovers endured a difficult season after Mark Hughes’ departed in the summer with Paul Ince being named as his replacement.

Ince would soon be sacked in the earlier stages of the season with safeguard Sam Allardyce being given the job. Amidst all the chaos in the managerial department, Santa Cruz would later leave the side in the summer in a now infamous transfer to Manchester City to link up with Hughes once again.

Since that transfer, it seems that both Rovers and Santa Cruz’s career have taken major steps backwards as the Venky’s eventual takeover plummeted the former Premier League champions into relegation just two years later.

Where the side is still competing to this day after numerous underwhelming seasons and even a second relegation in 2017 to League One.

Imagine if that Icelandic volcanic eruption had not have left the team scrapping the bottom of the barrel for a replacement for Santa Cruz.

As for Santa Cruz, he famously flopping in Manchester and soon jetted out to spells in Spain with Malaga and Cruz Azul in Mexico before heading back to his boyhood club Olimpia in the Paraguayan national league where he is still playing to this day, at the youthful age of 40.

Santa Cruz is a perfect example of a player who fits the criteria of ‘the streets will never forget’ as during his short spell at Ewood Park, he was a dazzling striker and as such remains a popular figure amongst fans of Rovers during their final few years before the inevitable Venky’s collapse.

But that’s a whole different story for an entirely different day.

What is your favourite recollection of seeing Roque Santa Cruz in a Blackburn Rovers shirt? Let us know by tweeting us using the button below and be sure to follow our Twitter account for more!