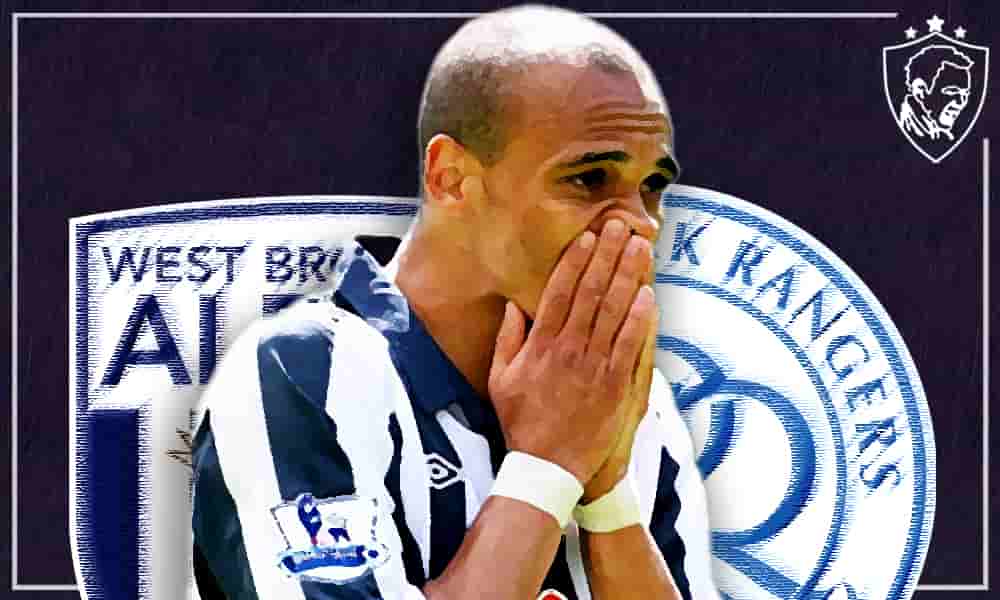 Despite ending his career at West Bromwich Albion on a sour note, Peter Odemwingie’s D-Day disaster was a small crack in an otherwise incredible run for the Baggies.

For those unfamiliar with the story, let me break it down for you. It was all the way back in the bleak mid-winter of 2013. Peter Odemwingie was set to make the move from West Brom to Harry Redknapp’s Queen’s Park Rangers, after having declared (very publicly) to his teammates that he never wanted to play for his current employers ever again.

So, on the final day of the January Transfer Window, Odemwingie took it upon himself to drive the 120-mile journey from Birmingham to London; in an attempt to speed up his last-minute move to the London side.

But all did not quite go according to plan.

Everyone from fellow teammates to Odemwingie himself thought the deal was done, but it wasn’t until he arrived at Loftus Road that everything started to go a bit pear-shaped!

Laughably, despite saying his goodbyes to the Albion roster, making the trip to London, signing autographs outside the stadium and even telling the Sky News Reporters that had gathered that he was ready for ‘a new chapter’, the deal ultimately fell through.

Little did the Nigeria international know, but the move rested on QPR’s Junior Hoilett moving in the opposite direction to facilitate the transfer, and so Peter remained stuck in his car outside Loftus Road after being refused entry to the stadium on the grounds that a move for the Canadian never materialised.

Embarrassingly, the transfer deadline passed and Peter Odemwingie had to make the trip back to West Brom; thus rejoining the squad that he was so eager to get away from. Upon his return, the striker was told to stay away from training for a few days and was then fined after an internal disciplinary hearing.

He didn’t start another game for West Brom for the rest of his time there, making only seven substitute appearances before being sold to Cardiff City in September.

However, despite all the drama that accompanied Peter Odemwingie’s exit, in his time at the club, he cemented himself as one of the side’s best players. His initial move to West Brom in 2010 took the Premier League by surprise, coming from Lokomotiv Moscow where he’d netted 23 goals in 80 appearances.

Internationally, for Nigeria, he’d racked up nine goals in 47 games and before his move to Lokomotiv, his spell at Lille earned him 26 goal in 100 games.

Those are some pretty decent stats for a wide forward!

Upon joining West Brom, he instantly made an impact. Starting his first game for the club against Sunderland where he scored 81 minutes into his debut. In the games that followed that season Odemwingie racked up a total of 15 goals in his first Premier League season.

Although his second-year performance wasn’t quite as impressive as the first, he still managed to bag 10 goals; raising the quality of the squad in the process!

After a less than impressive stint following his £2.25million move to Cardiff City, Odemwingie quickly fell out of favour at the Welsh side. Soon enough he headed to Stoke in a rare player-exchange with Kenwyne Jones going in the opposite direction.

He returned to glory at Stoke, scoring five goals in 15 appearances, earning himself a recall to Nigeria’s world cup squad for the 2014 instalment of the competition.

And yet, despite transforming two of the Premier League’s struggling sides and his overall talent, Odemwingie is remembered by most for his less-than exemplary behaviour during that fateful transfer window of 2013.

Clearly, the lesson to be learned here is to wait until the deal is actually done before travelling across the country and talking to reporters.

Can’t say it wasn’t entertaining for the neutral, though!

If you’re a Baggies fan, let us know your honest opinion of Peter Odemwingie by Tweeting us below!