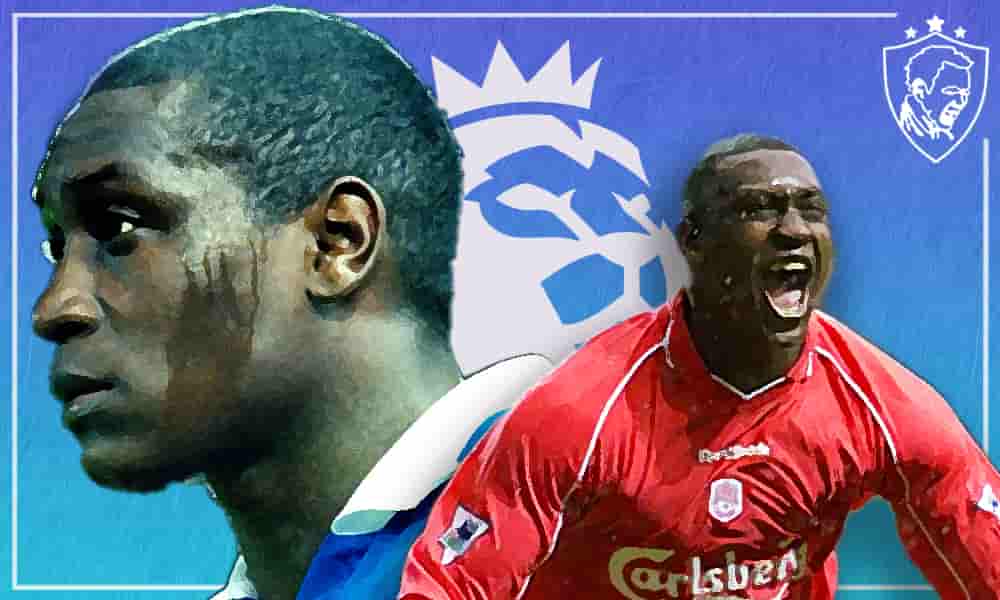 Here we have one of three players with a last name beginning with ‘H’ to score 100+ goals in the Premier League … so yeah!

Be honest with yourself, did you know that this stat about Emile Heskey in the Premier League was true? Well, neither did I until a couple of months ago after watching some ‘A Question of Sport’ archive footage on YouTube.

But in case you wanted to know, the other ‘H’s were Jimmy-Floyd Hasselbaink and Thierry Henry. So, suffice to say that Emile is among some illustrious company here. And the thing his … he deserves to be!

Now, don’t twist my words here, I’m not trying to say that he was as well-round or as competent a finisher as a Hasselbaink or Henry – especially so given that these guys didn’t spend as much time in the English topflight as Heskey did, but that’s not to say that Emile wasn’t talented in his own right.

In fact, to say that he wasn’t talented is a gross mis-statement regarding Emile Heskey’s ability in the Premier League era, and it’s more so a question of contrasting his later years with his former than anything else.

In recent years, Emile Heskey has fallen foul to a fate that befalls other footballers who peak a little bit sooner than others – be that physically, mentally or otherwise. Especially in today’s harsh, though inventive ‘meme culture‘.

And with Heskey, his physical form deteriorated as the years progressed, and social media influencers like KSI have been quick to jump on the Englishman’s back for want or proliferating their own status.

In his defence, I don’t even think KSI was around at the time when Heskey was a baller in the league, I mean, neither was I, but at least I looked into it – and it’s something which will prove to be a regular feature on the Ultra United (‘Ultra UTD’) Cult Heroes page.

When doing this, I realised that Emile Heskey was a complete colossus in his earlier years on the domestic stage – a part of his career which brought him national attention as a teenager with Leicester City, before earning a much-deserved move up the table to Gerard Houllier’s Liverpool in 2000.

Where he’d become the type of forwards that fans couldn’t help but respect or love.

While at Leicester, it was almost as if the young lad had the entirety of the city resting on his stocky shoulders, and the sheer simplicity of his game allowed him to pay them back with ruthless force. With the ball at his feet, Emile Heskey was a very single-minded forward – perhaps not the most technically gifted at carving out opportunities and slotting them away, but more so a powerhouse who would drive at defenders and force them to retreat in order to provide him with the space that he needed.

Then, when he moved to Liverpool, we saw a different side to his game.

Upon joining for £11 million (then a record-breaking transfer for the Scousers), his all-round game improved for the better; partly due to the attributes of the players around him. When compared to the likes of Michael Owen and Robbie Fowler, they were about as different as they look! And it was up to Emile Heskey to provide some ulterior weapons in the arsenal of the club’s formidable attack.

No matter how hard he tried, he was never going to match Michael Owen for pace, nor Robbie Fowler for accuracy, but equally, they couldn’t shine Emile Heskey’s boots when it came to jostling for position in the air, and knocking the ball over the last line to set them free. Like a Berbatov to their Robbie Keane – more on that here, btw.

Together, it was poetry in motion. In arguably his most prolific season in the topflight, the trio contributed to 38 league goals in one of Liverpool’s better seasons from around this time. And I’m going to stick my neck out and say that this couldn’t have happened without Emile Heskey. He worked hard, was very consistent, enormously powerful and very intelligent in his movement.

So, let’s just give him a bit more respect, ey?

Share this post and tag us in your honest review of Emile Heskey throughout the Premier League era. Along with one of your favourite moments of his for any of his employers