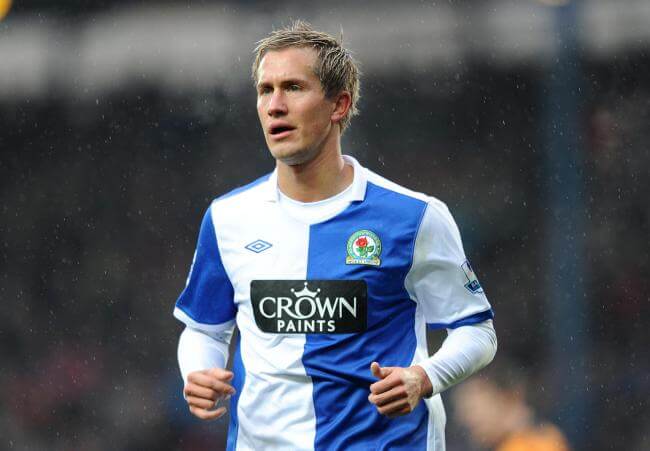 Before we get into the rest of these words, can we just take a moment to appreciate the title of the article. I used the term ‘MVP’ – the abbreviation for ‘Most Valuable Person’, and altered it to fit the purpose of describing Morten Gamst Pedersen’s influence at Blackburn Rovers Football Club during his time there (2004-2013), now you can’t say that this isn’t writing at its finest. In fact, you’re welcome!

Anyway, we’re here to talk about a footballer aren’t we? And what a joyous player to talk about! As mentioned previously on an article we’ve published recently about Newcastle United ‘cult hero’ Jonas Gutierrez, I find that there’s something innately satisfying about a good transfer deal. One in where the fee required to register another team’s player is a very fair one and, perhaps in hindsight, looks like a steal in comparison with what their later notoriety might command. It’s a case in point with Morten Gamst Pedersen at Blackburn when Graeme Souness signed him in 2004.

You know, we ought to give Graeme Souness come more credit for his credentials as a manager. Not only has he managed in the Premier League as well as abroad, but he has been more daring than the average manager when it comes to taking risks in the transfer market, but his are more calculated than most – particularly in his recruitment strategy and budgetary restrictions. So, when Damien Duff left Blackburn in 2003, his scouting and agent directory was ridden into submission before he happened upon his eventual choice.

£1.5 million is all it took to transfer Morten Gamst Pedersen from his home with Norwegian side Tromso deeming it a fair amount for which to secure his services to a Premier League club. The fact that his jet blonde hair, raw acceleration and crossing ability merely resembled Damien Duff (who was leaving for a nouveau-riche Chelsea, then-managed by future Premier League title winner, Claudio Ranieri) was a bonus for the fans, I suppose.

But more than that, I believe that Pedersen trounced the Irishman in a number of key areas, and meshed in a bit better with the incumbent Rovers midfield than Duff could. Duff was predominantly pace-based and got to the by-line more than he did carve out an opportunity in midfield, but when you have the technical qualities of Tugay and co. in the centre, then you needed somebody more cultured and thoughtful to forge new ways in which to create chances in affect the game.

On top of this, the set-piece ability of Morten Gamst Pedersen has since been resigned to Blackburn Rovers folklore – not just because of the steep decline that has befallen the club since his time there, but because he became one of the best in the league at doing it. He soon became the star man for the team’s free-kicks and corner strategies, and even from open play, the control with which he commanded the ball was phenomenal at Premier League level. Match that with his unerring levels of consistency and dedication to the club, and it’s no wonder that he’s regarded so highly over there around Ewood Park – especially since leaving.

Though I suppose that batting away the wandering eye lids of the league’s bigger clubs (e.g. Manchester United and Tottenham Hotspur) and even from further afield in A.C. Milan, will attribute to that positive rendition. But if anything, I think it adds to his overall status as a player – not just for the club he stayed with. It shows that football was more than chasing a pay-day and earning global recognition. Sometimes it’s better to stay where you’re loved and return their gratitude. And this is why, even though I would’ve loved to see Morten Gamst Pedersen for my own club, I will always admire and respect is decision to stay loyal.

Any Blackburn fans out there? If so, share this and tag us in your favourite memory of Morten Gamst Pedersen!

1 thought on “Morten Gamst Pedersen: The ‘MGP’ of Blackburn Rovers”