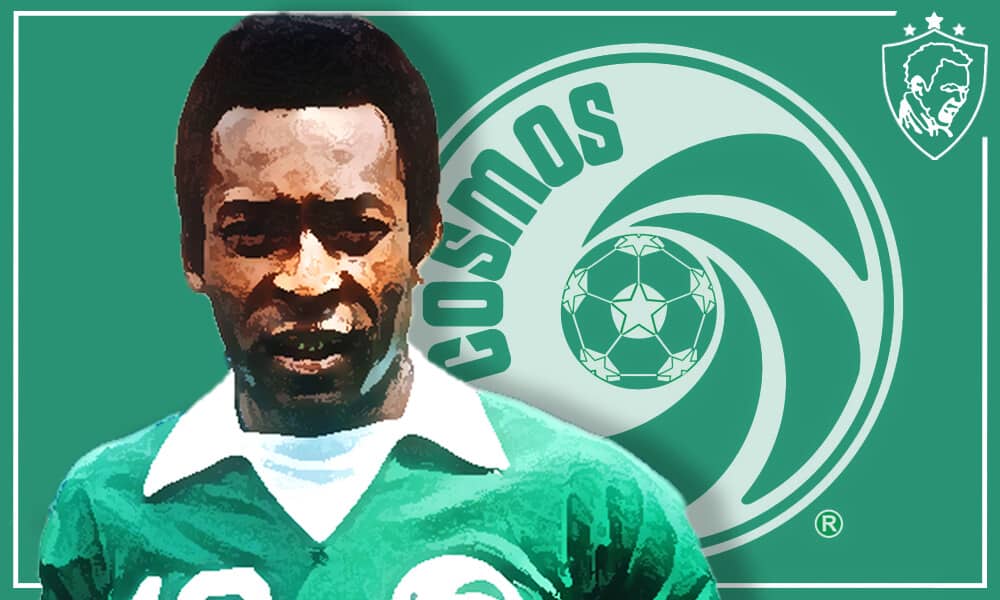 You get stories where a single transfer of one player from one team to another can have some truly cataclysmic effects. Then you have the case of Pele and the New York Cosmos.

If you’ve never heard of Pelé before then just think of him as an almightily good football player. And when you navigate away from those persistent comparisons with some Argentinian guy in the generation after him, you begin to realise just how good he was. In essence, he’s the guy in Brazilian football. An icon like no other.

A nation which has since bred the lights of twinkle-toes Ronaldinho, and the incredible Ronaldo, Pelé’s super-stardom propelled him to some dizzying heights during his playing career. He’s won World Cups with Brazil and scored oodles of goals with Santos, and was widely considered to be the best striker of his generation. So, how on Earth did we get to a point where ‘Pele and the New York Cosmos’ was even a consideration? Hehe … rhymed.

Well, in actual fact, it was something which even Pelé himself couldn’t have seen coming, given his premature decision to retire from professional football as a one-club man with Santos in 1974. After all, the man had just finished his nineteenth season in that bright white outfit, and scored millions upon billions of goals in the process, so it seemed like a fair decision considering his then-global status as perhaps the game’s best ever player.

However, little did he know, that some big-wigs just north of his beloved Brazilian territory were cooking up quite a novel little idea in the United States. Many top executives in America, most of whom held major ties in other sporting franchises in the country, were beginning to wise up to the global appeal that football held over people at the time.

Seeking to take a slice out of that pie, a number of institutions were thrown together with the aim of starting of football / ‘soccer’ league capable of being produced and presented like the best competitions in the world. After christening their baby, the ‘North American Soccer League’, a crippling thought soon dawned upon them.

Central Europe had, quite rightly, ruled the roost of this particular game for the best part of a century, and it wasn’t as if the ‘NASL’ was going to instantly claim their attention. If anything, the purists might see this as nothing but a corporate stunt to steal some attention away from their own beloved football clubs. To combat this, the American execs decided they needed a public figure to simultaneously kick off their latest endeavour, while proving to the doubters that they were serious about this whole football thing. And ‘figures’ don’t come much bigger than Pelé.

Even at the age of 35, Pelé was more than capable of keeping up with the Joneses on this occasion. Particularly when you consider that the play-off format of the NASL wasn’t alien from what he understood from his time in the Primera Division, and the fact that the players around him weren’t anywhere near his level of capability.

In what would turn out to be an embryonic format of a footballing twilight ‘holiday’ period, Pelé officially ended his professional career as a New York Cosmos player. Where he scored 37 goals in all competitions in roughly double the amount of appearances; winning the NASL ‘Soccer Bowl’ (great name, that (!)) and Atlantic Conference Championship in his second and final season with the club in 1977.

After only two years in the States, Pelé’s influence hadn’t gone unnoticed; prompting other institutions to sprout from the ground in their yearn to soak up the Cosmos’ status, and who did well enough to entice the likes of Franz Beckenbauer, George Best, Eusébio and Johan Cruyff during various separate tenures in American soccer.

And although things might not have gone the way it could / should have for these American franchises, Pelé’s move to the New York Cosmos will live long in the memory as perhaps the most audacious, exciting and inspiring transfers to have put on the football stage. Just imagine the scenes!

In your opinion, what would today’s equivalent be of Pele moving to the New York Cosmos? Let us know in the comments below and share this article if you liked it!