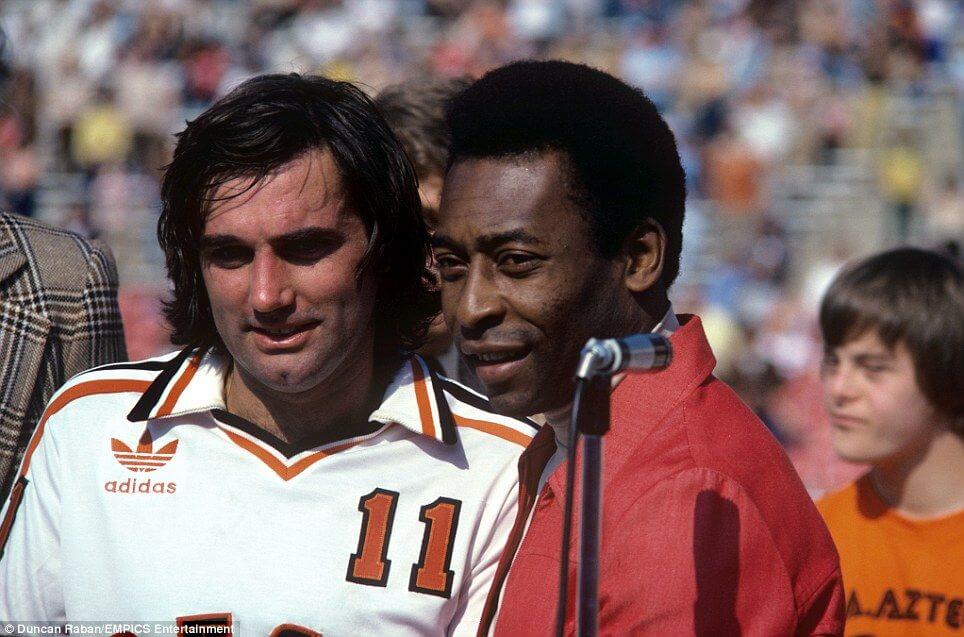 The history of American soccer is one that we will go into in a lot more detail soon, as this story dovetails nicely into its introduction in the ’70s.

As his name would suggest to the untrained eye, George Best was easily one of the greatest players to ever sprout from his generation. Considering this was a time where the likes of Eusebio, Beckenbauer and Pelé were dollying about in the football scene, that is no small praise whatsoever.

Generally described as a ‘fallen hero’ who ‘should have achieved more’ (*sigh*), it’s increasingly unfortunate that George Best’s personal life may have some a long way to overshadowing some of his moments on the football pitch. Because before he eventually did move over to the United States, the man was a phenomenon.

Coming through the ranks of the famous Manchester United post-Munich academy, George Best eventually became a part of the Red Devils’ most successful era up until that point. One which crowned him a European Champion in 1968 and claiming the coveted Ballon D’Or award by the end of that campaign.

Throughout which, his many dribbles, jaw-dropping finishes and awe-inspiring skill was something which proved alien to the world of English football at the time. And once his talents were dovetailed with that of colleagues, Sir Bobby Charlton and Sir Denis Law, there wasn’t a dry eye in the house when the ‘Holy Trinity’ were in the groove.

As mentioned briefly earlier, personal anguish and lifestyle troubles led George Best down a path of alcoholism (among other things) from which his bright star would never quite re-emerge. The glory with which he stole the show in 1968 [retrospectively] reeks of the story of a man who didn’t have anything left to achieve.

Six years after this, though there were signs of his qualities in the early ’70s for United, Best would set sail on the beginnings of a ‘journeyman’ career. Where he wouldn’t settle for any more than a single season (if that) before his chronically itchy feet took him elsewhere. Though his most prolific post-Old Trafford stint would come with the Los Angeles Aztecs in ’76 – in the newly-formed North American Soccer League.

A precursor to what we now know as ‘Major League Soccer’ in the States, the ‘NASL‘ stands as one of the most infamous and interesting sporting decisions ever taken by the Red, White ‘n’ Blue. Presuming that they could use their general capitalistic approach to capture the attention of ‘soccer’ fans around the world, their approach alienated the idiosyncratic qualities of football supporters, and led to a poor product as a result.

But this is only something we see in retrospect of their narrow-minded philosophy to how the game should be presented, and the enormous amounts of money they put into this activity. A lot of which was spent independently by various institutions looking to take a bit out of the commercial opportunities football offered.

The aforementioned Pelé and Beckenbauer joined their initiative, as did the wonderfully enigmatic Johan Cruyff. And, poised to spend a womanising and gullet-developing life after his greater in-game achievements, George Best joined their list of gone-by talents. However, 15 goals in just under 30 appearances suggested that this meant a lot more to him. And indeed, it did.

Away from the wandering eyes of people looking to scrape at his back or claw at his fame, Best (however briefly) was able to escape the mainstream criticism and into a world of people who loved him for his footballing ability. Although it was only for a single year, it remains a blissful campaign for the Northern Irishman, and something which stands as a welcome garnish in the entree that is George Best’s awesome, natural footballing ability.

Do you remember much of George Best’s time in the North American Soccer League? If so, let us know in the comments below and share this on social media if you liked it!