Ronaldinho: The Greatest Back-Up Ever?! 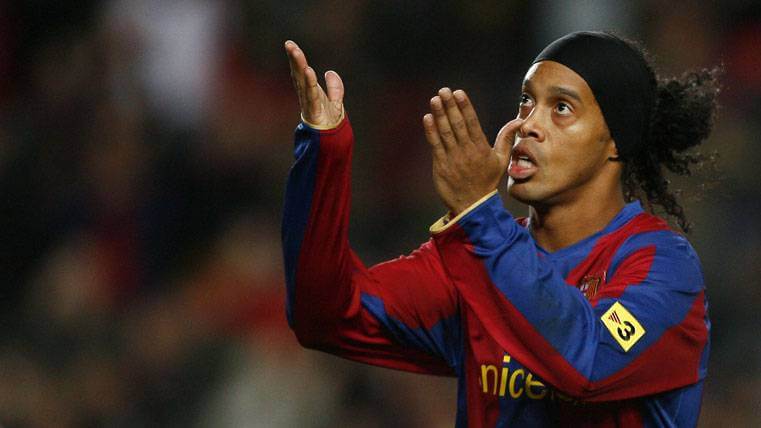 Imagine that – Ronaldinho wasn’t even FC Barcelona’s first-choice signing when he moved there in 2003. Liberty!

Since I was a kid, I have been absolutely enamoured by the playing style of Ronaldinho, namely because he played as freely and majestically as can only be described as perfect for any kid to see. He always had a smile on his face, knew exactly how to get the ball to do whatever he’d wanted it to do, and he even had time to entertain us with the odd flick and trick whenever he got bored of doing that mundane ‘pass and score’ nonsense.

And the greatest part of his career came in the famous blue and red of FC Barcelona, where he spent a half-decade in Catalonia laying siege to all that lay before him as the club geared up for its most illustrious time on the pitch to date surely after his impact was felt. A stint which came after a luxurious €30 million transfer was sealed for Ronaldinho to move from his previous home at Paris Saint-Germain and into the Nou Camp. But like a lot of things that we’ve come to discuss here at Ultra United (‘Ultra UTD’), things aren’t always as clear-cut as they seem.

On the face of it all, it seemed as though the acquisition of Ronaldinho was a very simple ‘means to an end prophecy’. At the time, Real Madrid were looking to establish one of their most ‘in-your-face’ policies to date, which began with the startling acquisition of FC Barcelona’s own Luis Figo in 2000. So, it looked as though years of playing in their media shadow had encouraged Barca to do the same – with Ronaldinho standing out as the commercial talent they required to soak up that limelight.

“Ronaldinho was responsible for the change in Barça. It was a bad time and the change that came about with his arrival was amazing.”

However, when it came to being in the limelight, they actually wanted somebody else to do it – somebody who had been tearing their own league apart for the best part of a decade, and seemed to be having troubles in their own paradise which would allow Barca to slip through the net undetected to woo them into Spain. A man by the name of Manchester United’s own set-piece specialist (and part-time Spice Girl enthusiast, David bloody Beckham!). ‘But wait, didn’t David Beckham end up moving to Real Madrid?’ I hear you ask. Why yes. Yes, he did!

You see, the Galactico project wasn’t going as projected at the Santiago Bernabeu, and the club’s analysts had determined that a lack of set-piece specialism was costing them greatly. So, they’d singled out Beckham at the eleventh hour from when Barca had lodged their own interest in him, and then (buoyed by the prospect of losing out to a rival) Real Madrid wilfully outbid Barca to win David Beckham’s signature – leaving the Blaugrana board searching for a back-up option which could match Beckham as closely as possible in terms of his on-pitch skill and commercial viability. And this is where Ronaldinho comes in!

As a playing specimen, there are very few which could match the unexpectedness and sheer audacity of a prime-time Ronaldinho. He was quick, very skilful and ever-determined to ensure that Barcelona would reach the dizzying heights of European football that he was tasked with helping them earn. And when his abilities matched up with the playmaking efforts of Deco and the relentless scoring ability of Samuel Eto’o (ironically picked up at the expense of Real Madrid, as we’ve mentioned here), there was no stopping them.

And as the fates of irony weaved its cruel web, it came to be that two players whom Real Madrid missed out on would ultimately allow their arch nemeses to rise above them in the Spanish ranks for the time that they were there. Then, when you come to think that either of these men were afterthoughts of their original policy, well, it just beggars belief! Just to add another twist to the tale, there was also talk that Ronaldinho was the subject of a big-money move to Manchester United – who needed a replacement for the departing David Beckham! But more on that later …

Before I forget, if you enjoy this type of football analysis, then maybe this might interest you. I’ve been working on my debut book ‘The Football Spider Web’ over the course of the year and I’m pleased to say that it’s now available to purchase HERE via Amazon Prime. It’s a novel which journeys through the past 50 years of football history whilst linking up the important stuff to form a single, simple narrative to describe the game’s development from the beginning of the timeline to now. So, please do check it out if you have the time and let me know what you think!

Don’t forget to share this post below and let us know your thoughts on the Ronaldinho afterthought deal!

1 thought on “Ronaldinho: The Greatest Back-Up Ever?!”