United headed into the 2009/2010 season once again as reigning champions of the Premier League and despite bolstering a squad filled to the brim with stupendous talent, their opening game of the season would end in a shocking defeat at the hands of the new boys Burnley.

After a near 35-year absence, the Robbie Blake and the rest of the Clarets made a return to the English topflight after seeing off Sheffield United in the 2008/09 Championship Play-Off final at Wembley.

While there certainly was an abundance of hype surrounding the Lancashire sides arrival to the Premier League, they were already touted as being early relegation favourites and as a likely candidate to be rooted to the foot of the table for a large part of the season.

To make matters worse, they really could not have been handed a more challenging opening day fixture.

In front of an always raucous Turf Moor, Burnley would begin their returning Premier League season against the immovable defending champions, Manchester United, who of course were a regular topic amongst football fans following Cristiano Ronaldo’s world record transfer to Real Madrid that summer.

Even with Ronaldo out the team, Burnley would enter this game as the heavy underdogs with many expecting the Clarets to be given a hard dose of life in the topflight by Sir Alex Ferguson’s legendary dynasty team.

Oh, how wrong they were!!

With over 20,000 dedicated fans cramped into the rustic ground, Burnley would shock United and produce a result that would send shockwaves around the league with forward Robbie Blake cementing his name in Burnley history.

Blake was a striker who made a name for himself in the lower tiers of English football but would later struggle to become a breakthrough talent in the Premier League at Bradford City back in 1999 through to 2001.

After a loan spell with Nottingham Forest, Robbie Blake would move to Burnley and would later return to the Premier League with Birmingham City in 2004 and soon headed to Elland Road to join Leeds United before returning back to Burnley in 2007.

Just couldn’t stay away, now could he!

He most notably scored a brace against Tottenham Hotspur in the 2009 League Cup semi-final which almost saw Burnley setup another encounter with Sir Alex and Manchester United before Spurs scored two late goals to advance to their second consecutive league cup final.

Robbie Blake would start the game against United in Burnley’s inaugural fixture, and it would not take him long to establish himself as a major threat to both the United backline and even his own teams’!

With just shy of twenty minutes of first half football being played, Steven Jordan whipped in a deep cross to the back post with United legend Patrice Evra challenging Martin Patterson at the back stick.

Evra managed to get a knock on the ball to send it to the edge of the box which was then latched onto and stuck home brilliantly by a pouncing Blake who fired the ball sweetly on the volley into the bulging net of Ben Foster, whose Go-Pro would surely have made for great viewing that day!

Blake would soon transpire from hero-to-zero when he conceded a penalty at the other end only a few minutes later.

Danish keeper Brian Jensen would bail the striker out of any further repercussions with a diving save from the spot to deny United fan favourite Michael Carrick just before the half-time whistle, with Burnley seeing off the defending champions in the second 45 to earn their first topflight win in 33 years.

The Clarets would also shock Everton in their very next home match with another remarkable 1-0 victory over David Moyes’ established side, becoming the first ever newly promoted side to win their opening two home games in the Premier League.

Things would ultimately fall apart at Turf Moor with the controversial departure of Owen Coyle as manager in January, who made the infamous decision to take charge at Northwest rivals Bolton Wanderers, despite Burnley sitting ahead of the Whites in the league table at the time.

Brian Laws was named as caretaker boss but would be unable to turn around the fortunes at Turf Moor with the Clarets heading straight back to the Championship, finishing 18th and five points from safety.

Despite such a short stint in their initial topflight season, Burnley have found tremendous stability and tenacity under Sean Dyche in recent seasons, that has even seen the lonely Lancashire side play out a season in the Europa League after a 51 year absence (all be it just the qualifiers).

While Burnley have continued to carve out a number of impressive feats in recent years, at this point they were mainly known as a scrappy underdog who were infamously quoted in the Inbetweeners movie from Will McKenzie’s holiday travels.

Yet here they were back in the Premier League and knocking the most dominant force in English football off their pedestal in a fabulous fashion that has since become a prelude to the future success that was soon to commence.

Do you remember where you were when Robbie Blake scored for Burnley against the mighty Manchester United in the Premier League in 2009? If so, let us know where by Tweeting us using the button below! 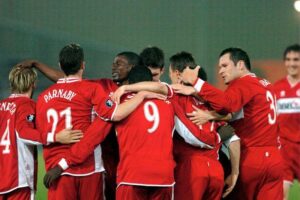 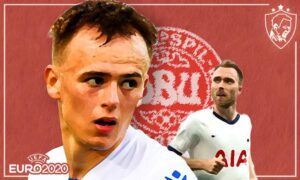 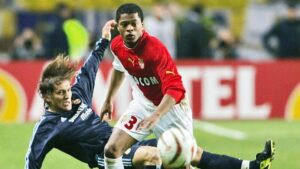 The Deschamps Decision that Transformed Patrice Evra in ’02

Sometimes, it can be something as simple as a positional alteration which can catapult one’s career from a prospect to an eventual stalwart. In case 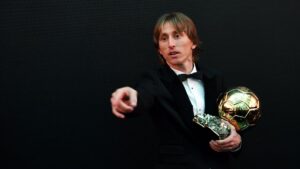 If you ever need some reason to generally reject some of the garbage the wider media throws at you, then this is for you. Over 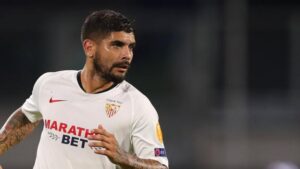 Ever Banega: A Mini Maestro Many Loved to Hate!

Despite the odd scandal, a broken leg and no shortage of bust-ups, Ever Banega endeared himself to millions worldwide. Personally, and as a lifelong Preston

Now, I’m all for someone just taking opportunities when they come, especially when any financial gain involved doesn’t directly negatively impact other people. But this