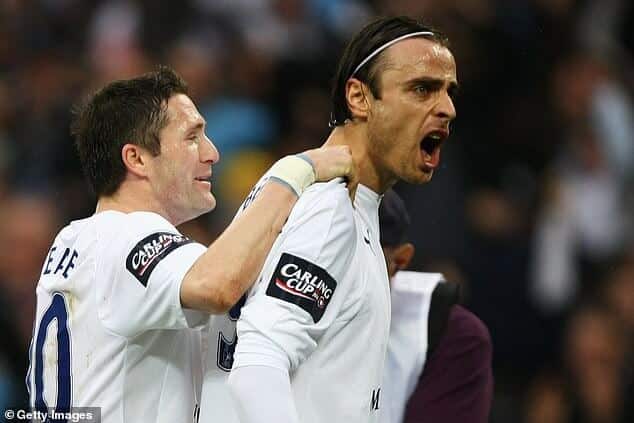 In any strikers’ pairing, this entire concept of ‘balance’ is one which is pivotal to strike, and these two epitomise it by getting it absolutely spot on.

If you know me even a little bit, then you’ll know that I’m a big fan of Dimitar Berbatov. His finesse, hold-up play, improvisation on the ball was just … mwah! In fact, I did write a little somethin’-somethin’ on the big Bulgarian when he eventually moved to my beloved Manchester United … but for that to happen, he had to prove himself.

Don’t get me wrong, Berbatov was clearly a talented man before winding up on the fabled shores of the Premier League. Roughly 70 goals in over 150 appearances for Bayer Leverkusen in the Bundesliga was certainly nothing to be sniffed at, and we all got to see his varied ability close-up in England for just over £10million.

At Bayer, Berba arguably had to do a little more ‘outside of his comfort zone’ in order to fulfil his role as their ‘main man’. But coming in to Spurs, a side stacked in midfield with the likes of Luka Modrić and a younger Tom Huddlestone, it was clear that their passing and technical qualities would complement his preferred game.

Described by eventual teammate Gary Nevile as a ‘weird striker’ for ‘not wanting to score’, Dimitar Berbatov found his feet at Tottenham by not coming in with the intention of stealing the limelight from their front line. Which, I imagine was music to Robbie Keane‘s ears when he appeared at the Spurs training ground.

An explosive striker in his heyday, Robbie Keane’s pace and impact dovetailed beautifully with the delicacy and precision with which Dimitar Berbatov conducted his business. So much so, that Berba would often be deployed a good 10-15 years deeper to the Irishman to make the most of his technical qualities near the midfield.

That way, Dimitar Berbatov was able to find himself some space, swivel on a sixpence and watch a marauding Robbie Keane forge forward in his favourite direction towards the opposition goal. Now, either this could make a run which Berbatov could find and lead to a goal … or simple stretch the back line and make opportunities elsewhere.

Either way, the two of them were nothing short of deadly during their three-years-or-so in Spurs white. And the fact that both Berbatov AND Keane had been earned a joint Player of the Month Award by the Premier League boffins in April 2007 (something which has not since been repeated), illustrates their inseparability.

What’s your favourite Dimitar Berbatov and Robbie Keane moment? Get it down below!

previousThe Strange Loan That Made Antonio Valencia’s Career in 2006
nextMorgan & Huth: The Forgotten Duo of the Foxes Fairytale Season