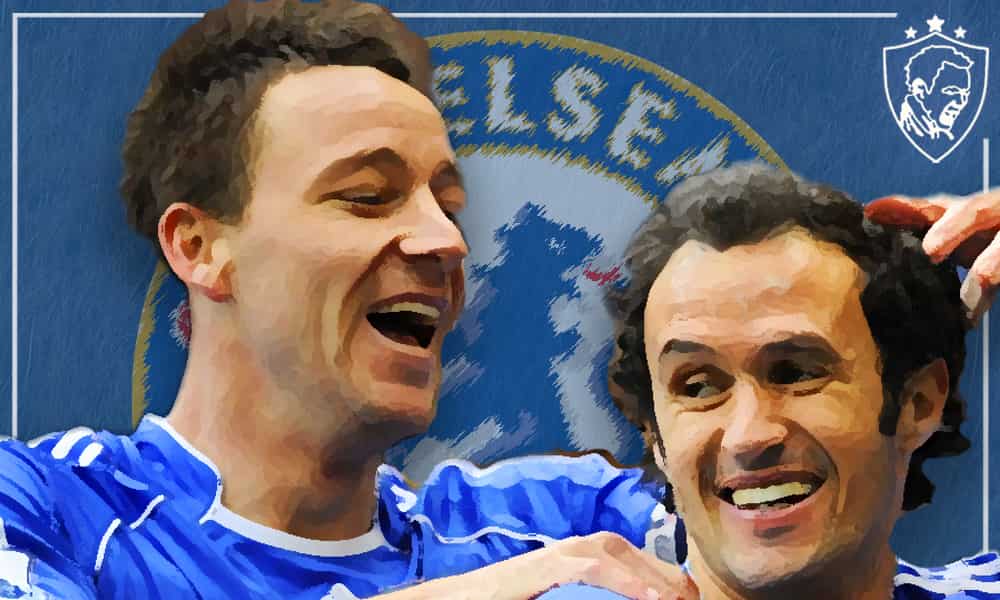 Sometimes you get partnerships with one stalwart and a newcomer, rather than both joining that journey at the same time, and that’s exactly what we have here …

As far as defensive duos go, few can come up ahead of John Terry and Ricardo Carvalho during their time at Chelsea. Following on from the introduction here, it would be the former who would be the one who’s ‘been there the longest’ and would therefore sound out whoever was going to have the nerve to plonk themselves beside him.

Over his tenure at the back for The Blues, Terry has had the pleasure of working with some real talented defenders. William Gallas springs to mind as someone who doesn’t quite get the respect he deserves, and then you’ve got the one and only Marcel Desailly – who proved instrumental in his early development into the first team. But none of them stayed (or lasted) long enough to the time John Terry and Ricardo Carvalho spent together.

Focusing on the Portuguese, it wasn’t like the Chelsea scouting room just happened upon the lad playing futsal in some anonymous garden in South America. If anything, it was perhaps the easiest recruitment trip that was ever required for someone in his position. Why? I hear you ask. Well … it might have something to do with that major Russian oligarch that came in and plunged a load of money into the club. Yeah … might be that.

When Abramovich took over in 2004, it was clear what his agenda was: ‘make this club the best in the country … whatever the cost’. Which, at the time, was never going to be a very easy thing to do. I mean, sure, the prospect of taking over a relatively smaller club with the aim of toppling rivals wasn’t unheard of, but his opponents? Yikes.

His inaugural season saw the greatest achievement in Arsenal’s history with ‘The Invincibles’, Manchester United were slowly beginning to revert to type to bring in their triplet-winning squad, and on a European scene, though the ‘Galacticos’ of Real Madrid didn’t take off as they’d liked, FC Barcelona were having something to say about that.

Having said that, Chelsea went about things the right way – by recruiting some stellar players in to complement their incumbent talent. Most imperatively, they didn’t let their demand for upfront quality to take away from their need to protect themselves at the back. So, when Petr Cech and Paulo Ferreira came through the door, it was clear a revamped centre-back pairing was needed. Enter: Ricardo Carvalho and John Terry.

A pair of surnames that would soon become ever-present on The Blues squad list for the best part of the decade from their initial union across all competitions, they initially looked like they might not suit! Usually, centre-backs need that big of yin and yang – where one’s virtues makes up for the other’s sour points.

For example, Terry is your archetypal hard-man, so maybe a more delicate one with a bit of pace next to him would work out the best for the team? Like Ferdinand and Vidic – they worked well, didn’t they? However, on paper, John Terry and Ricardo Carvalho are two peas in a pod – combative, aggressive, tough, reactive and will get any orifice on the end of the ball if it keeps it out the back of the net. Nevertheless, it worked out very well for them.

Probably because the rest of the balance in the team alleviated some of the pressure of them to be quick. Their full-backs were very dynamic, and their defensive midfielder would often drop back to help. So, if anything, it’s a good thing they were so similar – to double-up on their defensive structure with other pieces of the jigsaw sorted out.

What do you remember most of John Terry and Ricardo Carvalho’s partnership at Chelsea? Let us know in the comments below and share this on social media if you enjoyed it!