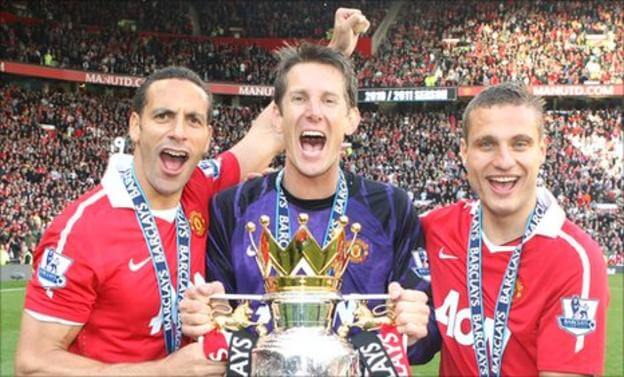 Every big footballing team needs a defence befitting its overall quality. And very few come close to being comparable with ‘The Wall’ of Manchester around 2008.

My favourite football quote of all time reads – “Attack wins you games, defence wins you titles”. Now I know what you’re thinking; “That must have been ripped straight out of Jose Mourinho’s autobiography. Surely? No?”. Definitely not. Those wise words came straight from Sir Alex Ferguson, and let me tell you, he knew how to build a defence…

Every great team starts with a goalkeeper; but finding one can prove to be a difficult exercise! A rather large price tag doesn’t guarantee the keepers sturdiness either (quiet whispers of Kepa Arrizabalaga emerge around the room). But if Kepa is chalk, Edwin van der Sar was cheese! The big Dutchman arrived from Fulham in 2005 for a reported fee of £2million and oozed class every time he was in-between the sticks.

Safe hands, reliable with his feet and a commanding leader at the back. He was everything you needed from a keeper back then and he is everything you look for in a keeper now! A huge presence in the back line provided the team with confidence to attack in numbers and always have the reassurance that Edwin van der Sar would spare their blushes if needed.

Van der Sar proved his worth time and time again throughout the campaign but will always be remembered for saving Nicolas Anelka’s vital penalty on that special night in Moscow – clinching the Champions League for the second time in his career. The legendary shot stopper has nothing but fans and is widely regarded as one of the best goalkeepers of all time. Not bad for £2million as he played a key role in one of the greatest sides of all time!

Now, let’s move on to the centre back partnership. That centre back partnership! Nemanja Vidic and Rio Ferdinand are possibly the greatest pairing you could find in World football. Puyol and Pique had great chemistry, Maldini and Baresi have an unbelievable record, BUT, I just don’t think there will be another pair quite like Rio and Nemanja …

Fast, strong, tall and they both had a defensive awareness you just don’t see in the modern game. They read the game as if it was in slow motion. Always being in the right place at the right time, eliminating the danger as early as possible and backing each other up when the other was in trouble. They were a formidable duo. Virgil van Dijk watches their highlights on YouTube before going to bed at night (I made that bit up, but you never know).

Rio Ferdinand joined from bitter rivals, Leeds United, for £30million in 2002 and quickly established himself as one of the best centre backs in the country. All eyes were on Rio as he had set his expectations very high with some great performances for West Ham and Leeds. His pace was something fans had never seen from a centre back before and his calm presence on the ball was something that caught the eye.

Nemanja Vidic on the other hand, was a little bit different. The Serbian giant joined United in 2006 for just £7million with many fans asking who this guy was. They quickly found out due to his defensive abilities, his aerial presence and his winning mentality. The pair’s individual abilities complimented each other so well that they were both picked in the PFA Team of the Year 3 years in a row!

Van der Sar, Ferdinand and Vidic (A.K.A ‘The Wall’) created one of the strongest cores ever seen on a football pitch and were all individual leaders in United’s European Glory. None received the credit they deserved at the time due to some ‘decent’ attackers that lead the line for United. Their importance will live on forever and they will always be remembered as being the main men in one of the greatest defences ever witnessed.

What do you think about this formidable Manchester United defence? Let us know in the comments below!