Why Blackburn Rovers Only Did It Once 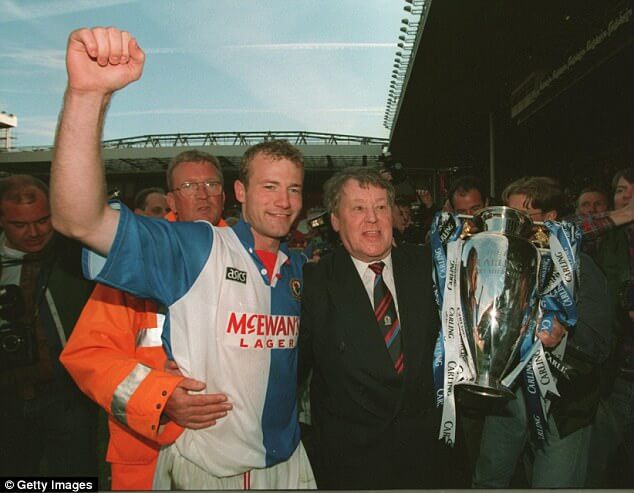 In this case, ‘it’ refers to winning the Premier League – which Blackburn Rovers only managed to do on a single occasion.

Oh … right, I forgot to provide a little disclaimer, so I might as well do it now. If you’re a millennial – or born sometime around the late ’90s, then this might come as a shock to you. So, just take a deep breath, calm yourself down (and probably get yourself some herbal tea to tame the nerves) because I’m about to reveal something strange to you.

Alright then, here it goes … there once was a time where Blackburn Rovers … were a very, very good topflight English team. And if that wasn’t too much to take at first instance, then try this one on for size – there was another time during their era nearer the top of the domestic game, where they actually won the top division. But as the title of this article suggests, the name ‘Blackburn Rovers’ was only ever etched into the Premier League crown one time … and there’s a very simple explanation for this.

From top to bottom, absolutely everything was in place to ensure that Blackburn Rovers would eventually win the Premier League title – despite the fact that the roots were laid with the view of doing this some half-decade before they actually did. But in any case, for a club to win the top division in their country, three aspects need to move in tandem with one-another in a seamless fashion and all towards a clear, singular initiative – the boardroom, the staff and the players.

Beginning with the former (which often sets the tones for the latter), Black Rovers were led by one of the most likeable and focused chairmen to ever grace the English game in Jack Walker. North Lancashire born and bred, and the same place where his family metalworks empire came to thrive, Jack Walker decided to recycle his wealth wholesomely into the very club which gave the local area its pride every weekend. And with the singular goal of taking them from where they were in the Second Division and into the driving seat of the one above. For this, he needed a man in the dugout.

He decided to aim high with his choice of Kenny Dalglish, but once the honorary Scouser was brought into the idea that Walker had sold him, it was clear that Blackburn Rovers was the ideal place for somebody as notable and influential as Dalglish to have the impact on the domestic game that he dreamed of having – but one which his own beloved Liverpool were struggling to do for reasons that Walker’s presence had removed from Rovers. It also helped that his new manager was an ex-striker – so he knew a thing or two when it came to scouting his own one to coach.

Now, obviously, purely signing someone of Alan Shearer’s elk wasn’t the sole reason for them winning the league, but bagging up to 30 goals per season is definitely a way of doing this. And either way, it illustrates my point: Walker’s money and vision led to the acquisition of Dalglish which, in turn, created a football team with the drive, hunger, spirit and consistency required for their drive towards the top of the tree. After all, this was Walker’s entire reason for purchasing Blackburn Rovers. And that’s the problem, once he’d achieved that … there wasn’t anything left to do.

It really is as simple as that, once Jack Walker had done what he wanted to do with Blackburn Rovers, there was simply nothing left in the tank to keep him excited. Moreover, his short-sightedness didn’t even extend to European competition – he simply wanted to win the Premier League and knock the bigger clubs “off their perch”. Match this loss of ambition with the deteriorating health of Walker, and the loss of talismanic striker Alan Shearer to Newcastle United the following summer, and that was all she wrote for Jack Walker and Blackburn Rovers.

Having said all of this, nothing should take anything away from Walker’s revolution at his boyhood club. And in fact, in this era of unrecognisable owners and insane amounts of money and scepticism around this leading the way, today’s game would do well to recognise the wholesome example that Walker had set. I mean, it looks tame by our current standards, innit?!

Share this post and let us know your thoughts behind Blackburn Rovers’ inability to repeat their success!

4 thoughts on “Why Blackburn Rovers Only Did It Once”