How Louis Saha Changed the MUFC Philosophy in 2004 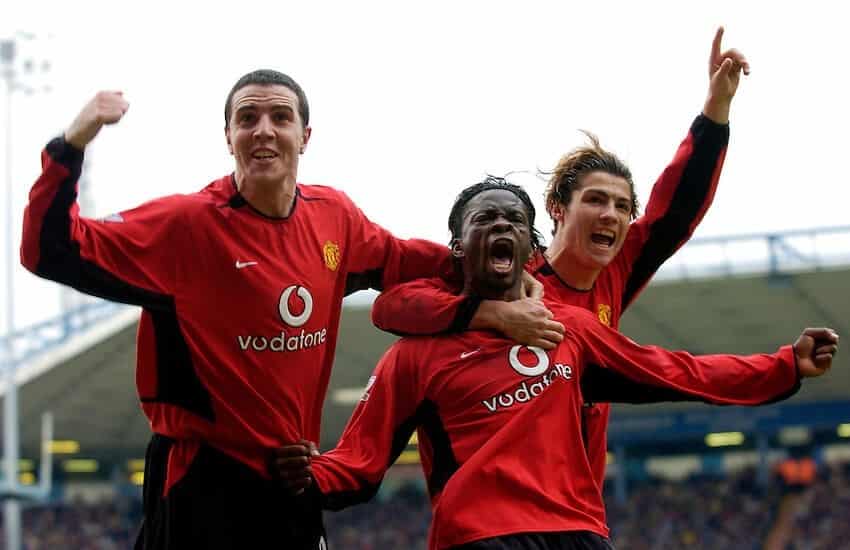 Remember when Manchester United had Wayne Rooney, Carlos Tevez and even Louis Saha in their ranks at the same time. No wonder they did so darn well!

Before I go on, I must stress that the purpose of this article is not to suggest that Louis Saha transformed the football club beyond recognition when he joined in the mid-2000s, but more to state that he was a clear example of the club reverting to type in an era where they’d lost their way.

In fact, even more ‘before’ we speak about Louis Saha, we must first tip our hats to Mr. ‘I don’t care about rivalries’ Alan Smith – who we’ve spoken about before on Ultra UTD. For it was his arrival months before the powerful Frenchman which gave fans all around the world something to look forward to when he was unveiled at Old Trafford in the summer of that year.

Though they might not have known it at the time, Sir Alex Ferguson was noticing something about his team’s recruitment. In 1999 – where the club reached successes that no other has even dared to match since then – he quickly realised that both the ageing starlets in the side and the new-found expectations of the Red Devils was never going to pan out very well.

In short, he thought it best to go for more ‘proven‘ and ‘established‘ talents, so as to quench the thirsts of his now-expectant fan base. Sure, I suppose getting some future-proofing youngsters in might not have been the best course of action given the success that they’d already had.

But as we know, this didn’t work out well for United or Sir Alex. The revered stature and bank balance of the club encouraged him to go for some of the ‘big-boys’ throughout the continent in a bid to preserve the prestige of the squad filled by those they were meant to improve upon. For example, signing Juan Sebastian Veron to bring some required flair to their midfield (only for it to peter out into a poor defensive record and lack of mid-balance), and even the largely successful acquisition of personal favourite Ruud van Nistelrooy – which discouraged a more dynamic game plan.

Fergie knew he needed to change tact, and when he realised this, he was quite fortunate that the game itself was beginning to change in his favour. As technology advanced and surfaces improved, the large, stocky and imposing immoveable forward was displaced in favour of more mobile figures to make better use of the sport’s developments. Now, the emphasis was more on players who could carry the ball from deep, rather than having it thrust toward their feet and no time to act before being closed down. And also, the Premier League itself was beginning to display a strong crop of forwards who were more in-tune with this form of football.

Namely, Louis Saha. Who had made a name for himself in the Fulham ranks – who were playing a very expansive brand of football under Chris Coleman. While there, he became the focal point for the club’s forward play in a way that many opponents weren’t expecting. He didn’t play with his back to goal, he decided to face things head on. And when Saha actually wormed his way into a goal-scoring opportunity, he would make the most of his chances. Because let’s not get it twisted, the man was cultured!

Even by looking at the above, it’s clear that the United players themselves were enamoured with Louis Saha’s attacking play and, upon arriving, I believe that his impact on that team is incredibly understated. You wanna know why? Because football is becoming all about numbers and statistics – almost the antithesis of what we want Ultra United to be. Instead, let’s look at how they played, what impact they had and what our own eyes can reveal! And when we do that, there really is no mistaking that nobody embodied United’s new form of playing than Louis Saha.

Am I making a big deal out of this or do you agree about my Louis Saha synopsis? Get your thoughts in the comments below!