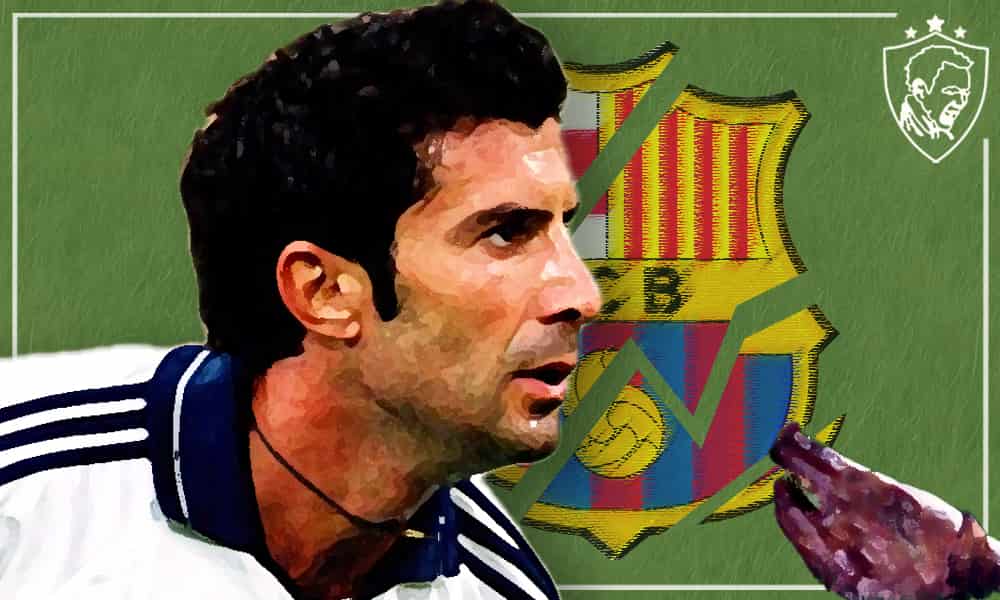 So, you think you understand what a ‘hostile atmosphere’ looks like? Believe me, you don’t know the meaning of the word unless you’ve seen this!

There once was a time where the names ‘Luis Figo’ and ‘Camp Nou’ went hand in hand – and for the best of reasons! However, like all good things, it had to come to an end. But instead of parting amicably and joining up for the odd brunch after the fact, the two camps couldn’t help but morph into an almighty rivalry.

In case you’re unsure of what we’re talking about, feel free to check out our article on Luis Figo here – for it might give a bit of context as to why things turned so sour for him. But if you can’t be arsed to click on it, then … rude … but to quicken things up, here’s the short version: Figo played for Barca, Barca loved Figo, Figo gets new contract, thinking no-one would pay his release, Perez comes to Madrid, makes up the ‘Galactico’ thing, signs Figo and all hell breaks loose …

Upon reflection, reports have since come out that Luis Figo didn’t even want to leave Barcelona at the time, after all, this was a club that had enjoyed a myriad of random successes here and there en route to restoring the prestige of their crest. And he was installed as an integral figure to ensure that Cruyff’s name wasn’t taken in vein.

To make matters even more difficult to leave, Figo was a much revered and loved figure by the Blaugrana support – proliferated in part by the fact he remained there for half a decade’s worth of turbulence at the Camp Nou. Where not even the transfer and departure of Ronaldo, nor the mistreatment of Sir Bobby Robson or disillusion caused by the enigmatic Louis van Gaal was enough to force him out of the club.

In fact, the man signed a new contract shortly before forming a new trifecta with the incoming Rivaldo and Patrick Kluivert. Where the creative former and the pacy latter benefitted greatly from the pure, unadulterated talent of Luis Figo. Who made that left-wing berth his own by the time his name was in the headlines by 2000.

During which point, the effervescent Florentino Perez was inciting attention from all over the world for his famous ‘Galactico’ policy – inspired by the one and only Santiago Bernabeu, and crafted with the attention of bringing in only the biggest and the best to the stadium which now bears his name. But the question was, would this new-look Real Madrid have the gaul and finances necessary to prise someone as closely held as Luis Figo. Well, yes.

Eventually duped into an official unveiling after his plans for a fake pre-contract to get better Barcelona terms backfired, Luis Figo was revealed to the media with the famous Los Blancos shirt following an eye-watering €62 million fee changing hands. It was a move which shocked the world more than we can even conceive of today, and left a more than sour taste in the mouths of those who felt betrayed by their once-adored star.

So, when the two forces collided again on the 21st October 2000 – Luis Figo’s inaugural return to the Camp Nou was always going to be an incendiary one. True to form, the ‘Judas‘ and ‘Traitor‘ flags were there for all to see. And the decision to keep the Portuguese on corner duty went down like a lead balloon.

” By the second or third corner I turned to Luís Figo and said: ‘Forget it, mate. You’re on your own’. I used to offer Luís the chance to take the short corner, drawing up close to him near the touchline, but not this time. Missiles were raining down from the stands: coins, a knife, a glass whiskey bottle. Johnnie Walker, I think. Or J&B. Best to keep away. Short corners? No thanks.“

Michel Salgado on the Luis Figo Camp Nou Return in 2000

The only think Mr. Salgado omitted from his recollection was the giant pig’s head which was thrown at Figo’s foot when he stepped up for his fourth corner ball of the tie. So, if there’s one thing we learnt from this, it’s that to not p*** off Barcelona fans … and that the Camp Nou security checks really need to be more thorough!

What do you remember most of Luis Figo’s insane return to the Camp Nou stadium in 2000 following his move to Real Madrid? Let us know in the comments below and share this if you enjoyed it!