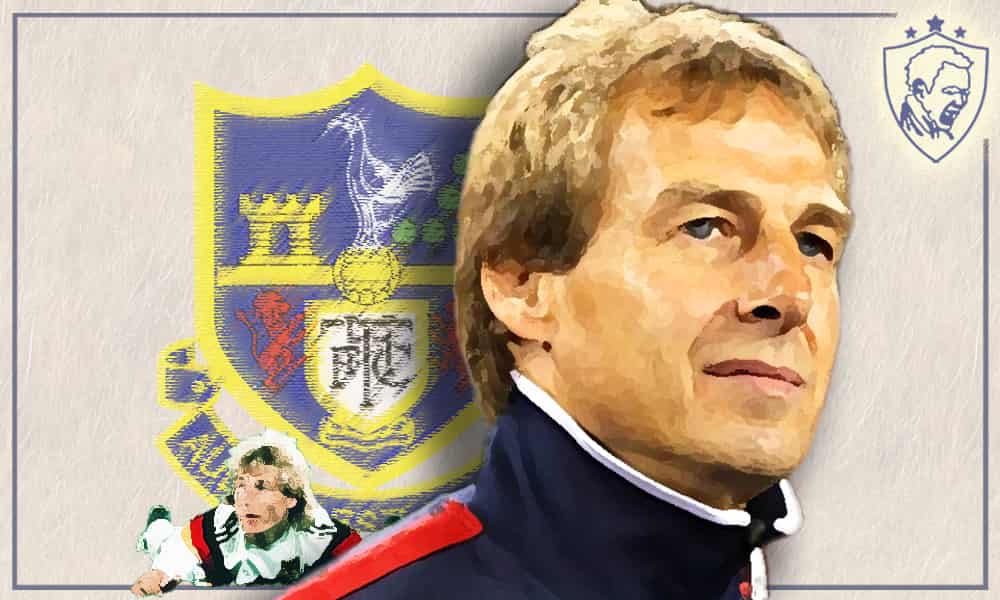 As the story goes, it was believed that Spurs were more interested in some famous Argentine than the silky German, but things change, I suppose?

Nowadays, I doubt you’ll come across many Spurs fans who won’t wax lyrical about Jurgen Klinsmann. With hindsight, they’ll remember him for being a player whose star-studded CV would lend you to believe that the Lilywhites wouldn’t be a likely suitor, but defied all odds to become a cult hero for the North London club – kinda like some other players we’ve spoken about at Ultra UTD already.

But that’s the thing with hindsight; it tends to cloud the original judgement you had – especially when the former and latter directly conflict with one-another. In the case of Jurgen Klinsmann, sure, he might have been an exciting prospect given his previous stints with VfB Stuttgart, AS Monaco and Inter Milan, but there were a number of critics of the German with a number of loaded preconceptions. Some of them fair, and some of them not so …

Back when this move was announced in 1994, there were rumours circling that Sir Alan Sugar (then the Tottenham Chairman) was most interested in bringing in Diego Maradona. But after the enigmatic genius decided to move back home with Boca Juniors, a timely yacht trip persuaded a well-traveled Klinsmann to trial out the Premier League.

A league which was relatively new at the time, many of their topflight English inclusions still retained a certain toughness which held them in good steed in the preceding First Division. So, you’d think the striker’s time in the San Siro would prepare him well for a rough ‘n’ tumble setting like the British Isles. In theory, yes it would. But in this reality, Jurgen Klinsmann found a slightly different way of dealing with his tough, no-nonsense opponents.

Instead of bulldozing his way through like a young Ronaldo or using a Christian Vieri-like movement to deceive the back line, Jurgen developed a merciless reputation for earning the referee’s sympathy more often than most. In other words, he was considered a bit of a diver. And that was something that Tottenham could ill-afford to rely on.

So, we have a German player (which was probably a bit of an issue in itself), the lack of Maradona and a proposed ‘weakling’ joining for a pretty handsome £2 million fee during a time where Tottenham were crying out for some stability. A big mountain to climb for most players, though strikers can always rely on their favourite thing to get them out of most unfortunate situations. What is that, I hear you ask? Well, goals, goals, goals of course!

Using his debut against Sheffield Wednesday as the ideal moment to earn the respect of the fans who’d judged him before they could see him, Jurgen Klinsmann got the win for his latest employers with a late-minute diving header to send the Spurs faithful home with a 4-3 win. And if that wasn’t enough, he played up to the self-deprecating style of the British people by mockingly celebrating by diving on the turf in front of the now-rapturous set of supporters.

Almost as quickly as it came, he dispelled much of the myth that clouded his transfer, and went on to average a goal every other game for Spurs during a successful season with the club. After them, he moved to Bayern Munich and Sampdoria before Sugar and co. required his aid once more in a much more perilous circumstance.

This time – in the 1997/98 season – the club were languishing near the foot of the table and needed a spark to prevent the inevitable. Enter: an emergency loan for now-Tottenham hero Jurgen Klinsmann, whose 10 goals in 18 appearances helped the club to fight for another day in England’s topflight.

How about that? A disgraced German-cum local hero saving an English come from extinction. I love this game.

What do you remember most fondly about Jurgen Klinsmann’s time in a Spurs shirt? Let us know in the comments below and share this article on social media if you enjoyed it!