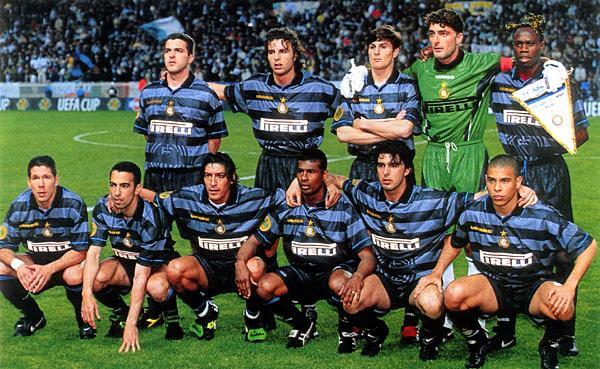 The summer of 1997 was, to put it mildly, a time of serious change for Internazionale (more commonly known as Inter Milan).

Whilst manager Roy Hodgson had drastically improved the side over his two seasons in charge , the fans and indeed the board had seen enough, and he was promptly sacked following the UEFA Cup loss to Shalke. His replacement Luigi Simoni inherited a side low on confidence and arguably low in quality. Talisman Paul Ince left for Liverpool, leaving Youri Djorkaeff and a young Javier Zanetti as perhaps the only big-name talents left in the squad. As a result, the Nerazzurri strengthened considerably, bringing in Diego Simeone, Paulo Sousa, Alvaro Recoba, and a certain young Brazilian striker called Ronaldo.

Having scored 47 goals in 49 games for Barcelona, Inter Milan paid a world record £29 million to bring R9 to the San Siro, although he did in fact wear the number 10 shirt. In the next 5 seasons, he would set about defining himself as a world class talent. His debut, however, was overshadowed by the brilliance of another debutant, the young Uruguayan attacker Alvaro Recoba( known as El Chino for his distinctive facial features) , who scored two 30-yard screamers, one a straight-driven shot, the second a stunning curling free-kick that nestled in the top left corner of the goal.

In Serie A, Inter Milan went 12 matches without loss until a 1-0 defeat to Udinese in early December, scoring 27 goals in the process. This is made more impressive considering that Simone played a counter-attacking style of football known as Catenaccio – something we’ve discussed at length when looking at players (particularly creative) who struggle in this setting. And despite a slight fall in form through the winter, the Milan outfit came into Spring still in contention for a first Scudetto since 1989. It was a contentious defeat to Juventus in April that derailed their domestic campaign.

After a nervy first 20 minutes, Juventus 10 Del Piero scored with an interesting effort, having produced a series of masterful stepovers and feints before going to shoot with his left, having the ball get trapped under his foot and then finishing with his right. It was as bizarre as it was technically beautiful. However,  the controversy came in the second half, as Ronaldo was seemingly fouled in the box, only for the referee to wave play on. With the fans, players and coach Simone all screaming for a penalty, Juventus broke forward, only for the goalscorer Del Piero to be brought down in the penalty area.

The result? A Juventus penalty and jubilant celebrations from the 60,000 Old Lady fans in Turin, with Gigi Simoni joining them in the stands following his protests at the refereeing decision. To this day, it’s considered ‘the pair of penalties’ that started a rivalry between the two competitors.

Whilst Inter Milan also faltered in the Coppa Italia (in a painful 5-1 aggregate defeat to city rival’s AC Milan) , they did enjoy success in the UEFA cup final, beating Sven Goran Erikson’s Lazio 3-0. Zambrano and Zanetti scored for Inter, with Zanetti’s effort a spectacular effort that cannoned off the bar. But it was Ronaldo’s strike in the 70th minute that highlighted how unplayable he was. Having sprung the Lazio offside trap, he dribbled towards Marchegiani in the Lazio goal, before rounding the keeper and slotting home. The goal is a perfect display of skill, technical brilliance, tactical thinking to beat the offside trap and composure to finish;  Ronaldo had become a complete forward.

Simoni had out thought, and out fought Lazio, happily surrendering possession (67% to 33%) in order to counter and threaten on the break. In all honesty, Inter could have scored 6, with Ronaldo unfortunate to have only come away with one goal. Such was the strength of the achievement, that Simoni was crowned Panchina d’Oro (Italian manager of the year). The year is also remembered fondly for Ronaldo’s goal scoring exploits, with his 34 goals representing what he could do when fit. And although injuries, particularly his knee ligaments, would take their toll on his career, Ronaldo is remembered fondly by Il Nerazzurri. To them, he is still Il Phenomeno, and was the focal point for one of the club’s best ever formations!

Get yourself in the comments and let’s wax lyrical about Inter Milan during this time. It’s more of a group activity anyway!

previousJurgen Klopp and His Liverpool Machine! (2015-)
nextHmm … Have Wolves Lost Their Spark?