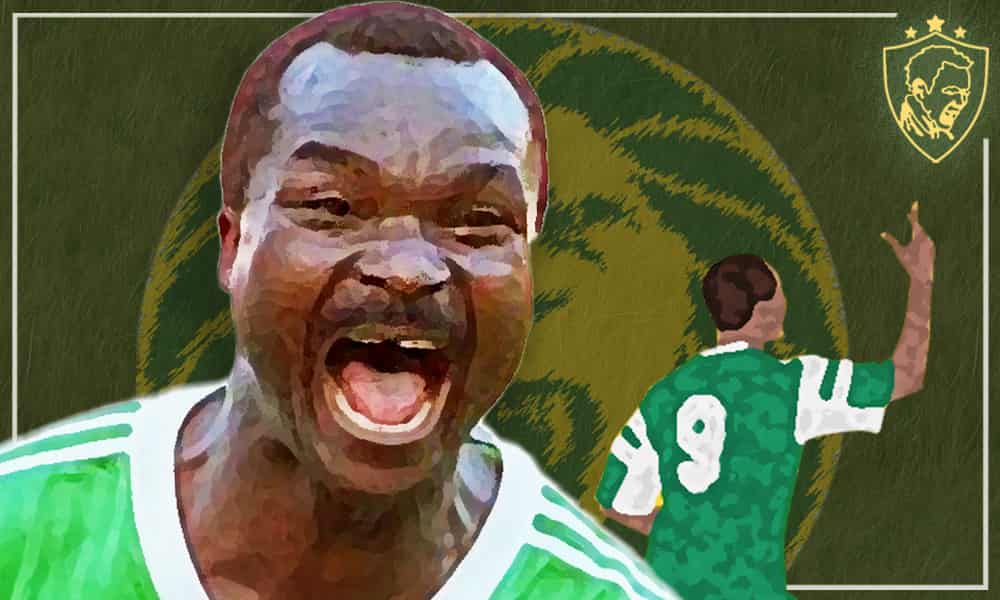 I may not have been born by the time this World Cup happened in 1994, but looking back, I really wish I was!

As far as club football was concerned, Roger Milla has enjoyed a very fair career as a professional. Mostly plying his trade with some of the better teams of France’s Ligue Un and Ligue Deux competitions, his most successful stints came with institutions Bastia, Saint-Etienne and Montpellier. Not too shabby, is it?

Nevertheless, whenever the name ‘Roger Milla’ comes up, every man, woman, child and dog will equate his greatest football achievements to those on the national stage. Most specifically, the early ’90s World Cups, where he defied all expectations to weave his way into the hearts of all those in attendance. It might surprise some to realise that he was a part of the 1984 Summer Olympics Team in Los Angeles, so maybe he was just used to the big occasion.

My own personal recollection of Roger Milla came from somewhere I doubt even he’s aware of. It was back when FIFA was a good game – because that ship has sailed – and they really went the extra mile to educate the gamers on some heritage of the game it was emulating. In this case, it was the ’06 edition, and it was some random interview with Samuel Eto’o about who his ultimate footballing hero was.

Singling out Roger Milla, I remember scouring the internet to find some clips of him, and I can understand the reason for why he’s thought of so fondly. For any fan, it’s one thing for players to be good, and another for them to look like they enjoy what they’re doing. That second bit might be a telling factor in how one feels about them.

For example – and this is a very odd comparison to make, I’ll admit – my own comparison between Neymar and Ronaldinho will lean that seesaw to the latter. Pound-for-pound, both were enormously similar, and there’s reason to suggest why one could be better than the other. But I’ll always remember how Ronaldinho played with a smile on the face, and the feelings that sort of thing instills within the audience. It makes us fall in love with them.

So, when we saw a happy-looking Roger Milla flying into both the 1990 and 1994 World Cup tournaments, it was impossible to not be caught up in the romanticism of it all. Collectively, given how low the stock was in Cameroon and their status as those ‘plucky underdogs’ who ‘deserve to have a decent time’ (so long as they don’t beat us), I would suppose that they were the ‘second nation’ of many a football fan. Never mind, when they actually scored!

Named African Footballer of the Year for his involvement in a four-goal tournament in 1990, Roger Milla somehow followed that enormous feet four years later with a single strike against Russia in the group stages. Thus, famously becoming the oldest scorer in a World Cup. In fact, even without the goal, Milla held the record for simply being the oldest player to appear at a World Cup for 20 years before it was taken from him … by a goalkeeper!

With every caress of a football which hit the back of the net (none of which were totally exceptional, but they all count), good ol’ Roger would show just how much it meant to him every time. In a move we now eponymise as his, he would run over to the corner flag and samba his way around it while encouraging the crowd to get involved. It’s a joyous legacy for one of Africa’s most treasured football players. And I absolutely love it.

Be honest, have you ever taken on that Roger Milla celebration when kicking a ball about with your mates? If so, share this post on social media below and tag a friend!