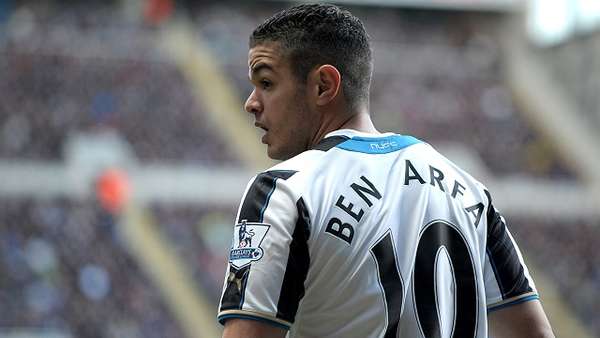 An astonishing left foot, the capability to change a game in a single moment and once upon a time labelled ‘The French Messi’ let’s glance back at the journey of Hatem Ben Arfa and the rightful hype he attracted …

David Beckham once owned free kicks, Rory Delap once owned throw ins and Hatem Ben Arfa once owned the streets … and in that order, probably! With the ability to dribble, drift and dance through an opposition single-handedly along with scoring some of the most outrageous goals you could see, it’s hardly difficult to understand why his name is so admired by many across his old stomping grounds.

Addressing the more ‘obvious stuff‘, the visionary attacker has often been labelled as one the most frustrating and wasted talents of the 21st century. The swift Frenchmen indulged somewhat of a rollercoaster career building a remarkable reputation for himself made up of memorable highs only to be crashed out by numerous lows.

However, I feel the world of football focus far too much on a player’s downfall rather than the reasons they got there in the first place, don’t you think? Therefore, the general perception on the Frenchman is defined largely on the concept of what could have been rather than the positives of what was… and wasn’t it just phenomenal.

At the budding age of 12, Hatem was selected to attend the illustrious Clairefontaine academy; a foundation which refined the likes of Thierry Henry and the more recent Kylian Mbappe. Three years later he made the jump to Olympique Lyon – giving him the opportunity to proclaim his ability to the professional game. After four fantastic and fiery years with the club, interest started to bloom with the likes of Chelsea and Ajax reviewing the Frenchman, though rivals Marseille came out on top securing Hatem’s services … until the mentioned ‘fieriness‘ relocated the enigmatic Ben Arfa to the Premier League’s inherently passionate North East.

Frustratingly, he endured a tough start there when he arrived at Newcastle on loan in the summer of 2010. Having won five league titles with Olympique Lyon (4) and Marseille (1), and winning the French Young Player of the Year award in 2008, it seemed the Magpies had captured a real gem as they looked to maintain their Premier League status after bouncing straight back from the Championship the season prior.

After a 25-yard thunderbolt saw Hatem bag the winner in a 1-0 clash with Everton on his first start for the club, Hatem suffered a double leg break due to a crunching challenge from Manchester City’s chest-kicking, no-sh*t-taking Nigel de Jong. The only silver lining was that his equally silver manager in Alan Pardew saw beyond his misfortune to offer him a four-and-a-half-year deal upon his return from injury.

Upon finding full fitness during pre-season, it was finally time to show England what he was really capable of with a ball at his feet. Yes, his stats were not exactly thrilling with only 14 goals and 16 assists in 86 appearances though another French entertainer David Ginola (or Davie G if you’re a toon fan) only managed seven goals and 17 assists during his spell on Tyneside, and he’s more loved than the ‘Tup Tup’ nightclub on a Friday night over there!

Aside the leadership of Fabricio Coloccini, the passing of Yohan Cabaye and the deadly duo of Demba Ba and Papiss Cisse, it was quite straightforward to see how a player of tremendous quality could flourish. Especially when the solidity of his mentioned colleagues freed him up to do what he did best – something which is best illustrated by his sensational solo goal against Bolton towards the tail-end of the 2011/12 season. In fact, click HERE right now to watch it for yourselves – as words simply do not do it justice!

Fittingly, Newcastle claimed fifth that season (imagine the scenes if they did that nowadays), with Hatem being at the centre of everything their fans came to adore; delightfully earning himself an international call up for the Euros 2012.

With little investment (shock!), European football and the loss of some key players, Newcastle (and Hatem himself) struggled to cope. A short loan spell at Hull City only made matters worse, before OGC Nice gambled on the very same playmaker who’d left the country in infamy only a few years ago.

“It’s a gamble for us just as it is for him. People always talk about his past, but the lad I met and talked to was a lad with character, whose word is his bond. We’re not expecting him to come here and deliver us like a messiah, but rather as a valuable new part of our squad. After a while without playing it will be complicated for him. But he is chock-full of talent and we’ll do everything we can to make sure he gets the best out of himself at our club.”

Boy did it pay off. He undoubtedly silenced the haters via his best return in a single campaign with 18 goals and seven assists. Subsequently the French giants soon came calling to set a dream move for Hatem joining the club of the city where he grew up – Paris Saint Germain. Unfortunately, things didn’t go quite to plan for club or player …

After (random) stints with Stade Rennais and Real Valladolid, the now-34-year-old sees himself at the veteran stage of his career with Bordeaux in Ligue 1.

Yet, with bundles of spectacular goals and magnificent moments to reminisce over – loving ‘ultras’ shall remember Hatem as an individual touched by the pure magic of the game. Whether he continued to reach his potential or didn’t, it really doesn’t matter. He was a passionate baller on his best of days, and particularly under those shiny Premier League lights, we got to see most of them in high definition.

Were you a Hatem Ben Arfa fan? Or have you continued to dwell on the more disappointing factors in his career. Drop your thoughts in the comments below and tell me what you think!