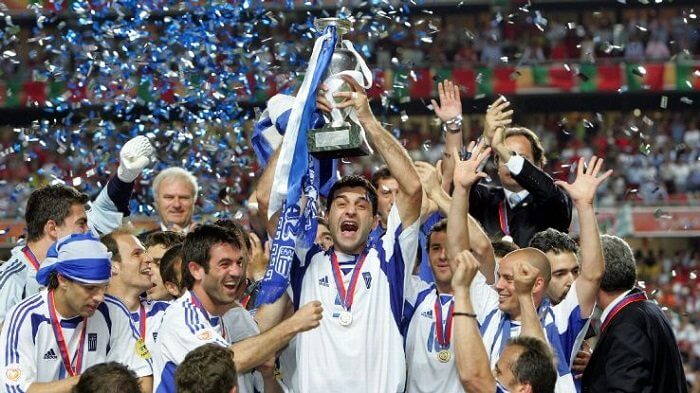 One of the greatest football upsets in history. The Cinderella Story of Cinderella Stories. Here, I want to re-live the ecstasy and chills we all felt when Greece won Euro 2004. So, buckle up …

Drawn into the ‘group of death’ Group A with Spain, Russia and hosts, Portugal, Greece were an afterthought. They had the 2nd worst odds to win the tournament. Portugal and Spain expected to progress. Were Greece being wrongly ruled out? Perhaps. But they had belief in themselves against all of it – which wasn’t even misplaced given that they had won their final 6 qualifiers and beaten Spain in the process.

Euro 2004 opening game, Portugal host Greece. Giorgos Karagounis put Greece ahead after 7 minutes from a misplaced pass by right-back Paulo Ferreira from 25 yards out, tucking it into the bottom corner. Portugal piled on the pressure, allowing Greece the odd half-chance. On the 51-minute mark, Costinha misplaced a pass leading to the ball being played through to Giourkas Seitaridis being brought down for a penalty. Angelos Basinas tucked it away. Portugal scored consolation goal in the 93rd minute, but to no avail. First hurdle down for Greece.

Spain up next. Their second match of Euro 2004, it felt like an away game with the largely Spanish crowd berating their every move. And when Fernando Morientes scored on 28 minutes putting Spain ahead, it felt like the spark had gone. Longshots from Theodoros Zagorakis tested Iker Casillas but with no real scare and the footballing laymen would have presumed that Greece’s hopes and dreams were all but over. But then …

A cross field ball by Vasilis Tsiartas sliced open the Spanish defence, finding striker Angelos Charisteas who equalised in the 66th minute. They then saw out the resulting Spanish onslaught and the game finished 1-1. In the final game, Greece went down 2-0 inside 20 minutes against Russia. They pulled one back in the 43rd minute from a Zisis Vryas header but were relying on help elsewhere to continue their Euro 2004 campaign.

News comes from Lisbon, Portugal were up; thus removing the Greek’s closest competition in the group to progress on goals scored. A feat deemed even more miraculous given the Russian Kirichenko‘s guilt-edged miss in the dying minutes of their own encounter. Stars aligned and fate building, Greece lived to fight another day – only to be drawn against France (the tournaments favourites) in the knockout stages. *Sigh*

All square until the 65th minute, Basinas plays an inch perfect pass down the wing, Zagorakis beats his man with a flick and finds Charisteas who towers a header past the keeper. Surviving a French revival, spearheaded by the now-‘Invincible’ Thierry Henry, Greece held strong; thus, becoming the first national team to have beaten the host nation and reigning European champions in the same tournament. The dream continues …

Next up Czech Republic. Undefeated. And new favourites to win Euro 2004. Hitting the bar in the opening minutes, Czech Republic were piling on the pressure, yet Greece remained stubborn enough to force a ‘silver goal’ finish. In the 105th (+1) minute, Tsiartas swings in a corner which Traianos Dellas met and put past the keeper. And just like that, against all kinds of odds, this determined, plucky Greek side made it to the final – which just so happened to be a chance reunion with opening game adversaries, Portugal!

Since then, Portugal had been on quite the tournament of their, therefore coming into the Euro 2004 final as firm favourites against their largely unaesthetic opponents. In front of 62,825 fans (most of whom would have probably predicted a Portuguese win), Greece kicked off against the wind. From hereon in, they knew it would take a steely resolve and strong defensive work rate to get anything worth shouting about. And that’s just the way they liked it!

Typically against the run of play, in the 57th minute, Basinas curled in a corner to who else but Charisteas. He beats his man, the goalkeeper’s in no-man’s land … and Greece were ahead! What is happening? A Portuguese onslaught met their unexpected opener. Yet attack on attack, save after save, Greece were holding true. And all until that beautiful sound of a referee’s whistle arrived to officialise their incredible achievement.

Was the Greece triumph of Euro 2004 the greatest ‘underdog’ story in international football history? Let us know your thoughts in the comments below!