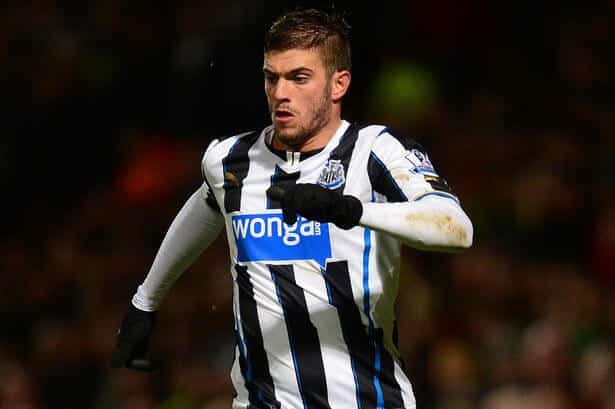 Fans of today will often reminisce over Newcastle’s older days and find solid reason to be annoyed at their current recruitment directive. And Davide Santon’s transfer is one that usually falls under the radar …

Davide Santon was a wonderkid on Football Manager 2010. If I could afford to buy the Italian and I needed a full back, then he’d be at the top of my shortlist. Although he is naturally right-footed, Santon was regularly used as a left-back and was even described as ‘the new Paolo Maldini’ in his embryonic stages of development in Milan. With his versatile and tactical qualities for a player at such a young age, he was offered his debut by Jose Mourinho at Inter. Ever since, Santon has been very vocal about Mourinho’s positive influence on his career and once said that he owes the Portuguese manager ‘everything’.

Despite interest from various European clubs, Santon joined Newcastle United in 2011 for a region of £5 million. It seemed like a surprising move (and for such a small transfer value) at the time, especially considering the Maldini-induced hype that was surrounding the defender. Nevertheless, Santon wanted to test himself in England and was unsurprisingly attracted to the Premier League. The 50,000+ capacity at St James Park and Newcastle’ diehard fanbase, which most clubs could only dream of, were probably additional factors to him moving to Tyneside.

Santon went on to appear in over 80 Premier League fixtures for the Magpies and developed an emotional attachment with the club. “I still follow and support Newcastle United as it’s a team close to my heart. Newcastle was one of the best experiences of my career. I loved the city, the fans and the club. Santon previously told UK news publication, the Chronicle.

During his time in Tyneside, Santon helped Newcastle United finish 5th and qualify for Europe back in 2012 – it was that same season we spoke about recently with Hatem Ben Arfa, you know. He was also part of the Newcastle side who beat Chelsea 2-0 at Stamford Bridge, in which Papiss Cissé scored a brace that goes down as one of the best in Premier League history. It was Santon’s pass that assisted the first goal for the Senegalese striker.

After the amazing 2011-12 campaign, Newcastle United’s results dipped massively. According to Brentford F.C.’s Co-Director of Football, Rasmus Ankersen, Newcastle’s European finish was somewhat of a fluke. And the following season where they finished 16th was more of an accurate position based on their team’s performances – harsh, but kinda fair I suppose! Worth a watch if you can spare 10-15 minutes – which you can do HERE.

Alan Pardew was sacked only a few seasons later – even after signing an eight-year contract! And Santon became surplus to requirements under the new management. Eventually he returned to his boyhood club, Inter, before signing for Roma where he currently earns a living. Sadly, his return to Italy has been riddled with injuries. This lack of game time has affected his international opportunities with Italy, as the 30-year-old has not been selected for Italy since 2013. Not to be too doom and gloom, however – after all, I hear Rome is lovely this time of year!

And in spite of his career following Newcastle United, Davide Santon clearly looks on with fond memories and hope for his former side. Only last year he had told Sky Sports that Newcastle could possibly go on and win trophies in the near future – which we all hope could be true! As things stand, they sit just one place above the relegation zone, so silverware may currently seem far away. But Santon is optimistic that once the club resolve their takeover saga then they can go onto achieve big things … much like their adoring fanbase deserves.

If you’re a Newcastle fan and have some memories about Davide Santon, then get them down in the comments below! We wanna reminisce too!