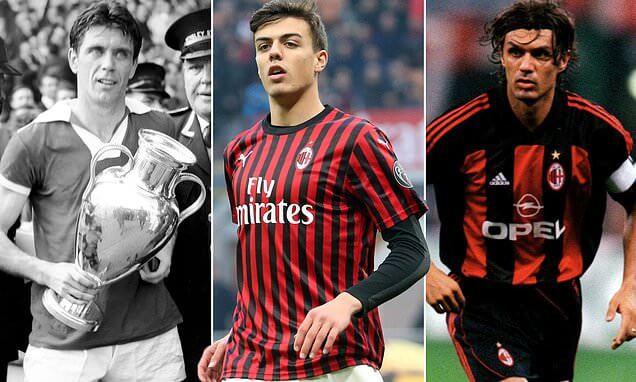 Cesare, Paolo & Daniel – 66 years, 1,321 appearances & 31 trophies: A tally which speaks for itself and shows no sign of stopping!

The Era of Cesare Maldini

The imperious dynasty began back in 1954, when Cesare Maldini made his debut as centre half for the Rossoneri, having previously played for Triestina. Only a year after he joined, he was made captain of the side, which showed his apparent leadership skills which he passed on to his son, Paolo. He went on to win four Serie A titles and one European Cup during his twelve seasons at the club.

The most impressive achievement in his career was indeed the European Cup, when AC Milan defeated Benfica at Wembley Stadium, crowning them the first Italian team to win the cup, with Cesare being the first Italian player to lift the trophy. Cesare (appropriately named after the Roman emperor) had good physical attributes, excellent technique, passing range, and an ability to command the team’s tempo.

He was known to be imposing in the air, have an outstanding reading of the game, which helped him anticipate his opponent’s actions. Despite having hundreds of appearances as a player, Cesare was only booked five times and sent off once – solidifying himself as one of the world-class defenders in football at the time … and since!

The Era of Paolo Maldini

Paolo followed his father’s steps, making his debut for the Rossoneri at the tender age of sixteen, in 1985. Paolo went on to make 902 appearances for AC Milan, a career which lasted for 31 years, winning 23 major trophies in the process. He was known as a cool and elegant defender, most notorious for wearing the No.3 shirt, which has since become an iconic symbol in Milan. Deservedly so, the No. 3 shirt has been retired at the club (maybe more deserving than Jude Bellingham’s No. 22 shirt being retired by Birmingham City).

Greater still, Paolo had occupied all sorts of defensive positions, as he was comfortable playing with either foot. Just like his father, Paolo was made captain in 1997, after the AC Milan legend, Franco Baresi, retired. Most fans would remember Maldini as having formed a defensive stronghold with Alessandro Nesta, who has gone into the AC Milan history books as a legendary defender with a beautiful playing style of his own. Paolo has continued his involvement with the club to this day as a Technical Director, which means that a ‘Maldini‘ has been involved with the club for nearly 70 years – now this is what I call tradition.

Despite all the impressive accolades, football fans must remember the most iconic Champions League Final in history – yes, I’m talking about that night in Istanbul in 2005. AC Milan were the favourites to win against Liverpool, and true to predictions, they were 3-0 up by half time. As a true leader, Paolo scored the fastest goal in history in a Champions League Final with an impressive volley.  However, an unforgettable comeback by Liverpool (we will gloss over the fact that Gerrard dived to win a penalty which helped the Reds with the comeback) saw the Rossoneri beaten after extra-time on penalties. They won it a year later, so all was forgiven!

The Beginning of Daniel Maldini’s Era

Paolo’s son, Daniel, has been entrusted to continue the Maldini dynasty, and just like his father (I’m sensing a theme here), he started his youth career at AC Milan’s academy.  He made his debut in February 2020, but contrary to the legacy, he plays as an attacking midfielder. Time will tell whether he will have the same monumental effect on the Rossoneri as Paolo and Cesare, but nobody can argue that he doesn’t have the pedigree for it. Grande shoes to fill indeed, but let’s give the kid time!

Names don’t come quite as revered as ‘Maldini’ in world football, but comment below your own favourite family down below!

previousWhat Does the Future Hold for Sean Dyche and Burnley?
nextBrad Friedel: The Definition of Consistency (2000-15)