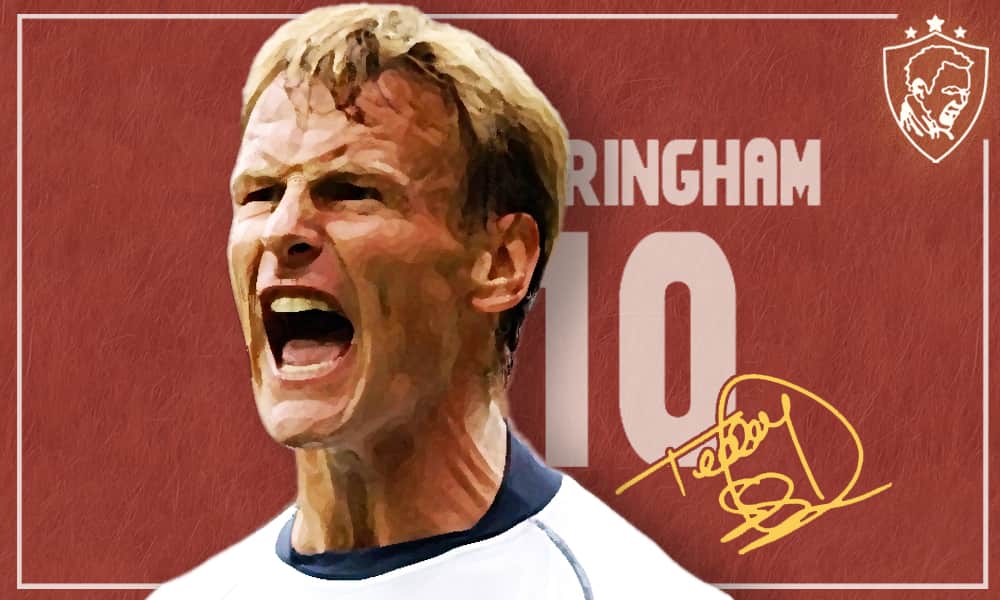 When the great Eric Cantona retired from the game and wore his Manchester United jersey for the last time on the 11th May 1997, there was an overwhelming question which was; ‘’Who’s going to replace the King’’…..

Plenty were unsure about Teddy Sheringham when he arrived at Old Trafford from Tottenham for £3.5million, with questions raised about the wisdom and ambition of signing a 31-year-old, two months Eric Cantona’s senior who had never won a major honour and had scored only eight Premier League goals during the previous season.

However, this was a player who played under the great Brian Clough in his earlier days and of course was an integral part of that England squad who lit up Euro ’96, so there was confidence that Teddy would not be phased by the challenge ahead. Even if it meant filling ‘King Eric’s almightily suave and large boots …

It was not the easiest of starts for the man from Chingford, on the opening weekend of the season making an immediate return to White Hart Lane, Sheringham missed a spot-kick against his old side, and though his new team-mates dug him out on that occasion by taking all three points, immediately it drew negative comparisons with penalty maestro from whom he’d been unofficially tasked with taking up that baton.

It was not until his fourth game of his first United campaign that Sheringham got off the mark for United, but then followed a goalless September. But instead of resting in self-pity, he licked his wounds en route to notching up seven goals in seven matches, starting with a decisive equaliser against Juventus during his first European tie.

Soon popular with many of those in the United dressing room, it wasn’t all happy families for Teddy Sheringham, and the much-publicised fall out between himself and Andy Cole, was one the football world was aware off from the get-go. However, despite barely uttering a word to each other during four years in each other’s company, Cole and Sheringham forged an efficient working relationship at United, scoring 54 goals during 4,581 minutes playing together, averaging a goal between them for every 84.8 minutes alongside each other.

In 1998, Manchester United rocked the boat a little, by making Dwight Yorke their most expensive singing of the Summer, signing from Aston Villa for £12.6 Million. And it must have been an instant worry for Teddy Sheringham as Yorke struck up the kind of friendship and partnership with Cole that all managers dream of.

Sheringham made just 10 starts in all competitions and scored only two Premier League goals in 98/99 season, yet it was this campaign in which he wrote his name into Manchester United folklore. With United chasing the Treble, Ferguson rotated his squad to perfection, with Teddy Sheringham playing as many minutes in the final eight games of the season as he managed in the previous 30.

He was given a start on the final day, when United needed to beat his old club Tottenham to claim the domestic title. However, with United 1-0 down, Sheringham was replaced at half-time by Cole, who scored the title-winning goal within seconds of his entrance. He might not have appreciated the manner of the triumph, but the victory over Spurs gave the striker his first major honour. Besides, there were plenty more opportunities to come for him …

He was relegated back to the bench for the FA Cup final against Newcastle United, despite Ferguson resting some of his big-hitters for the Champions League final later in the week. But an early injury to Roy Keane gave Sheringham his opportunity and it was his turn to make a quick impression, latching on to Paul Scholes’ disguised through ball to finish between Steve Harper’s legs. Sheringham returned the favour later for Scholes to add a second as United easily saw off the Magpies, with Teddy Sheringham named the Man of the Match. Touché!

Champions League Final 26th May 1999, The Nou Camp. Bayern took an early lead through Mario Basler which set the scene for two of the greatest moments in Manchester United’s history. Teddy was dropped to the bench despite making a huge impact during their FA Cup Win against Newcastle four days earlier. With United showing little sign of forcing an equaliser, Ferguson changed it up with a quarter of the game remaining. Sheringham replaced Jesper Blomqvist, but still Bayern looked the likelier side to score, hitting the frame of Peter Schmeichel’s goal twice, either side of Ole Gunnar Solskjaer’s introduction with nine minutes to go.

The 90th minute arrived, just as Gary Neville on the left wing won a corner. Clive Tyldesley posed the question: “Can Manchester United score? They always score.” Up steps Sheringham who got on the end of a scuffed Ryan Giggs attempt at goal to knock it past the great Oliver Khan to conduct wild scenes on the Manchester United bench. Although it was the 93rd minute where Solskjaer’s goal bound poke sparked scenes never to be forgotten by United fans – or Bayern’s – and a party Teddy described as “without a doubt the most enthusiastic celebrations of my career – we were celebrating winning the Treble, so we made it one hell of a party in Barcelona”.

Like a fine wine, Teddy Sheringham aged a treat and had his best season in a Red Shirt at the age of 35. The veteran striker ended the 2001-02 season as United’s top scorer with 21 goals in 33 appearances, a haul that earned him the PFA and FWA Player of the Year. Despite Ferguson’s pleas for him to stay, Sheringham saw Ruud Van Nistelrooy’s arrival as his cue to leave Old Trafford. The striker claimed it was “his toughest decision”, but the United bench could not compete with Tottenham’s offer of a two-year £40,000-a-week contract back in London.

Sheringham headed back to the capital a three-time Premier League title winner, an FA Cup winner, a European champion, Player of the Year, and a United hero. An intelligent player and one who, in my opinion, goes very much under the radar when talking about the greats of the Premier League era. But at Ultra United, this won’t happen!

What do you remember most of Teddy Sheringham’s influence in a Manchester United shirt? Let us know in the comments below!