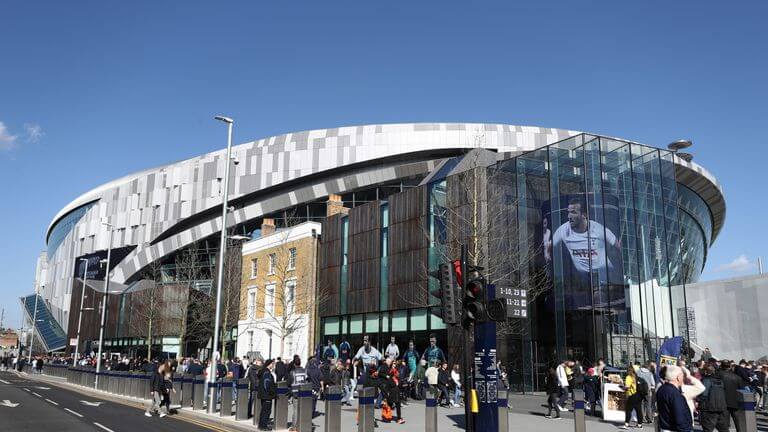 A lot of thought went into the ‘Tottenham Hotspur Stadium’ – so I guess they ran out of the stuff when it came to the name!

Joining a long list of topflight English football teams that have decided to move homes during their time in the Premier League, Tottenham Hotspur have come onto the scene with quite the doozy. Honestly, the only boring thing about this place is the name … no offence!

To begin with, they are now owners of one of the largest in-house bars in the footballing community. And though you may not think that this is very impressive, then perhaps the fact that they sell up to one million pints per game-day (pre-Covid-19) will change your minds? Plus, let’s face it: before, in the middle of and after all Premier League games, it’s more likely than not that people will use this time to get some ale down their neck – or perhaps a bottle of water or packet of peanuts. Either way, the bar is essential to the game experience. And Tottenham have cracked that code.

Making things even better, the sheer business intelligence of the rebuild has been phenomenal from Tottenham’s own standpoint. Unlike other Premier League teams, they decided to have all of their goods and services produced and manufactured in-house; meaning that they would have to take on some additional costs to produce the beers and food, as well as storing and preserving them beyond specific fixtures. But given the trade-off of having the assurance of knowing what they produce, and that they can make any change whenever they want. It’s a very good choice for the club’s operational future as far as their concessions are concerned.

But we’re not here to talk about their beer – as good as it is – because I’m mostly interested in their incredible stadium design – which includes a ceiling (kind of). From the turf looking up the stand, you’ll notice that the fans sit quite close to the turf and are steeper than usual, and it’s all by design! Thus, making Tottenham’s fans a lot more engaged in the experience and more in tune with the players they represent.

“Everyone has different definitions of what is the best. In terms of the infrastructure, with the stadium and the training ground we are probably up there with the best.”

Daniel Levy [2020]
on the development of the Tottenham Hotspur Stadium

And in order to maximise the attendees’ impact on the team’s fortunes, the sound engineers behind the Tottenham build deliberately made it so that the structure itself would encourage a louder, and more in-your-face carry of the sound that they make. It’s so simple, I love it. All they did was to plonk a concave half-ceiling atop the stand, so that when the sound waves naturally rise towards the sky, it will reverberate back and rebound back onto the turf – like a makeshift surround-sound speaker!

How amazing is that, it’s so simple and yet it makes all the difference. And trust me, I’m not even a fan of new stadium builds – and this is the first article I’ve written about a modern football home since launching the ‘Ultra Stadiums‘ section on Ultra United (‘Ultra UTD’). But can you blame me? They build a ceiling which looks a quarter-finished, just so that the fans voices can be heard. Trust me, when we’re allowed back into the homes of our favourite teams to welcome them back into competitive football, the atmosphere at the Tottenham Hotspur Stadium will be tough to beat!

Have you already been to Tottenham’s new gaff?! If so, share this post and tag us in any pics you have of the place in the flesh!

1 thought on “The Sound Ceiling at Tottenham’s New Home”

previousRonaldinho: The Greatest Back-Up Ever?!
nextYaya Toure: ‘The Pied Piper’ of Manchester City!