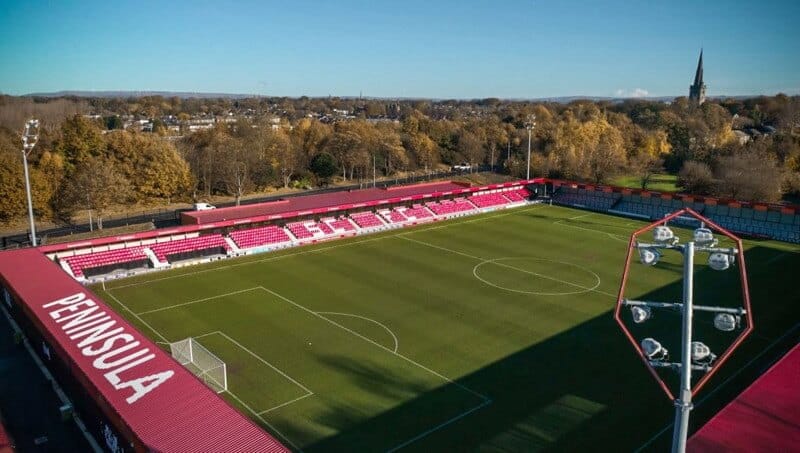 If you’ve ever watched Sky Sports’ Salford City documentary, then you’ve probably thought about making your way to down to see it in person.

Well, I’m a classic case in point. Ever since the documentary (‘Class of 92: Out of Their League‘) debuted on the silver screen in 2017, I was completely obsessed with it. For whatever reason, I prefer stories like these than all the ‘bigger ones’ out there. There’s something just so wholesome about taking a small club and transforming them into a project that benefits the community. Which, despite some public unrest from the elders there, is exactly what Salford City was aiming to do.

In case you don’t know much about the story of Salford City, then first allow me to excuse yourself so you can go and get educated somewhere else. But if you’ve realised that that was a joke and are still sticking around, then here you go: The ‘Class of ’92’ (comprised of messrs Gary Neville, Phil Neville, Nicky Butt and Paul Scholes) decided to take their enormous stature in the game and put it to good use – embarking on a project to transform a club wallowing in self-pity in the English TENTH Division and get them into the English Football League as quickly as they could.

While on this journey, their new owners required a number of things to professionalise the club and get them to stand as they would need to as an established EFL setup. This meant setting up proper pay-rolls, having full-time employees and an entirely revamped stadium to ensure that it was up to code for their forthcoming seasons on the rise in the English game. And thus, the formerly named ‘Plough Lane’ became the newly-sponsored ‘Peninsula Stadium’. A very fitting home for Salford City Football Club.

When I got there though, it just seemed … really small! I think it harks back to that old addage that things look a lot bigger on TV, and given that there was a full three years since watching the documentary’s inaugural episode to me actually trekking down to watch Salford City, then perhaps time played its part in adding some unnecessary gravitas to what I expected to see when I did go. But other than that, I was completely blown away.

I love going to non-league grounds, and you can bet your bottom dollar that a whole lot of my stories about venturing to these kinds of arenas will appear on our dedicated ‘Ultra Stadiums‘ page in the weeks and months to come. And I don’t think many will stand up against the overall experience of visiting Salford City. You walk in through the home entrance, and you’re greeted by an array of newly-installed food trucks – serving anything from gourmet burgers to artisanal hot dogs, it’s outstanding. The music is always blasting through the tannoy, the ground is littered with art and signs for the club. A truly great place to be.

The pitch itself is in really good knick, the floodlights themselves are in the shape of the badge which is a really nice touch, and there’s loads of different phrases and slogans all over the ground’s walls to keep you in-tune with their motto and values – ‘Integrity and Industry‘ – a phrase they won’t let me forget! All in all, travelling from London to Manchester, plus a hotel and the ticket cost be less than £100 for a full night’s stay and it was really worth it.

The fans of Salford City fully get behind their beloved Ammies, and they’re a very nice bunch to be around if I do say so myself. The ticket itself took about £15 from me which was on the back row of the stadium (right by their commentary area) – which was very useful as shelter from the rain and to get some much-needed information about what I was watching. We lost 2-1 against a spritely Colchester United side who held their lead for much of the game. But I don’t care, I’ve always wanted to see Salford City play and now I have – maybe next time, I’ll catch a glimpse of their owners!

Have you ever been to watch Salford City play? If so, share this and let me know what you thought!

2 thoughts on “My Visit to Salford City’s Peninsula Stadium”

previousWhat Should Jack Grealish Do Next?
nextSir Bobby Robson: More Than a Manager