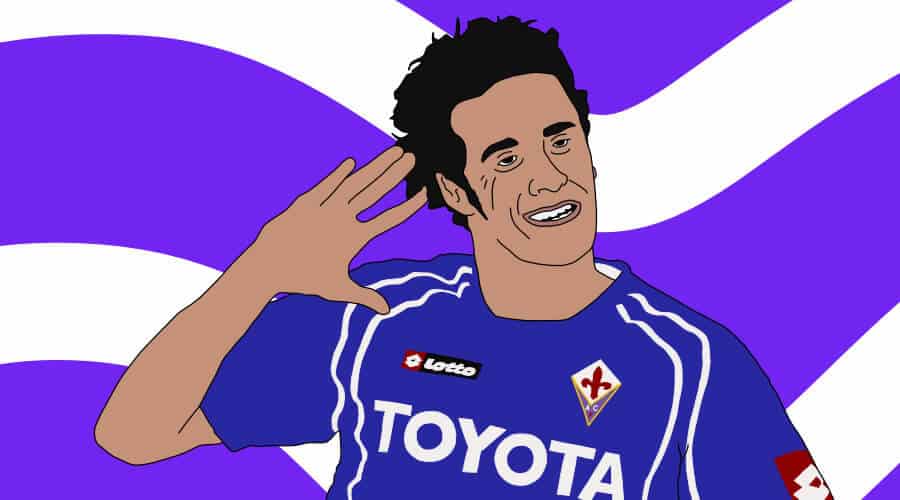 It takes a special player to stand out at one club, and an even more special one to do it multiple times! And by that judgement, Luca Toni is special!

Luca Toni is one of the most successful journeymen strikers in the history of the game – particularly on the European scene. A career which spans over 22 years at the elite level, he stuck to his title by making sure that he never spent more than two years at the same club at any given time. His itchy feet transported him to 16 clubs throughout this period, making 586 appearances and scoring 268 goals in the process. So, given the lack of fanfare that surrounds his career, we can only consider him to be one of the most under-appreciated strikers of his generation!

Toni’s professional career began in 1994, when he joined Modena. He had to work his way through the lower leagues of Italian football in order to capture the attention of the bigger clubs.  As a youngster, he had spells with several Seria B and C clubs, including Empoli, Fiorenzuola, and Treviso. These stints followed a move to the Seria A with Vincenza, giving Toni a taste of the top Italian division for the first time. He clearly was not afraid of the ‘big time’, as only after a season at the top flight, he joined Brescia.

It was exactly this spell at Brescia, which helped Luca Toni to understand what it means to be a topflight player, sharing a changing room with the likes of Roberto Baggio and Pep Guardiola will do that to a man! Their incredible work ethic and intelligence helped Toni build the foundations of an elite striker. This proves how much influence senior players have on breakthrough players, and is something we see time and time again.

Although he had some experience in Seria A, Luca Toni joined Seria B outfit Palermo, who had promotion ambitions. They were successful in their objective, as they got promoted with the help of Toni, who scored 30 goals in the 2003-04 season. By the end of his stint with the Rosanero, Toni had scored 51 goals in 80 games.

Toni’s stellar two years with Palermo caught the eye of Fiorentina who shelled out €10 million to secure his services. In his first season for La Viola, the Italian scored 31 goals. To put this impressive stat into context, it was the first time in 50 years that a player had scored over 30 goals in Serie A. As a result, Toni won the European Golden Boot – the first Italian player ever to win the award. Personal accolades aside, Toni helped Fiorentina finish fourth in the league. Such a stellar campaign had not been seen by the Fiorentina faithful since the days of the great Gabriel Batistuta (the man who famously didn’t enjoy the beautiful game).

And what a career breakthrough it proved to be. Only two years after making his debut for the Italian national team in 2004, Luca Toni helped the Azzurri win the 2006 World Cup in Germany – bellissimo!

The acquisition of Luca Toni proved to be beneficial for both the club and Toni. Having gone trophy-less in the 2005-06 season, with the help of the Italian, Bayern managed to do the double by winning the Bundesliga and DFB Pokal. Everything he touched, quite literally, was turning to gold!

Yet again, Toni was breaking records in his first campaign – he finished top goal scorer in the league with 24 goals, only the third player in the history of the Bundesliga to win the Kicker-Torjägerkanone in his first season. In the Final of the DFB Pokal, Toni mesmerized the audience by scoring two goals at the Olympiastadion Berlin, the same venue where he lifted the World Cup. This was a memorable campaign for Tonigol as those were the first two trophies he had lifted in his professional career.

The same campaign also produced the “Miracle of Getafe”, during Bayern’s unsuccessful UEFA Cup journey. Five minutes before the end of extra time (as the game had finished 1-1 in normal time), Bayern were as good as beaten, as they were losing 3-1, after two Getafe goals in extra time. However, two goals from Toni in the 115th and 120th minutes helped the Bavarians progress!

Unfortunately, the fairy-tale ended for Toni in the 2009-10 campaign when he joined Roma during the winter break, after falling out of favour with new coach Louis van Gaal, who preferred the services of Mario Gomez (even though Toni scored 9 goals in the first half of the season). Ah well!

Since leaving for Roma on loan, Toni, in true journeyman fashion, had stints with Genoa, Juventus, Al Nasir, and Fiorentina. This resulted in 64 appearances and 21 goals, not the best showing of his career, but we’ll give him a pass on that one given his prior achievements and later return.

Toni then joined Hellas Verona in 2013, which came to be the Renaissance period of his career. In his first season for the Seria A team, he scored 20 goals. Most impressively though, in his second season as the club, he scored 22 goals, winning the Italian top goal scorer award, the Capocannoniere, at the staggering age of 38! This is the true definition of “form is temporary, but class is permanent”. Absolutely outstanding.

Are you a fan of Luca Toni and any of the infinite clubs he represented? Get your thoughts on him in the comments below!