How Euro 2004 was Essential for Wayne Rooney’s Development! 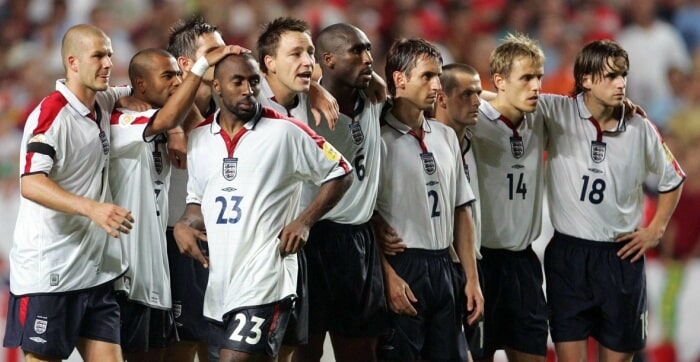 You can usually look back at a player’s career and pinpoint some key areas of progression, and Euro 2004 clearly appears to be extremely important for the impending career of Wayne Rooney …

The 2002 World Cup exit to Brazil was a tough pill to swallow. Watching the game with my primary school class in a June summer morning, Ronaldinho’s lob over David Seaman to see Brazil come back from 1 nil down to knock us out, was my first experience of heartbreak in International football. It always feels worse when you are 1 up right? Two years later, with the World Cup long gone from my memory, and a new International tournament to get excited about, Euro 2004 approached with a young me once again convinced England would go all the way.

Sven Goran-Eriksson’s squad was another level to his team two years previous. Steven Gerrard and Gary Neville were fit this time round (a considerable upgrade from Trevor Sinclair and Danny Mills … no offence!). There was the emergence of John Terry and Frank Lampard at Chelsea, David Beckham and Paul Scholes were in their primes so to speak, and well Michael Owen … wasn’t injured yet. Ashley Cole had got even better going a season unbeaten with fellow Arsenal defender Sol Campbell, and an 18-year-old Wayne Rooney had looked pretty good in qualifying and for Everton too. True quality, all round!

England faced France first in their biggest game since the World Cup exit in 2002; an encounter where duels between club team mates were abundant, and in a matchup worthy of a final, spectators were not disappointed.  England’s midfield of Scholes, Gerrard, Lampard and Beckham managed to settle early and absorb early pressure from France, before taking control with a timely Frank Lampard header (his first ever goal in an international tournament). And but for some acrobatics from fellow teammate Fabien Barthez, David Beckham could have put the game beyond doubt with the teenage Rooney earning him a penalty he wasn’t able to convert.

And just when it seemed like England’s defence would hold out … in the final minute of normal time, Emile Heskey gave away a free kick just outside the box. And it was at this moment (he knew, he f****d up), we were all reminded of the true genius of their main man, Zinedine Zidane. Without a moment’s hesitation, the France captain produced an exquisite strike across a speechless David James (rare, I know) to equalize late on.

A couple of minutes later in stoppage time, after a dodgy Gerrard back pass to James in goal, was intercepted by a wilful recipient in Thierry Henry who was subsequently brought down in the area. Clive Tyldesley’s rather dubious question of “who will be the hero? Zinedine Zidane or David James?” wasn’t one he asked with great conviction; with Zizou converting France’s winner with the big-game confidence we had grown accustomed to from him.

With England losing their opening game in such rattling circumstances, beating Switzerland and Croatia (who were no mugs, btw!) would be essential to progress to the knockout stages. Lest we forget, we saw England fold under similar pressure more recently in the 2014 World Cup, losing their opening game to Italy and needing to beat Uruguay and Costa Rica to progress. But ten years earlier, up stepped the broad-shouldered Evertonian ready to really take the game to the Swiss and dispel the ignominy of their opening encounter with the French.

With England struggling against a well-drilled Swiss defence, it was the fearless youngster who rose to the occasion; heading in Michael Owen’s chipped cross to become the youngest player to ever score in the Euro’s. Before then capping off a wonderful individual performance with a simple second to cap off a tidy 3-0 win for the Three Lions. With such quality, power and intelligence for someone so young, this was his stage to showcase to the world his ability, and they were really starting to take notice. …

Next up, England faced a tough Croatia team (*sigh) and needed a good result to ensure progression into the Euro 2004 knockout stages with all four countries still able to qualify by the last game. England got off to a terrible start in the 6th minute with David James parrying out a free kick into the path of Nico Kovac who gave Croatia an early lead. Once again England needed a goal and once again(!), it was Wayne Rooney who stepped up with another thunderous effort! Tell you what, I reckon this kid could play a bit!

In the space of 5 minutes, the complexion of Erikson’s half time team talk would have taken took a huge turn for the positive, and the ensuing freedom of England’s forward play provides some real gravitas to that hypothesis. In the second half, England laid siege to Croatia’s goal with the teenager being involved in absolutely everything. Wayne then went on to put the tie to bed by scoring a well finished 1-on-1 to make it 3-1 before the game finished 4-2 – so many numbers … so little time!

With Germany, Italy and Spain not qualifying, England had to beat Portugal in the Quarter finals to play the winner of either Netherlands (who had only won 1 game) and Sweden in the Semi’s (two very beatable sides). Never before that point had I ever been so excited for a game, the kick off being in the evening made the wait during a Thursday at school unbearable. Luis Figo, Rui Costa and Ronaldo had been villainised throughout the day and once homework and dinner was finished, I was ready to watch the game at 7:45 in the evening. Here we go …

England started with a bang against the hosts, with Michael Owen spinning and scoring a lovely instinctive goal to put England ahead after 3 minutes. Euphoria and nerves had set in, surely I wasn’t going to see England go out of a quarter final after being 1-0 ahead from a first half Michael Owen goal again?? A major setback struck in the 27th minute Wayne Rooney limped off with an injury who was replaced by … Darius Vassell. Hmmm …

n the 83rd minute Portugal’s pressure finally paid off with substitute Helder Postiga scoring a headed equaliser. Not long after, Sol Campbell thought he had won the game for his country powering in a last minute header past goalkeeper Ricardo. Shortly after brief euphoric celebrations, the referee blew his whistle disallowing the goal deeming there was a foul by John Terry in the build-up causing outrage back in England. With Sol Campbell denied a late winner like he was 6 years previous, the game was going to extra time.

After pleading with my parents to let me stay up and watch, I was about to see England in extra time of a major tournament for the first time (1998 was a blur), and what an emotional rollercoaster it was! Both teams looked tired in extra time and an outstanding goal-line clearance from Ashley Cole kept the teams level. With 10 minutes left, after a slow dribble forward where the England defence kept backing off, Rui Costa fired an unstoppable shot off the crossbar to put the hosts in front for the first time in the tie.

England were going out, and did not have Rooney to score that needed goal. 5 minutes later, Frank Lampard found that lifeline when finishing John Terry’s header down to send the game to penalties. In a shootout that saw Beckham blaze his shot over to the disbelief of himself and everyone watching (blaming the miss on a tuft of grass), and Portugal keeper Ricardo save Darius Vassell’s effort and score the deciding penalty, England were out.

Portugal went on to lose to surprise package Greece in the final, who had also beaten France and the Czech Republic all 1-0 to provide one of the biggest shock’s in the history of the football. To me, I will always look at Euro 2004 as the tournament that got away. Football is a game of fine margins we know, if Campbell’s goal was not disallowed and Rooney had stayed fit, would we have beaten the Netherlands and Greece to go on and win England’s first trophy since 1966? It’s impossible to determine, but the optimist in me says yes!

What I do know is that not only did I experience the excitement of penalties for the first time, hardening me to the agonising heartbreak that is an England shootout, but I got to see the brilliance of 18-year-old Wayne Rooney use the competition as his springboard and transform himself from exciting talent to a world class player, breaking all sorts records and becoming one of my all-time favourite strikers.

What’s your best memory from Euro 2004? Get them down in the comments below!

previousWhy More MUFC Fans Need to Give the Stretford Paddock a Listen!
nextWesley Sneijder: The [*True*] Winner of the Ballon D’Or in 2010!