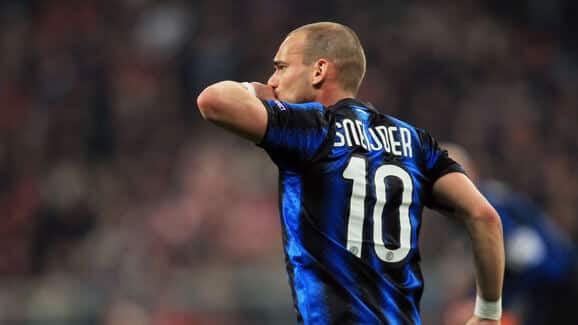 As soon as Messi & Ronaldo came onto the scene, the Ballon D’Or just appeared to be theirs … but hark back to 2010 and Wesley Sneijder was more than staking his claim!

£13.5million. That was the price for Wesley Sneijder; a playerwho became synonymous with the Shadow Striker role, especially during his historic 2010 season. And it all really began when a certain José Mourinho handed him the number 10 shirt at Internazionale that summer, as it was a vote of confidence for a player who struggled at Real Madrid and was looking to rediscover that form that earned his reputation back home with AFC Ajax..

Winning the Coppa Italia laid the groundwork for what was a historic season for Wesley Sneijder’s personal career. Although he didn’t play a major part in the final, he contributed during the knockout rounds with regular world-class performances on home and foreign soil.

With his creative passing and ability to shoot from anywhere, the media lovingly dubbed him ‘The Sniper’ – simultaneously typifying the efficiency of his end-product as well as its accuracy. And with 6 goal contributions in total for the Dutchman in the mentioned knockout stages, fans the world over would regularly tune into Inter performances with the hope of catching a glimpse of the ‘Wesley Sneijder Show’ in the UEFA Champions League.

Barcelona. The tournament favourites. Inter the lowly underdogs. Sneijder took this in stride and took the 1st leg by storm, contributing a goal and assist, running the show in the process. Despite going a goal down, Sneijder rallied the team, putting away a Milito assist and repaying the favour late on with an assist of his own to Milito, getting the 3-1 win. The Sniper had arrived. On home soil, it was imperative they secure the Serie A title. Sneijder led Inter on a 5-game win streak at the end of the season, to secure their second consecutive Scudetto. The fans were jubilant. The Treble was in touching distance …

Almost complete. Losing the 2nd leg 1-0, Inter still progressed past Barcelona on Aggregate. But now a different beast faced then. THE Bayern München. In the final you saw his Shadow Striker ability shine through, acting as the link between Milito and goal opportunities as well as his own second man runs. He laid the perfectly weighted through ball onto Milito to score the opening goal and see them through to win.

They had done it. The first ever Italian Treble. The 2010 World Cup was upon us. Given the number 10 again, the Netherlands were vying for the World Cup. The group stage. 3 wins, 2 Man of the Matches. No sweat. Here we go, onto the Round of 16. Slovakia the task. Sneijder plays the pass of the tournament, 50 yards onto Arjen Robben’s run who does the work and slides it away. Slovakia in need of a goal, the Netherlands counter, Sneijder putting the game to bed after a breakaway in the 84thminute. Another Man of the Match performance.

Brazil, an ever-present World Cup favourite. The Netherland went 1-0, putting their World Cup dreams in doubt. But the Netherlands had The Sniper. After a good spell early in the second, Sneijder lifts a cross from 40 yards out, the keeper misses, Sneijder getting his goal. From a curling corner, Sneijder gets on the end of a flick on from Kuyt, scoring his first senior headed goal and the winner of the Quarter-Final. Yet another Man of the Match performance from the maestro himself.

One game away. Uruguay in front. All square at 1-1 until the 70th minute, Sneijder makes his trademark 2nd man run, collecting the ball on the edge of the box and finding the corner, bringing his goal tally to 5 for the tournament. Netherlands score again in quick succession and see the tie out to win 3-2 behind, you guessed it, a Man of the Match performance from Wesley Sneijder. Now the World Cup wasn’t meant to be, losing 1-0 to Spain from an 116th minute goal by Andrés Iniesta, but the performances of by Sneijder were without a doubt, world class.

Finishing joint top scorer with 5 goals, earning him the Bronze Boot and Silver Ball, Sneijder had truly established himself among the game’s elite. Wesley Sneijder’s 2010 season was nothing short of incredible. Full of team and personal accolades, his performances epitomised the player we knew him to be. He was a true baller. The true 2010 Ballon d’Or winner. And the ultimate definition of a Shadow Striker.

Was Wesley Sneijder’s 2010 season deserving on the Ballon d’Or? Let us know in the comments below!