Why I Highly Recommend Watching ‘Class of 92: Out of Their League’ 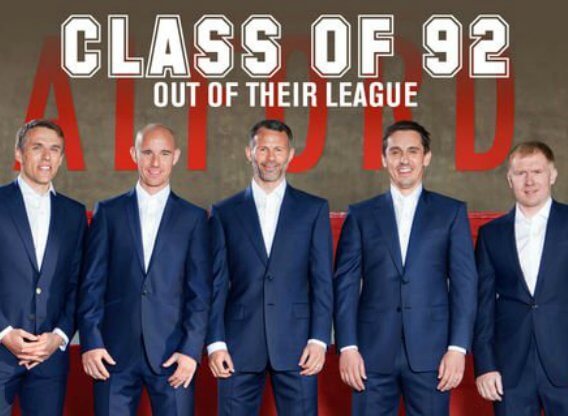 I gotta admit, I’ve used the odd illegal stream in my time, and when ‘Class of 92: Out of Their League’ got released on Amazon Prime, I nearly wept …

Finally! I didn’t have to be confronted by all of these unwarranted pop-up ads presenting numerous ‘hot singles‘ that were ‘in my area‘ and only ‘a click away‘ from ‘being mine tonight!‘ Instead, I could just sit back and watch one of my favourite sports documentary series to date.

For those who haven’t seen anything about it before – instead of encouraging you to crawl out from under whatever cave you’re enslaved in – let me just inform you that ‘Class of 92: Out of Their League‘ is a fly-on-the-wall documentary series. It’s produced by Sky Sports and follows Manchester United’s favourite band of ex-starlets, as they embark on a journey to transform a non-league team into a professional outfit.

Given their original lineage to the Greater Manchester area, it seemed most sensible to stay close to their roots when looking for this kind of project. And ‘fortunately‘ for them, there was a team languishing in the eighth tier of the non-league UK footballing pyramid called ‘Salford City‘.

Once the takeover was finalised and approved by the Football Association (which really isn’t an easy process to get right), the lads set about putting Salford on course to their aspirational mission statement of EFL Championship football in 15 years.

But in the very first season of Class of 92: Out of Their League, that was perhaps the furthest thing from their mind. Instead, it was about bringing some good players in, imposing their style on the club’s identity and merging with the existing board and fan groups to achieve amnesty in the Ammies ranks. Oh, and Gary Neville in particular had to make sure that the toilets were in good nick too. It’s the details, you see!

Without wanting to ruin it for you, I think that this first season is something I can watch over and over again. And those in charge of producing ‘Class of 92: Out of Their League’ should take great pride in their series – not least for the quality of the production, and for the integrity / authenticity upon which it was forged. From the colourful language to the unrestrained views of those who love the club, it subjects the viewer to a raw and uncut reality as to what a local football club means to its community.

Going further, it’s one of the reasons I wanted to get involved in a non-league club myself. And having been presented with incredible opportunities to help out the commercial sides of Wembley FC and even the famous Hashtag United FC, my desire and dedication to these projects can most certainly trace their lineage to the bright-eyed and bushy-tailed uni undergrad who streamed ‘Class of 92: Out of Their League’. Can’t lie, I might just re-watch it again right now for good measure!

Have you seen ‘Class of 92: Out of Their League’? If so, let us know your own review in the comments below!

previousCan a Law Degree get you into the Football Industry??
nextBend it Like … the Irish Wizard, Ian Harte!