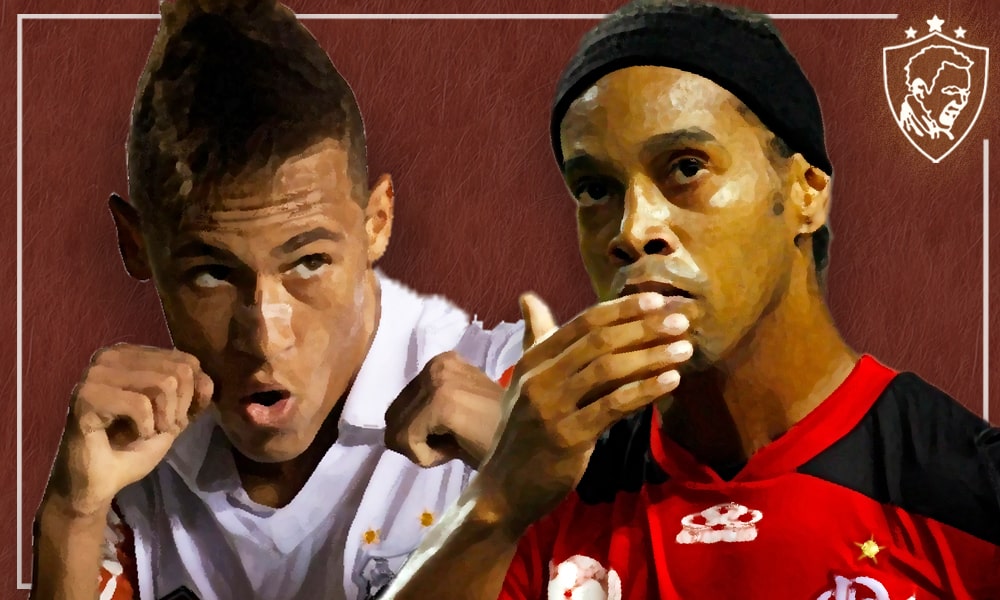 There are very few moments in football history which are as obviously symbolic of baton-passing than this one, let me tell you that much!

Just in case you’ve been living under a rock for the last few years, Neymar is a player of great technical quality. He’s a very accomplished dribbler of the ball, seems to know where to put the ball after he’s carried it a lengthy distance, and is largely responsible for the massive inflation in player transfer prices in the past couple of seasons.

Oh, and in case that rock is pretty large and you’re unaware of who Ronaldinho is, then simply imagine a smiley, slightly more accomplished version of Neymar. A player who adored crowd attention, rose to the larger occasions and was never afraid of curtailing the ‘boring’ / more efficient movements in favour of the audacious and unforgettable. And as this article leans towards, both of their respective careers mirror the others’.

Coming into one of those rare occasions where the older stalwart meets the young pretender as adversaries, Ronaldinho was arriving off the back of a star-studded career which the fresh-faced Neymar could only dream of having. But still, when there’s a ball and some grass to play on, legacies go out the window.

From the off, it was clear that audacity and electricity were in the air as Santos faced off against Flamengo in the Estadio Urbano Caldeira in 2011. As it happened, the former would be the first to cast the tie into uncertainty by taking a 2-0 lead, all before Neymar seemed to put in beyond doubt with an almighty solo effort.

Eventually given the coveted Puskas award for the best goal of that season in world football, Neymar is seen jinking past an onslaught of defenders with a range of roulettes and elasticos before curving the ball into the back of the net with the outside of his boot. An effort which brought his stature into light and his inexperience to the shadows.

Looking on with something akin to a wry smile, Ronaldinho was standing there while this young pretender looked to claim the attentions of the crowd in a way the great Brazilian dancer has done for years while he was a little nipper. So, did he stay in the background and delicately pass the baton onto this kid as he set sail on his own glorious path? Erm … I wouldn’t call it that, specifically. Well, I wouldn’t call it that whatsoever … and neither would he!

Ronaldinho set his Flamengo brigade in motion by helping to get things back to 3-2 before the break, thus bringing the game to the edge of a knife which was as sturdy as a skyscraper built on my left calf. Setting to the Santos opponents in earnest, a hat-trick from the legend himself completed the most almighty of comebacks. Not the most glorious goals of his career (barring an under-the-wall set-piece), but shucks! They all count!

With the game eventually ending 5-4 in favour of Ronaldinho’s side, there was no reason for Neymar himself to be dejected. As far as he was concerned, he proved that he was more than capable (even at that age) of rising to the big occasion and putting some efficiency behind those flashy ball skills. Figuratively speaking, it was like this game served as a reminder of how to remain humble, while also never being afraid to take the occasion by the scruff of its neck. Goodness knows how valuable this turned out to be for the enigmatic trickster!

Do you remember watching this infamous Ronaldinho v Neymar showdown? If so, let us know your memories in the comments below!