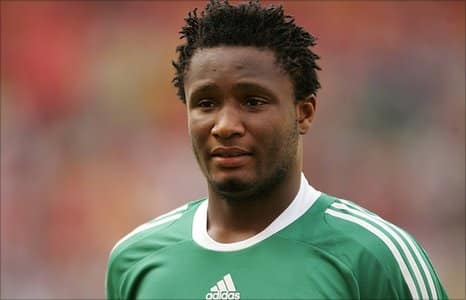 I was watching an old ‘Sky Sports’ airing of a Chelsea game from 2015, and it got me thinking a little bit when I saw that midfield.

Depending on who you support, the name ‘John Obi Mikel’ might cause you to think of the Nigerian in very different ways. Well, when I saw ‘who you support’ – I’m referring to those who are either a Manchester United supporter, or one who elects to wear the royal blue of Chelsea Football Club.

The reason being that, for a short time at least, it appeared that the young midfielder was set to begin the latest in a large cohort of Sir Alex Ferguson-led youngsters on the Old Trafford roster. All before a last-minute decision to join the Blues in the early 2000’s changed that. At least, that’s what it appeared to be at the time …

Having signalled their intent to sign John Obi Mikel in and around 2004 – when he was breaking onto the scene with his current side Lyn – it was apparently agreed between Manchester United and the player himself to join the club when he came of age in 2006. But as we know today, agents are sometimes more important than the player.

Unable to recognise their player approach as something which FIFA would consider ‘official’, Chelsea then swooped in and arranged a meeting with Mikel’s agency group. Thereafter, a significant bid was launched by the Blues to dwarf United’s amount and encourage Lyn themselves to side with him signing for the London club.

Not one to lie down in the face of deceit, Sir Alex and his right-hand man Carlos Queiroz launched an investigation to see what happened – especially after John Obi Mikel went AWOL on international duty. Some were even suggesting that the Nigerian had been kidnapped amidst claims of bribery and coercion from the Chelsea camp.

Eventually, John Obi Mikel resurfaced long enough for him to resolve what had happened, it appeared to have been just a ‘big misunderstanding’. The player himself was happy to move to the UK and ultimately wanted to play for whoever wanted him the most – and he didn’t consider the legal ramifications of speaking to one club, agreeing something in principal with them, and then not doing enough due diligence to inform them when another came.

Nevertheless, Mikel ended up signing for Chelsea and after United were able to prove record of their key conversations with the Nigerian, Abramovich’s new asset were made to compensate their rivals to the tune of £12million for their indiscretion. Altogether, I think things worked out for United and Mikel … separately.

What do you remember about this John Obi Mikel story? Get it down below!