The Early Signs of the Brilliance of N’Golo Kanté 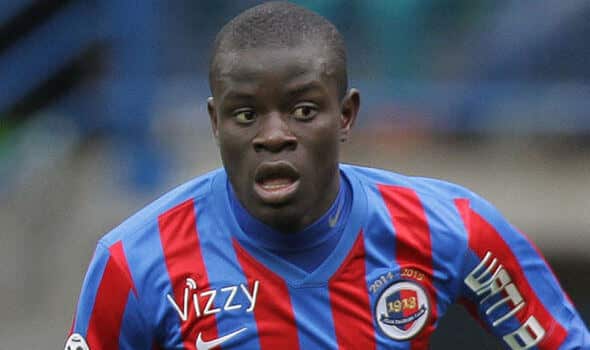 Nowadays, we know him as perhaps the most likeable multi-champion in world football, but even the greatest have to start somewhere …

Prior to becoming the loveable icon we all appreciate today, N’Golo Kanté was best known for his exploits back home in France. Even then, his inaugural professional spell with minnows Boulogne has very little coverage in the world of football commentary. Instead, it’s his succeeding role at SM Caen which ignited the flame.

Not exactly a matchstick capable of setting the Olympic flames alight, the diminutive Frenchman would have to make do with some competitive Ligue Deux football to hone his skills in the centre of midfield. That being said, his focus over two seasons there were decidedly different from one another.

Beginning with a promotional campaign in 2013/14, the eventually-perfected ‘break-up-the-play-and-off-you-go’ technique he became famous for, played second fiddle to actually joining in with the attack. That being said, he was still more the guy to get involved in the build-up to the goal, rather than striking the thing itself.

Following promotion to Ligue Un, SM Caen were already mostly written off by journalists. As with most newly-promoted sides, N’Golo Kanté and co. were lumped into a category of teams that might have been good enough to get to the tip of the mountain, but might not possess the minerals to remain there and enjoy the view.

However, little did they know that they possessed not only such minerals to enjoy their time there, but also one of the best transitional midfielders who remained front and centre throughout their journey. And most pivotally for his own career, N’Golo Kanté’s best times came against some of the league’s better sides.

With no respect intended towards lover of French football … from France … Ligue Un football doesn’t quite get the television coverage compared to the other Western European competitions. Most of the time, they’re on BT Sport within slightly out-of-tune slots, with PSG, Marseille or (at most) Montpellier in its title.

Whenever Caen were blessed with the honour of staging one of these ‘events’, N’Golo Kanté would be there doing what he’s since done so well. Back then, you could see that his tirelessness and endeavour to earning the ball back would keep him in good steed. But having since come to Leicester, won everything in sight and claiming our hearts in the process, he’s developed into the type of star that even the most die-hard Caen fan wouldn’t deem possible.

Did you know much of N’Golo Kanté at Caen? If so, let us know in the comments!