The Transfer that Made Diego Forlan’s Career in 2005! 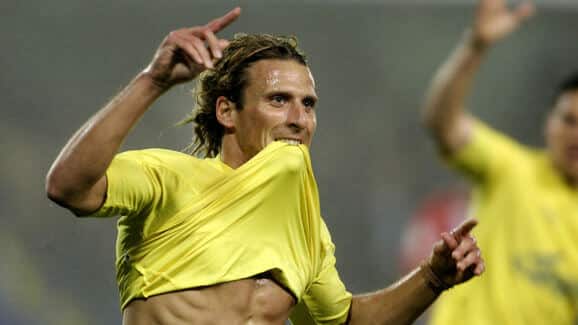 Despite his lack of consistent output for United, Diego Forlan was one of my favourite players growing up … and I was just devastated when he left Old Trafford in 2005.

You can say whatever you want about that Manchester United squad from the early 2000’s, but you can’t say that they didn’t have character. Sure, they weren’t very dependable and were as frustrating as they were exciting on any given day, but I reckon Diego Forlan doesn’t quite get the credit he deserves for what he brought to the squad.

Just by looking at the stats (which is a process I hate doing, btw – because football is about feelings, not facts), 10 goals in over 60 appearances is not a very solid return from a Red Devils striker at any point in their history. But as the likes of Louis Saha and Daniel James (for example) have shown, having the correct application to the team and providing the energy they need in the final third is an equally impressive attribute – but one that goes unnoticed.

Back then in particular, MOTD or Sky weren’t all that keen on tracking runs and assessing an attacker’s energetic output, it was all ‘how many did he score‘ or ‘should he score more‘ … and unfortunately, Diego didn’t. But what hurts is that he wasn’t much valued at club level – before United sold him to Villarreal for £2.5 million. To make matters worse, they’d actually lost about 5 M’s on the deal as they paid nearly 7 to Independiente two years prior.

You know, I’m actually not sure what kind of player that buys you nowadays, especially at the elite level. Unless you’re Leicester City who pick up bargains for dayz, you’re moving that decimal place to the right before you come across someone as talented as Diego Forlan. Ah well, ‘one man’s trash is another man’s treasure‘, innit?

Upon arriving at the Yellow Submarine, it was clear that Diego was perfectly suited to the fluidity and flow of La Liga football. His ball-carrying skills were very impressive and his boundless energy meant he could drift out wide or break between the lines before getting a shot off on goal. All he’d need was a solid team within which these qualities could be maximised. And with the solidity of Marcos Senna as a defensive midfield anchor, and the brilliance of Juan Roman Riquelme as the side’s primary creative outlet, he had exactly that!

If FIFA ever made a section which would allow an Ultimate Team card to be made in Diego Forlan’s honour, you can bet your bottom dollar that he would form a green-link chemistry understanding with Riquelme. Together, the pair were absolutely unstoppable, and in fact, I’d like them to the La Liga equivalent of Steven Gerrard and Fernando Torres when the pair linked up at Liverpool around 2008.

Where Gerrard would be the one to pick up the ball and telepathically launch it in Torres’ direction, Riquelme used a slight level of delicacy to forge opportunities for his recipient. By which point, Diego would be roaring through the left-hand quadrant of the defensive line to drive a shot through the keeper’s chest or under the legs. Frankly, the more audacious the attempt the better!

And you know what, as I write this, while I was (and still am) sad at the fact that Diego Forlan didn’t stay at Manchester United, I can rest easy knowing that he was able to fulfil his potential elsewhere. He’ll always be one of my favourite every players, and courtesy of an atypically short-sighted Fergie clanger, he will now rank as one of the all-time greats … and that’s something that I can live with.

What do you reckon then? Are you a fan of Diego Forlan? If so, what’s his mum’s maiden name? Yeah that’s what I thought. Fake fan alert! No but seriously, let’s reminisce in the comments below!