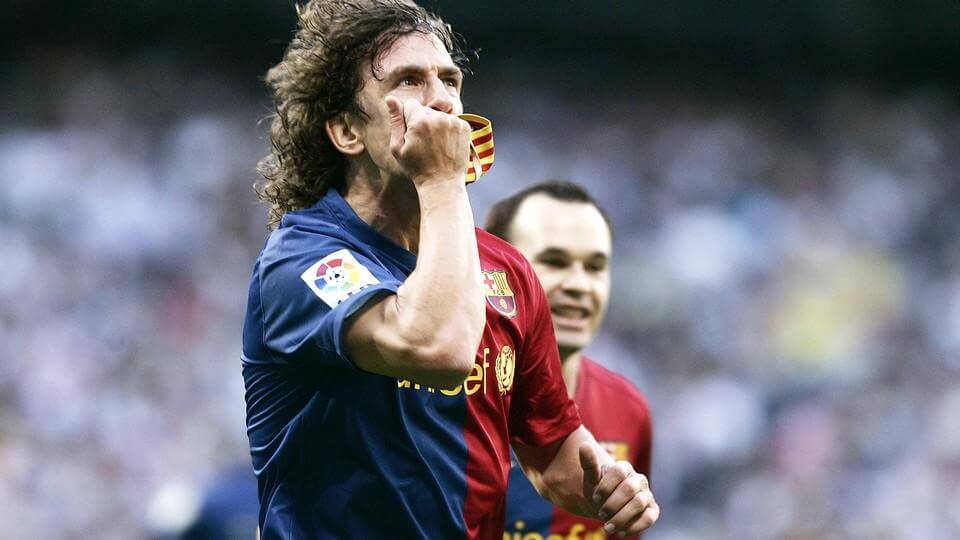 Key to all great teams is the role of the leader, an on-field general who ensures standards never drop, and Barca had arguably the best in the business in Carles Puyol!

A one-club man, Puyol played 593 games for Barca (mainly at centre-half or right-back), and captained them for a decade. Though as strange as it is to think of, it almost never happened! After joining La Masia aged 17, it was doubted whether he would be able to break into the first team and, in 1998, the club had even accepted a transfer offer from Malaga in 1998. The deal was all but done however Puyol refused to leave, determined he would stay and fight for his place!

It was this commitment and undying love for the club that Puyol became known for, along with his instantly recognisable shaggy hair of course. At 5”10 the Spaniard was surprisingly dominant in the air. He also possessed a great positional awareness and sense of timing to fly into tackles and come away with the ball.

Despite not having quite the array of passing ability you might associate with Barcelona, he was calm on the ball and would confidently stride out from the back. His no-nonsense defensive capabilities perfectly complimented the more graceful ball-playing style of Gerard Piqué, to form a formidable centre-back partnership and oversee some of Barcelona’s most successful moments to date! Xavi perfectly illustrated the captain’s importance to the team when he said: “Puyol is the key, not just because he is one of the best defenders in the world but because of his character. He never lets up.”

Puyol’s bravery and determination was epitomised during a 2004 El Clasico. Having made a double-save Victor Valdes lay stranded on the ground as the ball broke to Roberto Carlos who unleashed a trademark thunderbolt towards the top corner. Puyol quickly threw himself in front of the shot, taking the full force of the ball in the face to clear it off the line and help his side hold on to a narrow victory.

Similarly, in a 2002 UEFA Champions League match against Locomotive Moscow an opposing player had rounded the keeper and looked certain to score when Puyol sprinted back and threw himself in front of the shot to make an iconic block with his chest.  It was moments like these that earned him a number of endearing nicknames from the Blaugrana faithful, such as Lionheart and Braveheart.

But for me, the thing that springs to mind first when I think of Puyol was his level of sportsmanship. During a heated match against Mallorca Puyol was slapped in the face by defender Sergio Ballesteros. But he didn’t fall to the ground holding his face as most players would. Instead, he remained calm and stopped his teammates from getting involved by pushing them away and de-escalating the situation. True class from Carles Puyol, that.

On another occasion Barca were playing La Liga strugglers Rayo Vallecano, having already lost the league to Real Madrid and been knocked out of the Champions League. Thiago then netted a 5th in the 7-0 humiliation, and began a choreographed dance with Dani Alves when an unimpressed Puyol quickly put an end to it, grabbing them by the arm and ordering them back for the restart. Crushing loss aside, I just feel as though it went against the decorum and professionalism that Carles Puyol demanded of himself and his fellow colleagues.

Even after Barcelona’s masterclass against Man Utd in the 2011 Champions League Final, the Spaniard thoughtfully handed the captain’s armband to Eric Abidal so he could be first to lift the trophy, having just recovered from cancer in the season’s build-up to the final.These are just a few examples which demonstrate the man’s impeccable character, and it begs the question: has there ever been a player more respected by opponents? Doubt it.

Unfortunately, Puyol decided to retire in 2014, after struggling with injuries, thus bringing to end an illustrious club career, where he won 18 major titles including 3 Champions Leagues and 6 La Liga titles, in addition to a World Cup winner’s medal and European Championship with Spain. Speaking after his retirement he said: “Everyone has their own personal flair, and captaincy was what felt natural to me. Football gave me a sense of values.”

The perfect role model, respected by all, in many ways Carles Puyol was the ultimate club captain. Get your fave moment of his in the comments below!

previousThe Euros, Diversity & The Power of Sport
nextThe Transfer that Made Diego Forlan’s Career in 2005!