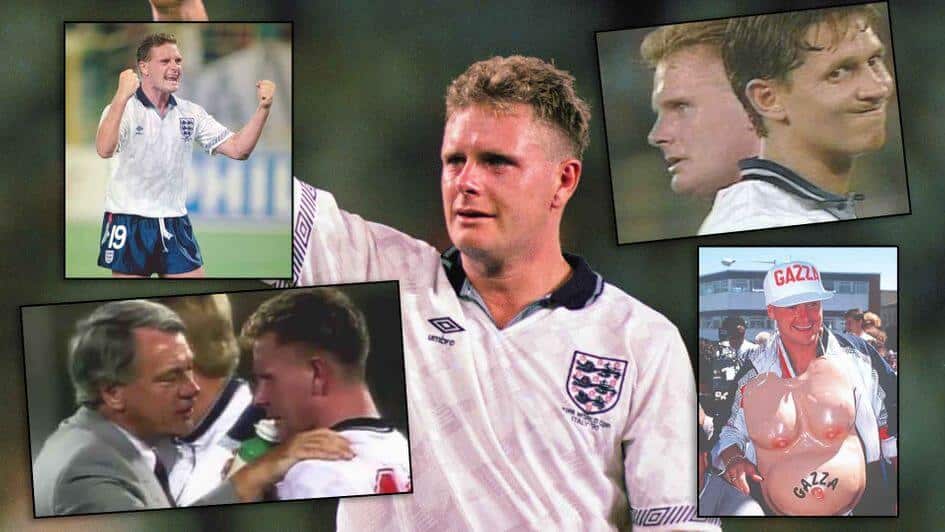 As we’ve stated earlier on in this series … his name is Paul Gascoigne – one of England’s most naturally gifted footballers. And here are two other players who show signs of potentially carrying on his example …

The third son is … Mason Mount. Whilst quiet and more reserved than Paul Gascoigne, he possesses a somewhat similar footballing brain which allows him to play forward and create opportunities. Mount has been an extremely consistent performer for Chelsea since the 2019/20 campaign and has the most appearances for England of Gazza’s sons. Extremely versatile, Mount’s best position is either an inside forward or a “free 8”, a term coined by Kevin De Bruyne, a central midfielder allowed to get forward in the final third to create opportunities.

Whilst Grealish and Foden were praised for England’s recent performances, Mount slightly went under the radar producing strong performances for his nation. A more background performer, Mount deserves the comparison to Gazza simply for the positivity in his play. Both rarely play conservatively and always look to create. Considering the countless English midfielders renowned for their negative play, Gascoigne and Mount are prime examples of progressive playmakers – the type of players all great nations need in the top tournaments.

The fourth son is James Maddison. James draws similarities to Gascoigne in terms of technical ability but also their compelling character. On the pitch, both can escape a challenge on their first touch, work well within tight spaces and create chances. Off the pitch both have infectious smiles and engage fans. Many interviews tend to be dull and predictable but Paul and James capture the audience’s attention.

Both often smile with a twinkle in their light blue eyes as they speak candidly. After a 2-0 victory over Chelsea, Maddison gave a very engaging interview discussing his desire to increase his goal involvement so he’d earn a spot for England. He also revealed Leicester’s tactics, which is very rare for a player to do so.

Fans were eager to hear more from him. Gascoigne was similar in that he’d be open, addressing criticism head on and often joked about anything he could. Both playmakers offer more of their enthusiastic characters instead of typically dreary interviews we usually see. James Maddison has only made one appearance off the bench for England. This season he has hit top form, with 13 goal contributions to date, it will be a matter of time before he’s given the opportunity that Gazza’s other sons have had.

Gascoigne’s career was plagued by internal demons and mental conditions that perpetuated controversy and addiction. He suffered many long term injuries in his career which knocked his best condition. On top of that, he was harassed and humiliated by the media. The tribulations of Gazza’s life are heartbreaking but regardless he remains a crucial individual not only for changing the course of English football, but for his fearlessness. The England national side has been berated for their fear of making mistakes.

On Guillem Balague’s podcast, Southgate confessed that England players feared failure and would play conservatively. Gazza wasn’t scared. Team-mate Trevor Stevens claimed he had ​“no concept of pressure”​. He performed with confidence and created enjoyment.

We now have four creative English players playing without fear. The Euros and World Cup approaching could be the tournaments for Gazza’s sons to showcase fearless football. While we have to wait for that, it’s clear that every performance they deliver chips away the systemic fear of failure that has cursed the England team for decades. As time goes on and Gazza ascends into English folklore, his sons carry forth his footballing legacy that England are capable of joyous, fear-free football.

What do you make of our Paul Gascoigne comparisons and do you have any additions? Get them down in the comments below!