Shay Given: ‘Any Given Saturday’ 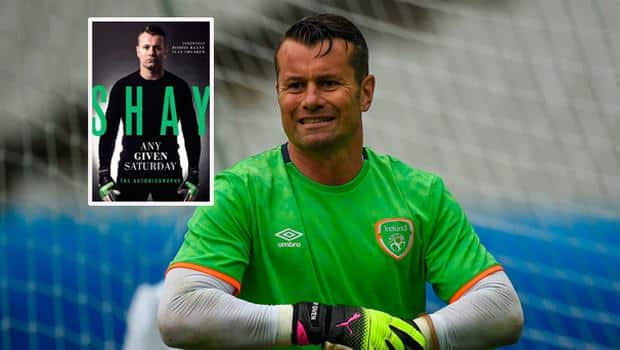 So often we see book titles be far more boring than the content. But credit to Shay Given here … and it really sets the tone!

When you’re from the UK, you are ensconced within a world where the humour is as dry as the days are short. And if you have never been exposed to this British humour, then it came come across as cold, callous and generally in poor taste. But in reality, it’s in the nature of the British people to have a light-hearted ribbing session of even their closest compatriots – and sometimes even to yourself! A sort of ‘if you can’t laugh at yourself …‘ sort of vibe. Shay Given personifies that in his autobiography.

He’s from Ireland as well! The absolute epicentre for the world of ‘taking the mick out of yourself’. which is why I find his book to be one of the most delightfully honest representations of a football career that I’ve ever written. Not least because Shay was able to carve out a very respectable career as a goalkeeper – a position which only the ‘craziest’ of people would ever dream of taking on. After all, why would you elect to take on the role which has balls smashed into your face, when you can attract all the plaudits on the opposite end of the pitch for putting somebody else through that shame?

When posed the question himself, Shay Given just admits that he held a particular affinity towards diving for the ball, and was never really all that confident with the ball at his feet. Then, once his natural reflexing abilities came to the fore, there was only ever going to be a single outcome for his talents to be exploited. Plus, when you look back over his career, you begin to realise that there were plenty of twists and turns in the footballing life of Shay Given – one which history seems to sweep under the rug. But that’s why he’s included on our Ultra UTD ‘Library‘ – to make sure that doesn’t happen.

Throughout his playing career, Shay Given has experienced the intoxicating highs and crushing lows that come with being a goalkeeper – where your every action is scrutinised to the highest degree, and with a much greater obligation to remain consistent and steady in the eyes of failure. Sure, if a striker fails to slot a way a chance, then (depending on how much of a glaring miss it was), there’s always an opportunity to put things right again and be considered a hero by the end of it; something which we’ve considered before in an article concerning Didier Drogba’s book!

This is not the case with goalkeepers, and it takes a steely resolve to continue to bounce back from such tragedies and earn the respect of your teammates and fans. Yet despite this, Shay Given remains beloved in the eyes of many a Blackburn, Newcastle, Manchester City and Ireland fan for his employment in between their sticks. Newcastle United was where he shot up to fame for his cat-like reflex ability in particular, Manchester City cemented his legacy by signing him at the earlier stages of their Mansour era (only months after purchasing Robinho). And Ireland were just happy that he was born there instead of anywhere else!

For me, I’ll always hold a lot of respect for what Shay Given achieved in his day, and will remember him fondly for how good of a shot-stopper he was. Don’t get me wrong, in the modern game (where a telepathy between mind and feet is imperative for any goalkeeper to be successful), even Shay himself admits that this is an area where he’d struggle. So we’re not saying that he was a goalkeeper whose ability transcends the generational differences of football. But he was a damn good ‘keeper, and if you want to understand more about his mentality for remaining loved and consistent at the top level. Then please do check out his book below.

Click HERE to be redirected to the Amazon (UK) listing for Shay Given: Any Given Saturday. A good book, by a good lad!