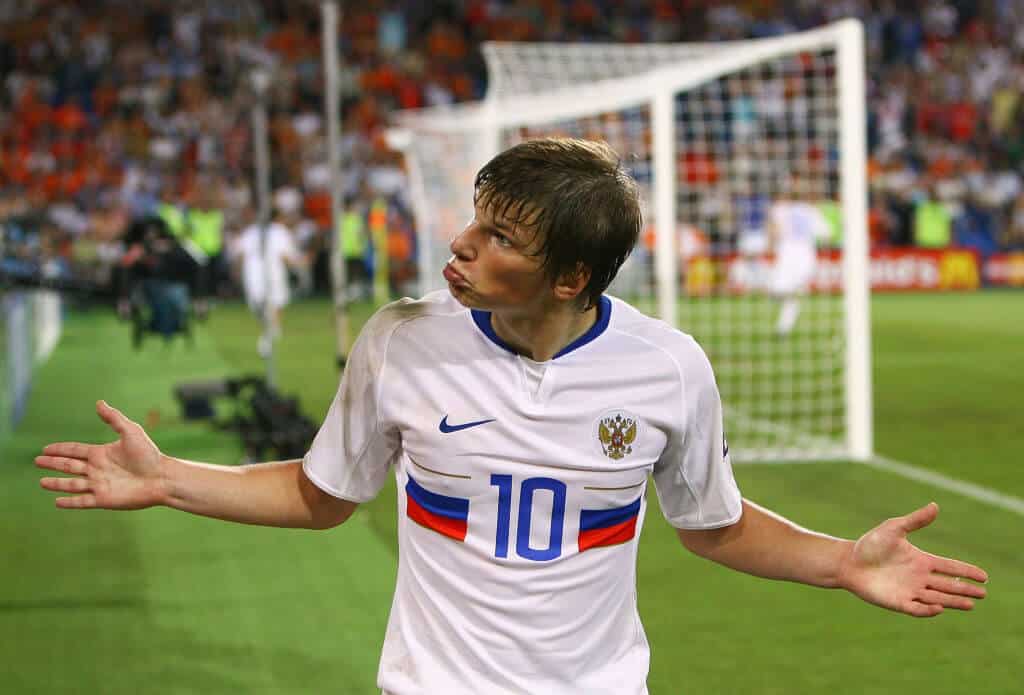 It was a European Championship campaign that largely went to script with Spain being crowned its inevitable victors. But Russian were certainly the surprise package of the wider Euro 2008 bunch …

No team in my lifetime has experienced a ‘zero to hero … and then back to zero‘ run quite like the Russian national football team of the late 2000s. When I was eight years old, I was about to move to England, having spent my life until that point living abroad. Since that summer, nothing has captivated my attention as much as watching an underdog Russian team battle their way to a semi-final in Euro 2008.

Anchored at the back by CSKA Moscow legends Igor Akinfeev, Sergei Ignashevich and Vasili Berezutski, with Zenit’s Yuri Zhirkov, Aleksandr Anyukov and Konstantin Zyryanov pushing the ball up the wings to the two players who would emerge as the stars of the side: strikers of Roman Pavlyuchenko and Andrei Arshavin. This group of promising young players managed to, even if only for a brief period of time, create massive waves in European football.

However, things weren’t always as simple for this ragtag band of Russian footballers. Qualification for the 2006 World Cup had seen Russia knocked out on goal difference by Slovakia, failing to secure wins against weaker neighbours Latvia and Estonia. Such an embarrassment brought about change at the top, with Guus Hiddink taking over the mantle of manager.

Over the next couple of years, the team began to build. A shock loss to Israel nearly jeopardised their Euro 2008 qualification campaign, but an upset win against England meant they managed to sneak through the group by one point. From there it was only up. Wins against defending champions Greece and Sweden meant they made it through to a quarter-final against the Netherlands, where Russian football reached its peak of the 21st Century.

Heading to extra time after Ruud Van Nistelrooy’s late equaliser, up stepped Andrei Arshavin. A cross from an almost impossible angle down the goal line found the feet of Dmitri Torbinksi who tapped it in with ease, and another moment of magic four minutes later bringing the game to 3-1. A Dutch team featuring many of the same players who would make the 2010 World Cup Final was stunned and Russian football was standing on top of the world in that moment. Well, almost …

A 3-0 loss to eventual winners Spain in the semi-final put a temporary dampener on things, but there was still a lot of promise in Russian football going forward. With Arshavin, Pavlyuchenko and Zhirkov signing lucrative Premier League deals, the Russian national team looked ready to build for the future. This optimism was short-lived. A loss on aggregate to Slovenia meant Russia failed to qualify for the World Cup in South Africa, and that ageing squad never managed to reach the same peaks.

Nevertheless, the memory of 2008 is one I will treasure for the rest of my life. Whilst Russia’s revenge on Spain on home soil at the 2018 World Cup was satisfying, it just wasn’t the same as watching the scrappy flair Russia played with at Euro 2008. That team packed more of a punch and filled the role of the underdog well. This may have only been a flash in the pan, but Russian football’s upset of the Netherlands will live on in my memory forever. Russia may return to such lofty heights one day, but not much will top the joyful feeling of watching Arshavin’s game-winning strike.

Comparing to my Euro 2008 memories, what short-lived run will you always remember? Stick them in the comments below or tweet them to us!