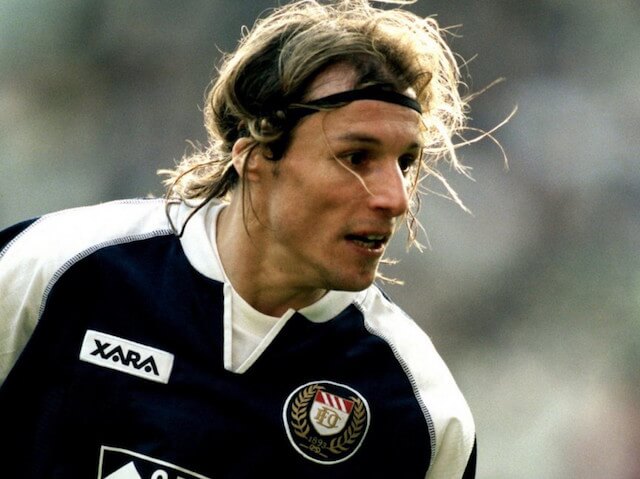 The World Cup and Serie A’s own Claudio Caniggia’s move to Dens Park at the turn of the millennium remains one of the most surprising and delightful transfers in Scottish football history!

Back in the early 2000’s the Scottish football landscape was very different, with Rangers and Celtic splashing out large sums to bring in some of Europe’s biggest names. The spending spree which started in the 90’s had seen the ‘Old Firm‘ acquire the likes of Brian Laudrup, Paulo Di Canio and of course Paul Gascoigne.

By the start of the 2000-01 season Tore Andre Flo had left Chelsea for Rangers in a record £12million deal, with Chris Sutton also swapping the blues for the green and white hoops of Celtic. But this level of spending was very much limited to the Glasgow giants, so you could imagine the fanfare surrounding the speculation of an icon like Claudio Caniggia’s signing for the likes of Dundee … no offence, btw!

The Argentinian’s career had seen him play for both River and Boca in his homeland, and for the likes of Atalanta, Roma and Benfica in Europe. But it was starring for Argentina, that really ensured Caniggia became a global name, his goals propelling the side to the 1990 World Cup final as he formed a magical strike partnership with close friend Diego Maradona, despite losing the tournament’s finale against a stubborn West Germany side.

On the east coast of Scotland, Dundee’s wealthy local owners Jimmy and Peter Marr had appointed a new management team of Italian brothers Ivano and Dario Bonetti. The pair quickly set about utilising their Italian football contacts to transform the squad with a number of foreign imports.

By this time, Caniggia’s career happened to be stalling. He had developed a reputation for his off the field lifestyle, particularly after serving a 13-month ban for cocaine. The 33-year-old had also been released by Atalanta and was apparently considering retiring when former teammate Dario Bonetti came to him with the proposition.

Rumours of the signing began to spread around the city, but it still seemed a far-fetched possibility for even the most optimistic Dundee supporter. And then it happened. On the 3rd of October Caniggia arrived in the City of Discovery. The footballing world were stunned. The club shelled out a record salary of £10,000 per week but it was an opportunity that simply couldn’t be missed.

The signing brought global attention to the city, with international magazines running features on the club. Blonde wigs flew off the shelves in local shops, as did replica shirts, with the club store even running out of the letters N and G! Upon his arrival Caniggia said his decision to join the dark blues was motivated by a desire to force his way back into the Argentina squad for the 2002 World Cup, a statement that raised more than a few eyebrows.

On the pitch Caniggia was an instant hit, coming off the bench to score a last-minute debut goal away to Aberdeen and send the Dee fans wild. A week later, he followed this up with a delightful 20-yard lob in his home debut against Motherwell, after spotting the keeper off his line.

He also developed a knack of scoring in big games, such as a famous 2-0 win against Rangers at Ibrox and a derby against close rivals Dundee United, after which he further endeared himself to the Dundee faithful by pulling pints for supporters in a local pub. Over the course of the season Caniggia would contribute 8 goals in his 25 appearances. But his impact went far beyond goals …

He was an entertainer, lighting up every game he played as he helped Dundee to a sixth-place league finish. He won the club’s player of the year award and was nominated for PFA Player of the Year, beaten only by Henrik Larsson. It was an odd match, but Dundee became the perfect place for Caniggia to revitalise his career.

In January 2001 he signed a two-year contract and even said he would love to retire at the club. However, his performances had attracted major attention and, as quickly as he had arrived, he was gone, lured away by Rangers with prospect of European football and higher wages. He joined the Ibrox side at the end of the season, where he would further demonstrate his class, becoming a fans favourite yet again and winning a place in the 2002 Argentina World Cup squad.

The story of Claudio Caniggia and Dundee was a very short love affair, but one that left a huge mark on the people of Tayside, giving them some of their greatest footballing memories.

What do you reckon the modern-day equivalent of Claudio Caniggia to Dundee would be?! Let us know in the comments below!