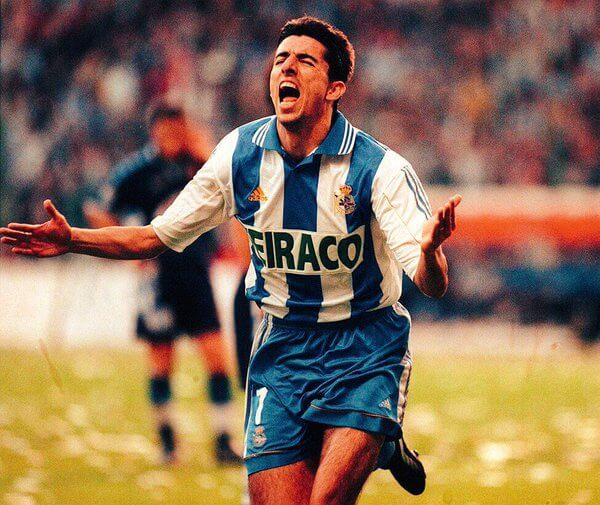 Across his illustrious CV, Roy Makaay’s lethal ability to strike the ball terrorised defences all over Europe but, it was his remarkable achievements at Deportivo La Coruña that are still remembered today.

Cushioned volleys, neat finishes, audacious long-shots. You name it. He did it. The endless YouTube highlight reels, accompanied by their customary ‘inspirational’ noughties soundtracks, are a must watch with this man. His positioning abilities highly remarked upon by ex-players and managers, drawing comparisons with the likes of Bayern marksman Robert Lewandowski in the modern game. Neither known for the wondrous skills associated with many current forwards, rather their ruthless approach to adhering to a striker’s most primitive instruction.

“We used to say about Roy Makaay: if one drops to him, it’s in.”

Born Rudolphus Antonius Makaay, the Wijchenaar striker made his professional debut in 1993 at the age of 18 for nearby team Vitesse Arnhem. After topping the club’s scoring charts in his final three seasons, he would depart for the sunnier heights of La Liga’s Tenerife in 1997.

However, such ‘heights’ wouldn’t last long, as Tenerife were relegated to Spain’s Segunda Division two years later, leaving Makaay fleeing to the Spanish mainland to make his name. Deportivo La Coruña the location. Not exactly a ‘marquee move’. Makaay’s modest achievements to date had provided little fanfare, and few expected him to be so good upon joining. Nevertheless, a hat-trick on his debut soon dispelled any doubters’ discussions, and rapidly set the tone for a truly breathtaking year in á Coruña.

Having almost been erased from existence eleven years previously, Deportivo’s success since returning to the La Liga had surprised many. They’d finished third in 1993 and could not have come closer to winning their first league title the following year: It was the final day of the 1993/94 season. All Deportivo had to do was score a last-minute penalty to beat Valencia. Then the title would be theirs, only three years after promotion. Miroslav Đukić stepped up, the pressure of the entire region on his back. He timidly struck the ball into the goalies’ arms. It was not to be.

The pain of this near miss felt everlasting for many players and fans. And Roy Makaay’s inaugural season provided an unexpected opportunity to put it right. After finishing 12th and 6th in the preceding two years, a title challenge looked unlikely. But Makaay’s arrival changed that. His 22 goals proving the crucial difference between a top four challenge and a title fight. ‘Super Depor’ raced to the top early in the season, the mix of a skilful Brazilian core and a ruthless man up front allowing them to stay there for 6 consecutive months. It often appeared more a coronation than a close-fought fight.

Football’s never so simple … A late season wobble threatened to repeat the horrors of 1994, with the title race going down to the final day. As the players lined up against Espanyol, the crowd nervously watched on, hoping that history would not deprive Deportivo again. All they had to do was avoid defeat. Donato and Makaay’s first-half goals made sure of that, allowing the club to seal their first and only title in comfortable fashion.

With the final whistle blown, the fans stormed onto the pitch, covering every blade of grass, ripping the shirts off the players backs. It was a joyous occasion in Galicia. And here’s what Makaay himself had to say about this wonderful moment – bearing in mind that this was made long after his succession of post-Depor playing achievements …

‘I won two titles in Germany with Bayern and they’re all great, but doing it with a club that doesn’t expect it, being part of the team that wins the title for the only time in their history, makes it more special.’

Diego Tristan’s arrival in á Coruña, followed by two years plagued by injuries and misfiring form, threatened to confine Makaay to the heap of media-fuelled one-season wonders. And I suppose only 12 goals in each of the 00/01 and 01/02 seasons proved an underwhelming return for a striker at a now title-challenging club.

His final year at Deportivo couldn’t have been more different: bursting back into the team with sublime performances on both domestic and European fronts; infamously scoring a hattrick as Depor downed Bayern 3-2 at the Olympiastadion; and taking home Europe’s Golden Shoe with a world-beating 29 league goals. Not bad. Ever a man of grace, Makaay ordered Golden Shoe replicas for the rest of the squad in appreciation of their role in his success. Always helps when a player has an ounce of humility about them, doesn’t it?

Due to unkept promises and a general distrust between the club management and Makaay, he departed for Bayern Munich in 2003, ending his historic stint at Deportivo in practise but immortalising his status in the region.

For many at the club, Roy Makaay remains a much beloved symbol of their most successful years. When they challenged Europe’s elite and stole Barca’s top spot in Spanish football, even if only for a brief, fleeting moment. A far cry from their current position in Spain’s Third Division … but they were good times, indeed!

What do you remember most about the dynamic Roy Makaay at Deportivo? Get your memories down in the comments!