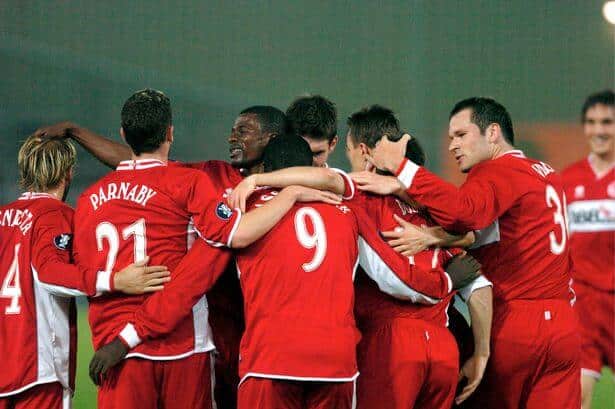 England fans beware, Steve McClaren may receive praise in this article … that’s right, ‘The wally with the brolly’ is about to feel good about himself, and rightly so! Widely condemned as ‘The man who couldn’t even take England’s ‘Golden Generation’ to the Euros’, few remember that, just over 18 months before England’s fateful rainy night, McClaren had led a soon-to-be Championship club to the highest heights of European football.

It’s 2004-2006, you’re thinking of one team: Mourinho’s Chelsea. As they bought their way to back-to-back titles, a club in the North-East of England was experiencing the most successful era in its history: Middlesbrough. League Cup Champions in 2004, their first ever major trophy; a record seventh-place Premier League finish in 2005; and an unrivalled European fairy tale in 2006. There is no doubt that this was Boro’s finest side. A history-making team. Here’s a few of its more notable inclusions …

Clearly a squad that deserved to win a thing or two. Yet, there is little fanfare on the Riverside for the man who put it all together: Steve McClaren. Few fans sung his name or rued his departure for the England job. This despite leading a club, who had never been in Europe before, to the UEFA Cup final. And they didn’t half make it dramatic along the way …

After emerging from the group stages and impressively edging past Stuttgart and Roma, Boro faced European regulars Basel in the Quarters. A tough task. Even tougher when you lose the first leg 2-0 and go 1-0 down in the second. Four goals were needed in a remaining 67 minutes. Impossible, surely? Mark Viduka didn’t agree, his double on either side of half-time gave the Boro fans hope. Then, with just over ten minutes left, a stunning 25-yard strike from substitute Hasselbaink sent the stadium into a frenzy. One. More. Goal. The astonishing comeback was completed by Massimo Maccarone in the 90th minute, a near-post rebound sending the boys in red to the Semi-finals.

A remarkable night. Even more remarkable was that they repeated the same feat a few weeks later. Steau Bucharest the opponents. Already 1-0 up in the tie from the first leg, Bucharest shot into a two-goal lead at the Riverside within 25 minutes. Boro needed four, it couldn’t happen again … It did. Forget Istanbul, this was the Riverside Stadium and they did it twice. Goals from Maccarone, Viduka and Riggot set up another grandstand finish. A minute on the clock, Downing picks up the ball on the left-hand side, sprints down the wing and fires a hopeful cross into the box. That man Maccarone’s there.

He thunders a header into the back of the net and the crowd erupt into unrestrainable joy. They’d done it. Middlesbrough had made it to the UEFA Cup Final. Maccarone, the cult hero, had taken them there. Sadly, there was no fairy tale ending, only an anti-climactic 4-0 defeat to Sevilla but, the memory of those wonderful Thursday nights at the Riverside would never be forgotten.

Soon after, McClaren was gone and Middlesbrough’s most successful era went with him. Three years on and they’d be relegated, a sign of the struggle and instability without McClaren at the helm! Boro fans saw it differently. For many, the successes were the achievement of Steve Gibson (the owner) and his continued investment in the club. During McClaren’s time in charge, Boro’s net spending was the 8th highest in the league so arguably, with only one top ten finish in his reign, you could say he underachieved with the players he bought.

The fans saw him as the creator of a ‘dull’ brand of football, a disappointment with the talented group of players he possessed. To them, it was these star players who had brought silverware and created those European nights of magic, not the manager himself. In his defence, McClaren moulded and built this team so their success was his. He cannot be simply written out of the story. After all, he’d made the key attacking substitutes that turned the ties against Basel and Bucharest, even if it took a bit of convincing from his assistants …

It’s a similar debate to the one at Stamford Bridge, was it the money or the manager? One thing’s for sure though, these were Middlesbrough’s finest years and I bet The Boro would give anything to have them back.

If you’re a Middlesbrough fan, then get your honest opinion of this side in the comments below! We wanna hear about all your memories of this era!

previous‘Zonal Marking’ by Michael Cox (May, 2019)
nextWelcome to Vale Farm: The Home of Wembley FC