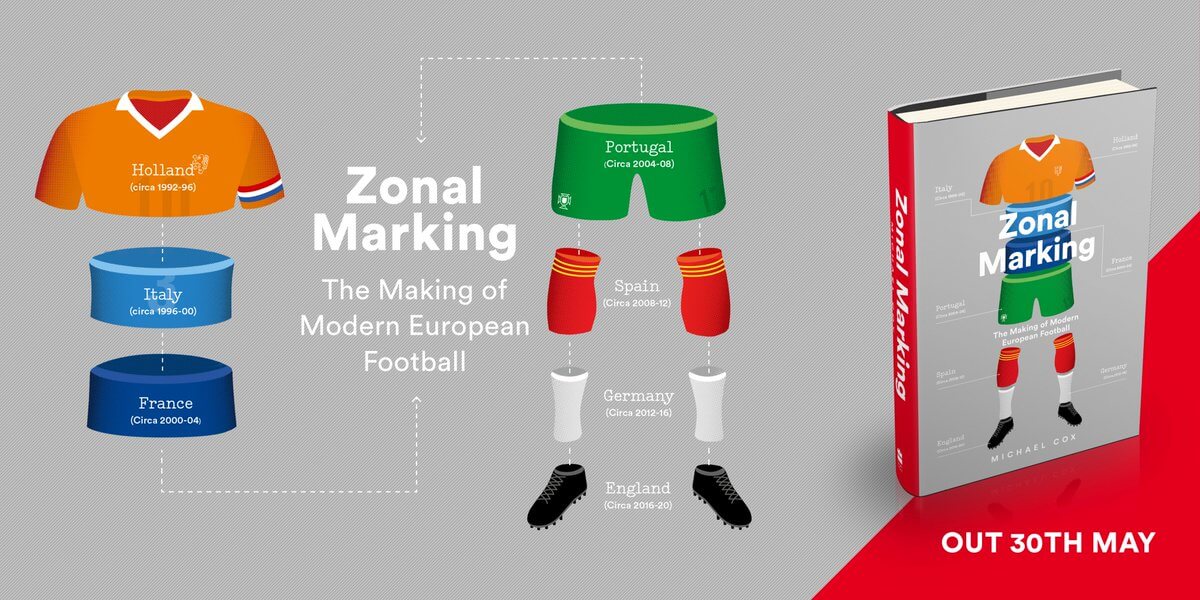 In one of the most engaging reads that you’ll pick up from any good book shop. Today, we talk about Michael Cox’ ‘Zonal Marking’.

Whilst enjoying the mostly polished sport that we know today, it is important to understand how far football has come over time. The game is much quicker, the players are fitter and thanks to the increasingly global nature of the game, we see many different types of players from around the world, playing in a variety of tactical roles … but it has not always been this way!

In the early 1990s English Football was an often a rudimentary affair with two remarkably similar systems where it was more likely than a rainy day in Autumn, to see 4-4-2 coming up against each other in an attempt to out-bore one-another. Now, it is possible to at least 5 or 6 different systems across a Premier League Game week, with even more variety coming in the lower leagues.

This growth is chronicled by Michael Cox in Zonal Marking, a title inspired by a tactical change that has emerged and become more popular in this country, much to the malignment of some dinosaur pundits! Unlike his previous book The Mixer– a thematic look at different players, managers, and events throughout the Premier League era – this edition takes a different approach, breaking down the period from 1992 to today into seven ‘four-year cycles’ in which Cox argues one country has had a dominant period over their competitors for tactical reasons.

For example, the first period, 1992-1996, looks at football in the Netherlands and the success that Louis Van Gaal and Johan Cruyff had with Ajax and Barcelona, respectively. Both men had immense impacts on modern European football, and analysis of their tactics is interspersed with anecdotes of different players, teams, and coaches.

Particular focus is paid to the 1995 Champions League Final, in which Van Gaal’s Ajax, a side littered with star names such as Edgar Davids, Jari Litmanen, Clarence Seedorf and Edwin Van der Sar to name just a few, triumphed over Fabio Capello’s AC Milan. This is one of the key strengths of the text, as Cox seeks to highlight particular games in the period in depth. This level of detail is highly impressive, and helps to add weight to the sometimes more generalised sections.

The other chapters follow a similar formula. For example, the one on Spain which looks into the national team’s successive European championship wins, with the small matter of a World Cup victory coming in between the two, as well as Guardiola’s dominant Barcelona side and the spread of tiki take through Western Europe. Whilst it is hard to pick a chapter that is the most engaging, my own love of Serie A draws me to the Italy chapter, but in truth there are no weaker chapters, with all offering an informative insight into each country’s tactical evolution.

The final chapter summarises perfectly that the “English Style” has changed and can no longer truly be defined, due to the influence of the previously outlined tactical trends. Football in this country has transitioned from an archaic to attractive, and through Zonal Marking we can see how this change has occurred. Cox balances simplicity with detail, in what is an engaging and thoroughly enjoyable read.

Click HERE to check out Zonal Marking by Michael Cox on Amazon – which is available for Prime delivery to UK customers.