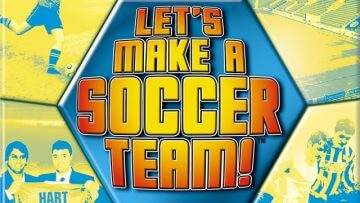 Sometimes, you look back and realise that older games were just better – and those like ‘Let’s Make a Soccer Team’ proves the point!

In 2006 if you wanted to play a Football-themed video game, you had many different options. FIFA and Pro Evolution Soccer were battling out for the title of best playable game, with FIFA 07 pitting its sleek graphics and fully licensed leagues against PES 6 and its precise player and team customization, not to mention the ionic Masters League format. However, one game would soon offer another, completely different option.

‘Let’s Make a Soccer Team’ represented a first for Football games in this country; an immersive role-playing game. Giving the player free reign to create and customise their very own football team in one of six European Leagues, you played as a somewhat dictatorial owner, who can customize the style of play, formation and even the stadium. By the standards of the time it was revolutionary. However, the innovation did not stop there …

Let’s Make a Soccer Team also involved a storyline in the career mode, in which your team would be thrust into the 3rd division play offs, with you needing the monetary benefits of promotion to stay up. Furthermore, a portly business mogul named Mr Leonard (who strikes a very striking resemblance with a certain club owner from the north east) is threatening to buy the club from you, and if you are successful in the play off, he will subsequently buy the neighbouring club to compete against you, making for an interesting dynamic of giving your newly created club a rivalry.

The game gives you a range of counties and cities to choose from, with many of the major places in the area being included. From my memory I think I chose to create a team in Amsterdam, perhaps the only 10-year-old at that time focused on bringing down Ajax’s dominance! However, it is possible to see the likes of Lichfield, Market Harborough, and Slough on the game’s choices too.

The game is simple but effective in terms of its gameplay, with players choosing from 4 club philosophies (not ‘gegen-pressing‘ or ‘park the bus‘ though). However, the slightly primitive tactical choices are perhaps indicative of the time, and also the audience with the game being tailored towards a Japanese market that had not really taken to Football games before – even the Japanese made PES series.

In-game, you have the choice between a 2D and 3D layout, with the 3D graphics about what you would expect for a nearly 14-year-old game. Combined with the jovial tones of BBC Radio 5 Live commentator Alan Green, the match experience is an enjoyable experience, similar to the polished products offered today by FIFA , Football Manager and PES.

Where the game lacks slightly is in its speed. By this I do not mean the game experience, but rather the storyline, which is communicated to you via slow rolling Star Wars-esque text and non-skippable newspaper articles. This combined with the load up pages between animations and the unnecessary cut scenes can make the game feel a bit chore like. Moreover, Green’s repetitive commentary would suggest it was a light afternoons worth of work, with many lines being recycled.

Overall, Let’s Make a Soccer Team offered an idea that was far ahead of its time and delivered it seemingly well. Whilst many reviewers gave it good coverage, it was relatively unknown and even today is seen as a niche game. However, for me it retains its status as possibly one of the weirdest but most enjoyable football / ‘soccer’ games I have ever played.

What about you? Did you ever play ‘Let’s Make a Soccer Team‘? Comment your own review down below!