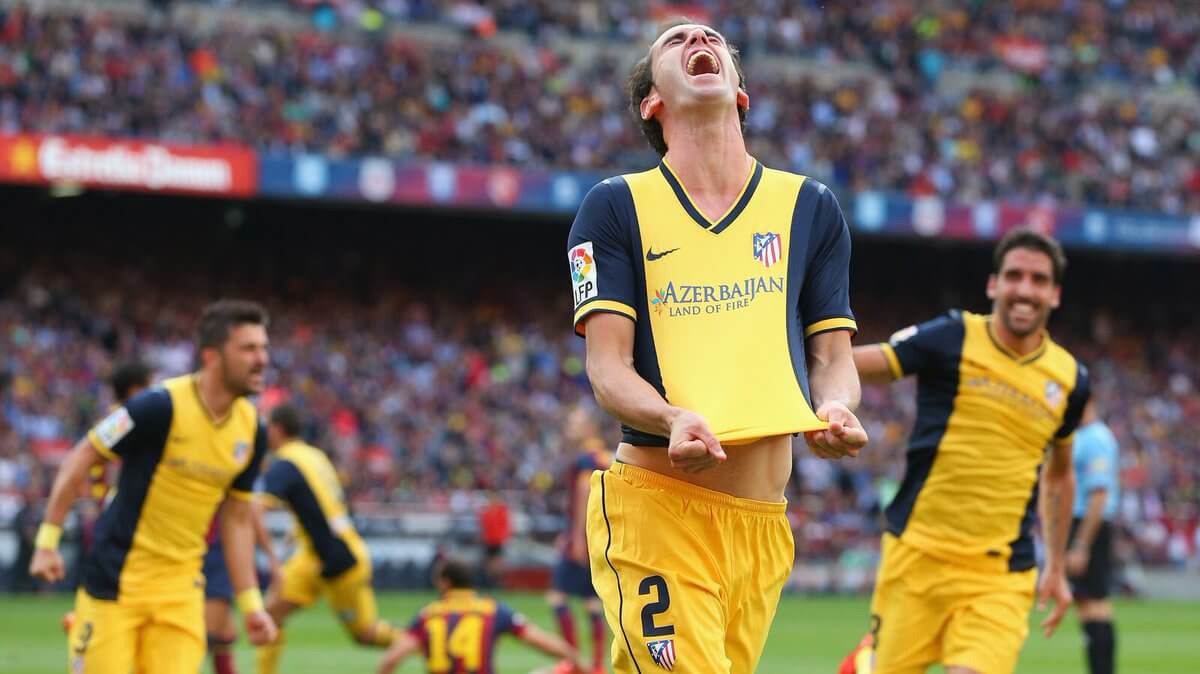 Atlético Madrid have had a real resurgence in the past decade, and here we have one of their most famous moments to date.

As this article is written, Atlético Madrid are five points clear at the top of La Liga with two games in hand. The Spanish club are in pole position to win the league, as long as there are no huge slip-ups … Luis Suárez wouldn’t want to be involved in another situation like that again, would he?

The last time Atlético had won the league title was back in the 2013/14 season. They drew 1-1 to Barcelona at the Camp Nou, on the final day, to clinch the trophy. It was a remarkable campaign for them considering La Liga has been dominated by Barcelona and Real Madrid for so many years. It’s also important to note that neither Barcelona nor Real Madrid performed badly in that season. Atlético won the title by just one game more than their competitors and finished on an impressive 90 points.

As well as being successful domestically that season, they didn’t do too badly in the Champions League. The final was a Madrid derby and Atlético were minutes away from being the European champions until Sergio Ramos’ injury time equaliser took the game to extra time. So, so close! Atlético looked depleted from the desperate defending they were forced into towards the end of the 90 minutes. Real Madrid went onto win the game 4-1 after Gareth Bale, Marcelo and Cristiano Ronaldo scored in extra time. Football can be a savage game at times!

Despite the Champions League final defeat, the 2013/14 campaign was a great achievement for Atlético Madrid. Supporters can look back at the players they had and how manager, Diego Simeone, created a team full of quality and fight that would see them become league champions. Initially losing Radamel Falcao, their star striker, before the season had started, they had Diego Costa waiting in the wings. Atlético also signed David Villa from Barcelona but it was Costa who had taken his opportunity by becoming the club’s top goalscorer of the season.

A Diego Simeone team is known for being extremely tough to score against because of how defensively well-organised they are. Their defence were just as crucial to Atlético winning La Liga and finishing runners up in the Champions League. Simeone opted for a flat four-four-two throughout the 2013/14 season, with players who were willing to run themselves into the ground for their team. The following players I have mentioned were chosen because majority of them had the most appearances. They were also the 11 who started in the final match against Barcelona that won them the title.

First up is goalkeeper, Thibaut Courtois. The Belgian shot stopper, who was on loan from Chelsea, was key to Atlético conceding the least number of goals in that campaign. No surprise Chelsea started Courtois as their main goalkeeper the following season. Next, the back four that consisted of; Filipe Luís, Diego Godín, Miranda and Juanfran. Godín and Miranda was Simeone’s main centre-back pairing and Toby Alderweireld, who had signed for Atlético from Ajax that season, was their backup defender.

Then there was the midfield of; Koke, Gabi, Tiago and Arda Turan. Each one of them full of quality but were just as capable to dig in and fight for a result. Koke is now the only remaining member from this midfield four to play for Atlético. Koke is also now their club captain. Raúl García was just as influential and appeared in most matches of the campaign but featured from the bench against Barcelona. So, for the purpose of this article, he is our honourable mention! Brazilian playmaker, Diego, comes in close second. His technical abilities stood out from his teammates and he was a great player to sign on Football Manager or FIFA, btw!

Last, but by no means least, the forward pairing of; David Villa and Diego Costa. As mentioned, Costa was the player to rely on to hit the back of the net, but Villa chipped in with goals and assists. Costa returned to Atlético Madrid, after a spell at Chelsea, but found it difficult to reignite the same high-level performances in his second stint.

There you have it. The amazing Madrid team of the 2013/14 season. Let us know how you think this team compares to the Atlético Madrid of present. We think that they are both pretty good.

previous‘Let’s Make a Soccer Team’ (2006) – A Football Game like No Other!
nextHow Linkedin Can Help You Land a Job in Football!