Hernan Crespo: The Unsung Icon of the 2000’s 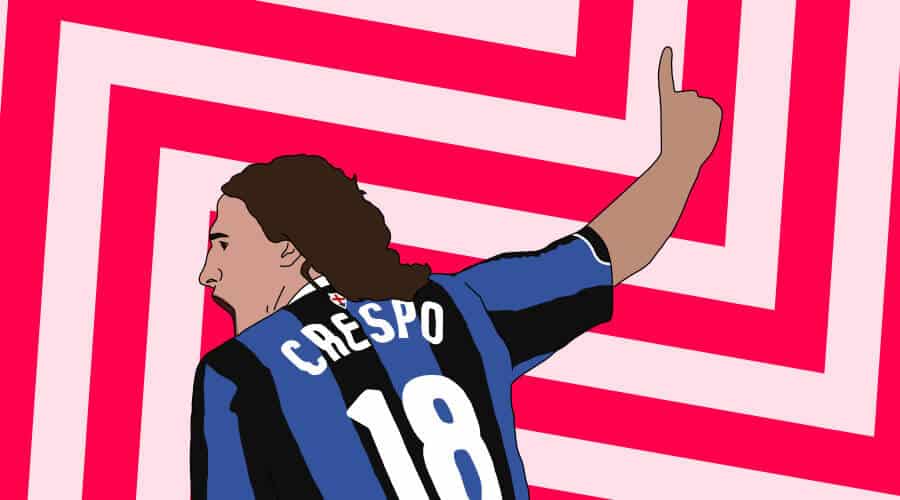 Long hair and a brute of a left foot, oh and he played for Chelsea you remember that? Fair to say that Hernan Crespo was a hell of a player.

The familiarity of Hernan Crespo’s reputation was predominantly forged through the impact he had on the footballing world throughout the noughties. He was a strong, elegant footballer, and in 2000 was the most expensive player on the planet. Although he only held this title for 11 days after Luis Figo’s mega transfer from Barcelona to Real Madrid. This perhaps demonstrates Crespo’s career perfectly, as a player whose achievements were constantly overlooked by his counterparts. But I guess not having a pig’s head thrown at you by the touchline is a welcome relief (Google if it you think I’m joking)!

Focusing on Hernan Crespo (like he deserves), his £35 million transfer saw him join up with high-profile names such as Pavel Nedved, Diego Simeone, Alessandro Nesta, Marcelo Salas and Juan Sebastian Veron; within perhaps the greatest ever side that SS Lazio has been able to produce. These players and their teammates had just come off the back of winning the league with expectations of the arrival of Crespo sending the Italian capital into unparralled excitement – at the thought of back-to-back league titles.

They were unable to do this but still managed to win the Supercoppa Italiana with Crespo netting 28 across all competitions. The Argentine managed 48 goals in 73 games in all competitions for the Italian outfit; an extremely commendable return for a player brandished with such a lavish price tag. So nice to see someone not get weighed down by that figure!

With 26 of those 28 goals coming in the league, he finished his debut season with Lazio as Serie A’s top scorer, again a very tall order in an era and league renowned for their astute and composed defending. Throughout all of this through, Hernan Crespo’s career can perhaps be summarised into a few defining moments, one of them being his performance in the Champions League final against Liverpool in 2005.

We all know how this game ended, but people tend to forget the first half influence of a player arguably at the back end of his career. His second goal was breath-taking, a deft dink over the keeper from the paint line on the edge of the area. This goal summarises the player he was, unselfish in his commitment to the team and a readiness to capitalise and punish a defence with a skill that seemed to come very naturally to him.

Crespo’s career failed to live up to the one that many predicted. Price tags can often be the downfall of a player, with players such as Joao Felix and Phillipe Coutinho going for monumental fees and having to perform above and beyond their current capabilities. This is just one of many factors that go into a player not quite playing up to the level expected of them.

In saying this, Crespo won back to back titles when he eventually moved back to Inter Milan in 2008 after successful loan spells at both Milan clubs. He has played under some of the best managers in the world and also boasts a more than exemplary record for Argentina having scored 35 goals in 64 games for the national team. And there really aren’t very many top-level strikers who can translate their club form to their country like he did!

What’s interesting when taking a bird’s-eye-view of Hernan Crespo’s career is that he had all the attributes and qualities to excel and write himself into the history books, but never quite managed to propel himself into the limelight. But maybe that’s more to do with us as journalists and talent-respecters than it is with Hernan himself. After all, a 20-year professional footballing career across the upper echelon of the game – with over 300 goals along the way – deserves a much greater reception.

What is your honest review of Hernan Crespo and when did you first hear about him? Get it all in the comments below!