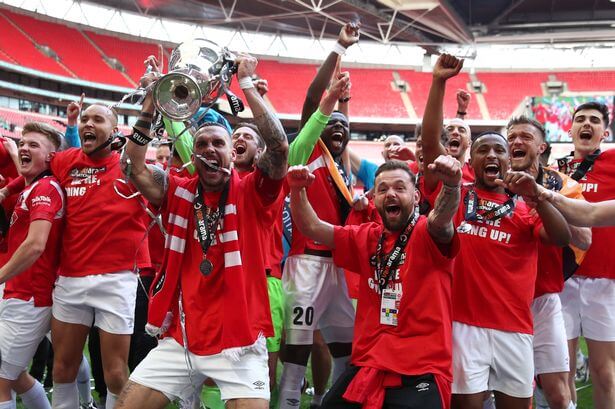 In case you didn’t already know this, not many clubs at the lower ends of the footballing pyramid are considered ‘professional sides’.

As the lads down at Salford City Football Club know very well, there is a whole different world of football that exists beyond the paramore of sub-National League football. Down there, let’s just say it’s a lot more ‘get the ball in the mixer’ than it is ‘let’s play the patient game and work towards an opportunity’.

I’ve mentioned it in a previous article here at Ultra UTD where I went through what it was like to watch a game as my nearby non-league outfit, Wembley FC. And it’s a similar viewpoint for many fans who journey to their local sides on any given Saturday, but then you get those who continue to win their contests until the EFL comes into view …

When you get there, there’s usually a number of different things to consider – most of which are largely positive. Firstly, you gotta look at the infrastructure of your club and ascertain whether or not they’re ready to go. And the same goes for the general checks and balances that any good business needs to strike to achieve growth.

With Salford City Football Club, they’d obviously gone through a miraculous transformation shepherded by the Class of 92 in the past half-decade. The financial muscle of major stakeholder Peter Lim has also helped them to alleviate the issues that could arise from those mentioned above. But then, one thing that’s very difficult to account for is the human element of having to decide who is and isn’t good enough to ‘turn professional’.

Like I say, not many clubs at the lower end of football are ‘professional’ – meaning that they aren’t paid. They’re usually doing it all ‘for the fun of it’ and/or in the vague hope that their success will (one day) end up putting the club in a position where professionalism is a given. Salford City Football Club were in that very same circumstance in 2017 and experienced exactly why it’s a very awkward balance to strike when going through this development.

The dressing room became sectioned off into various clans depending on their contract status. The future of the club was to be put upon the shoulders of those who’d been offered a professional deal, whereas their immediate success hinged upon those who might not have that luxury. In their (bloody good) Sky Sports documentary, the owners admit that perhaps electing not to leave things until the end of the season could have been a big issue for them on the pitch. But thanks to management, results elsewhere and a whole lot of luck – it’s all semantics at this point for Salford City Football Club. Though it’s worth bearing in mind for clubs in and around them!

Do you have your own Salford City Football Club memories? If so, get them in the comments!