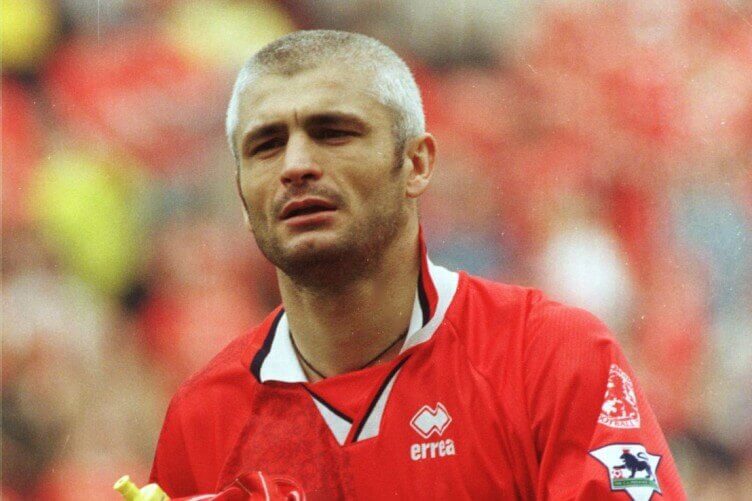 I must say, I do hold a soft spot for players who are willing to remain humble in the eyes of stardom and go for something that wouldn’t suit the pristine image of those at the top of the footballing game.

What I mean to say is, I really appreciate players like Fabrizio Ravanelli. Let me put it to you this way: imagine that you are one of the best in your world at what you do – and you’ve been recognised as such by your peers. There is this tendency to stay within such ego-padding surroundings for want of retaining your status as ‘one of the best’.

Then, imagine you were given the opportunity to test yourself once again in a tougher environment, at a harder level and with even more scrutiny – all to be a part of a ‘project’ that could go either really right or really wrong. Most would probably stay where they’re revered and ignore the drop. But I admire those who think differently.

Dove-tailing beautifully with this really nicely written piece on Brazilian star Juninho, Fabrizio Ravanelli is one of the most decorated, talented and iconic players to have ever put on the red of Middlesbrough Football Club. And that’s really saying something when you consider who they’ve had on their books ’til date!

Nicknamed the ‘White Feather’ for his idiosyncratic hairstyle, that patch must’ve looked like a streak in the eyes of the defenders who lay before him – those of whom wouldn’t have had much time to take in the sight of the Italian before his dynamite left boot is rifling in a strike beyond their goalkeeper’s lines.

Blessed with an uncanny instinct of knowing where the goal was, and never being too afraid to do whatever it took to get him there, Fabrizio Ravanelli symbolised a truly golden era for football in the North East. With their expansive attacking qualities and the moments they bring, it feels as though he was there for more than just a single year.

As it happened, ‘Fab’ was a man whose talents courted attention from some of Europe’s most elite institutions, and it’s no wonder that the likes of Marseille, Lazio and Juventus pepper his awe-inspiring CV. Though an inclusion that might surprise those unaware to hear about, is that of Derby County in the Premier League.

Teaming his two English spells together, Fabrizio Ravanelli amassed over thirty goals in just shy of ninety showings. But it was his guile and presence more than anything which won over the hearts of the British people. Inherently stylish, inescapably charming and typically fiery when it came to getting the job done, not even relegation could quell the fire than burns in the hearts of fans up and down the country when they hear his name.

What’s your favourite Fabrizio Ravanelli moment? Get it down in the comments below!