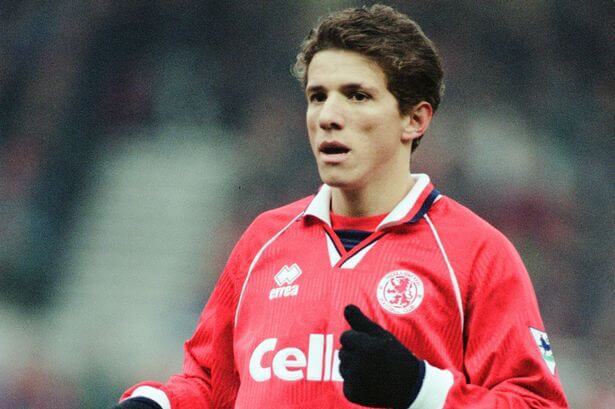 The eagle-eyes amongst you will realise that Juninho Paulista didn’t spend the entire mentioned period in Middlesbrough, but putting both brackets would have looked awkward so, we move …

By Middleborough’s promotion into the Premier League in 1995 – purchasing talent from overseas (especially outside of Europe) was fairly unheard of. However, after leading Boro through an impressive promotion campaign, and a fancy new stadium to show off, manager Brian Robson was given a generous budget to try to ensure his team would be ready for top flight football. So, instead of only scouring the British landscape for the best domestic talent, Robson thought outside the box and pulled off one of the most surprising transfers of the 20th century.

Meanwhile in Sao Paulo, the 5 ft 6 Brazilian playmaker Juninho Paulista had spent the last year capturing the attention and interest of many top sides in Europe. Winning a number of trophies including the Intercontinental Cup against AC Milan in 1993 and becoming one of the most sought after players in the world as a result.

Naturally, Brazil’s Footballer of the Year caught the wandering attention of Bryan Robson (who was also an England coach) while starring in a 3-1 win over the Three Lions at Wembley, scoring a beautiful free kick in an overall dazzling display which convinced ‘Robbo’ enough to bring the exciting midfielder to Teesside. Ultimately, he saw a player who would get fans out of their seats and encourage season ticket purchases. Worth the effort, I suppose!

After taking a trip to Sao Paulo, and the “long drawn out negotiations” which ensued, Robson persuaded the Brazilian wizard to sign for them over the plethora of clubs chasing his services (how, I don’t know!), and bought him for £4.7 million. Middlesbrough have never been the most glamorous team in England and for the first time their fans witnessed their team at the centre of worldwide attention after pulling off such an audacious signing. Even for those who despise the Boro, you just love to see something like this in our game.

For a club that were close to liquidation a decade before, a player of such calibre coming to Middlesbrough had kind of elevated him to legendary status before he had even kicked a ball – with fans affectionately naming him “The Little Fella” and greeting him at their airport with Brazil flags. That’s not to mention the unveiling at the stadium in front of thousands of fans all suddenly really into samba. Imagine the excitement once they saw him play!

Juninho Paulista impressed on his debut; producing a memorizing display of skill and a willingness to get stuck in (which the fans loved him for) against Leeds. He didn’t register many goals and assists in his first season, but he still left audiences in awe with amazing mazy dribbles, exquisite first touches and defence splitting through balls. Every time Juninho received the ball at the Riverside there would be a roar of excitement with fans standing up from their seats to witness an artist in motion.

The next season, Boro strengthened further bringing in Champions League winner Fabrizio Ravinelli from Juventus for the playmaker to link up with and Brazilian midfielder Emerson, which really helped him hit the ground running. With the ability to make players around him better, Juninho and Boro’s two glamorous new signings played some absolutely outrageous football in a rollercoaster season that saw them reach two cup finals, score 51 goals but ultimately relegated from the Premier League after receiving a controversial 3 point fine by the FA for claiming they were unable to field a team for an way fixture at Blackburn due to injury and illness.

Amidst all this, Juninho’s class shone through and he ended the season looking like the most gifted player in the country with 13 goals and a show reel of mind boggling dribbles for garnish. The appreciation from his fellow peers in England was outlined by the Brazilian being named the Premier League Player of the Year, the only player to win the award when his team had been relegated.

Visibly heartbroken after Middlesbrough’s relegation, and too good of a player to play in the 2nd tier of English football, his departure to Atletico Madrid did little to hinder his hero status in the North East. Juninho endured an injury ridden few years after leaving England, missing the 1998 World Cup. But to the delight of Boro fans, Atletico loaned him back for the 1999/2000 and was bought back permanently after winning the world cup in 2002.

“Genius” “Legend” and “God” are the answers you get if you ask a Middlesbrough fan to describe the diminutive Brazilian. One of the first foreign playmakers to grace English soil, The Little Fella entranced audiences at the Riverside with his unbelievable close control, impeccable set pieces, vision to split defences and the timely ability to make late runs into the box and score big goals.

He treated the stadium like his playground. Never before have Middlesbrough fans witnessed such talent grace its pitch and probably never will and he is without question their greatest player of all time. Juninho Paulista and Middlesbrough is a love story that will forever go down as one of the most unlikely but beautiful affiliations in football history.

If you’re a Boro fan (or even if you aren’t) and you remember watching Juninho Paulista in the Premier League – get your memories of him in the comments below!