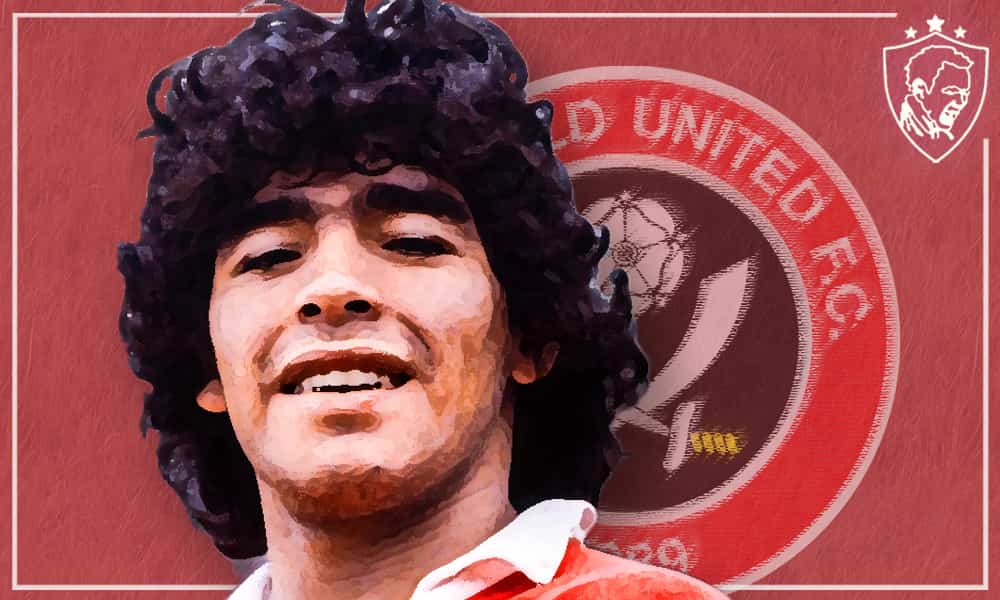 A man who has made more than his fair share of headlines in the past, it surprises me that something like this could possibly come as a surprise to you.

Even the most die-hard of Blades ultras wouldn’t dare to equate the name ‘Diego Maradona’ with ‘Sheffield United’, unless the words ‘would never, ever come to’ were in between them. However, turn back time a little bit (a lot a bit) and it was a far more serious series of negotiations than history would ever give credit for.

As things stand, El Diego’s legacy ranks him among the very best that football has had to offer. So it’s no wonder that his CV contains the likes of Boca Juniors, FC Barcelona and … er … Napoli; places where he’s strutted his stuff better than anybody before him and many others after him. For more on the great man’s career, check out our official Ultra United tribute to him by clicking this link here! And hop into the comments to share your opinion.

Having said that, prior to his status as a globe-conquerer, his modest upbringing translated into an equally modest development into being a professional footballer. It was with Argentinos Juniors, where the mercurial Argentine spent half a decade learning his craft and attracting the attention of the game’s elite. Over 150 appearances later (with almost as many goals), his natural guile, football intelligence and creativity was clear for all to see …

“When Diego came to Argentinos Juniors for trials, I was really struck by his talent and couldn’t believe he was only eight years old. In fact, we asked him for his ID card so we could check it, but he told us he didn’t have it on him. We were sure he was having us on because, although he had the physique of a child, he played like an adult. When we discovered he’d been telling us the truth, we decided to devote ourselves purely to him.”

But before Boca Juniors eventually claimed Diego Maradona’s signature come the end of his time with Juniors in 1981, a Harry Hallam-led Sheffield United institution were keeping their eyes and ears close to the scene three years earlier. It even got to the point where the Blades made an official offer to the club and sat down to negotiate.

From Maradona’s perspective, it was a decent chance to move to a Second Division club with the goal of bringing them higher up, and though foreign players weren’t as common in the UK game as they are now, it was an exciting prospect for all. But to get to speak with the player and his family, clubs ought to settle the small case of making sure they’re transferring over the right amount of funds to secure the transfer. And herein laid the problem.

Argentinos were pretty staunch in their £200,000 valuation of Diego Maradona which, though a relative pittance today, would have been a club transfer record for both buyer and seller. And so it came to be, that after a good few hours and days of negotiations – and a more official £160,000 bid from United – that the two were never going to be able to reach a conclusion which would relocate Maradona to England.

However, expectations set firmly in bringing a South American superstar to excite the home supporters of Brammal Lane, Haslam instead set his sights on River Plater youngster Alejandro Sabella. Who, though he could never quite capture the magic of El Diego (even in the Primera Division) remains a cult hero for all at the club.

But still … what if the transfer actually went through?! That’s a Back to the Future timeline, if I ever saw one!

What do you imagine would have happened if the great Diego Maradona actually moved to Sheffield United in the 70s? Let us know your theories in the comments below!