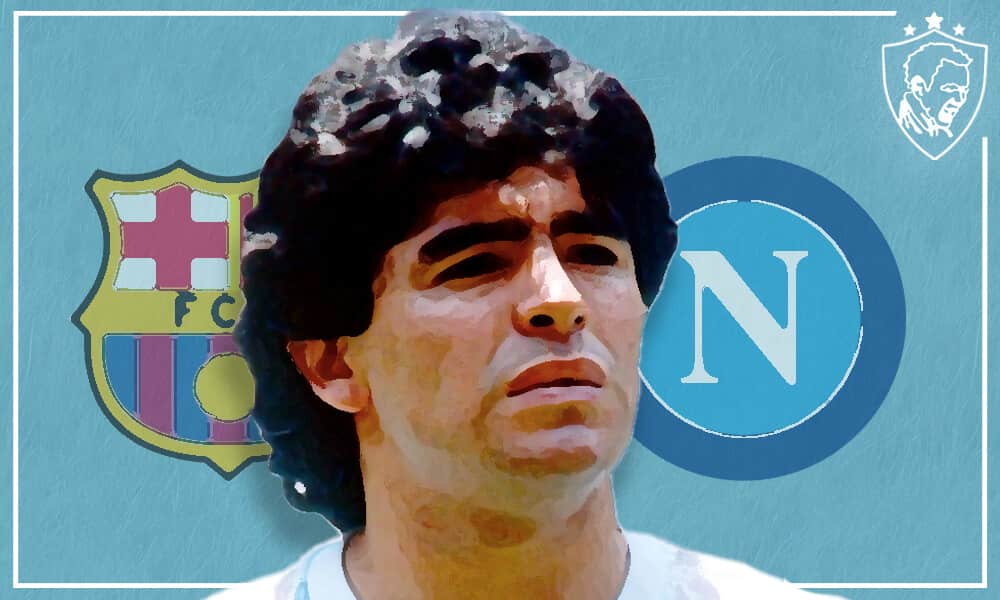 Born in an underprivileged community on the outskirts of Buenos Aires, there was very little to get excited about in the young life of Diego Maradona.

He was the first son of 4 daughters before becoming the elder to two younger brothers not too long after he was born. And it was only when a football was placed at his feet by the age of three, that he discovered a passage-way through which to earn a brighter future for his family.

Typical to the fate bestowed upon the talented footballers bred from the far-away lands of South America, a 15 year-old Diego was spotted by a scout for a desperate Primera Division team called ‘Argentinos Juniors’. A team so needy in fact, that they enabled a 15 year-old Maradona to lead the line for them in the dawn of the 1976/77 domestic season. Needless to say, the youngster didn’t disappoint – repaying them with 115 goals across 167 games in a five-year stretch with El Bicho, before local giants Boca Juniors came armed with a $4million pay-cheque to take the boy to the big city.

A personal disagreement between their star signing and manager rendered his stay in the capital far shorter than expected – but not before a chart-topping scoring tally allowed the Bombonera faithful to enjoy another season in the spotlight. A year after breaking the bank for their star, they doubled up on their investment once FC Barcelona came calling with a $7.6 million offer for the Argentine striker – culminating in two tumultuous years in the Catalan state where we saw a different side to Maradona’s game.

Arriving as an ‘outsider’ to La Liga at the time, Maradona’s price tag and enviable talent on the pitch arose a level of envy and jealousy from his peers that was difficult to shake. Not least for Athletic Bilbao defender Andoni Goikotxea – a man currently referred to as ‘The Butcher of Bilbao’ for inflicting a career-threatening injury on Maradona’s ankle when the teams met in September 1983. To make matters worse, he proceeded to proudly bronze the boot which brought down Maradona – to form an artwork that now rests proudly under lock and key in the Spaniard’s family home.

So, needless to say, tempers were flared once a recovered Maradona reunited with his opponent almost a year later in the 1984 Copa Del Rey final. The Bilbao lot were determined to remind Maradona of why he should never have come to their back yard, but like a bull charged off the energy bubbling over the surface that day, a red-faced Diego retaliated in the only way he knew how

Failing to foreshadow the widespread reaction of the fans in attendance and those watching at home, over sixty people claimed injury that day – with Barcelona’s president (Josep Lluis Nunez) flinging the blame at his striker’s feet. Claiming: “When I saw those scenes of Maradona fighting and the chaos that followed I realized we couldn’t go any further with him.” So now, there was a big decision to make for player and club – how do they sell on a supposed ‘problem-child’ to another club, while also commanding the money required to buy someone who averages a goal involvement every time they step out onto the pitch? Their answer came from the most unlikeliest of sources.

Arriving at a time where the likes of A.C. Milan and Juventus dominated the domestic scene, and where the city of Naples was derided for its supposed lack of ‘class’ in comparison with the rest of the country, Maradona had it all to do. In July 1984, he was unveiled at the Stadio San Paolo in front of 75,000 adoring Napoli fans – all of whom were clamouring over each other to catch a glimpse of the man that would lead them to prosperity, and to finally claim the respect that the city deserved from their rivals. And it was here, in a town more famous for its mafia-led community than anything their team ever did on the pitch, where Maradona would reach his prime levels of performance – all just in time for the 1986 World Cup.

Having adopted the captain’s responsibility for his new club, Diego took to a similar role for his national side with aplomb – seamlessly leading the team through to a mouth-watering encounter with Sir Bobby Robson’s England in the quarter finals. Here, Maradona was ready to do anything and everything it took to claim the ultimate prize for his country – even if it meant circumventing the laws of the game to make that a reality.

In an eventual 2-1 win, both of Maradona’s goals are remembered for very different reasons – where the controversy of the first and the notoriety of the second combine to illustrate the legend of the man himself. The now-infamous ‘Hand of God’ goal which deceived Peter Shilton late in the first half has given many a reason to derail the Argentine’s overall brilliance for the shamelessness with which he claimed that moment.

And while I can appreciate the sentiment behind those who have been scolded by his actions, there isn’t really much evidence to suggest that the balance of the game would have been tipped in England’s favour without it – particularly when Maradona’s second strike displays the level of quality at Argentina’s disposal. And even more so, when their cumulative efforts resulted in a deserved World Cup win by the tournament’s end – a moment that Diego himself describes as the greatest of his life. All in all, is that it showed the player’s true dedication to winning for his supporters by any means necessary – a mindset that would be both beneficial and conflictive as the years rolled by.

Back on terra firma with Napoli, their World-Cup winning captain spearheaded their most lucrative time on the Italian turf – winning their second ever league title, a Coppa Italia, an Italian SuperCoppa and a UEFA Cup trophy between 1987 and 1990. Where his dizzying exploits on the pitch and infectious personality endeared himself to his ‘new home’.

But as the media circus intensified around Naples’ new saviour, their talisman’s personal problems came to light. This included controversy around fathering an illegitimate son, buddying up with the area’s Camorra criminal organisation and an eye-watering list of substance abuse claims to cope with his tumultuous time off the pitch.

His fabled era with the national team soon followed this downward trajectory – resulting in being caught for doping with a banned substance before being expelled in 1994. Upon retirement 3 years later, hopeful false-starts in management with the Argentina national team and troubled Mexican side El Dorados de Sinaloa followed, yet the memory and legacy of Maradona lives on. Where former teammates like Bernd Schuster, Gary Lineker and Gabriel Batistuta reminisce over the talents of Diego as being central to their club and country’s successes, and current stars including Lionel Messi and Sergio Aguero dedicate their personal CV’s to the example and unrelenting support set and provided by him.

Overall, he was a man whose personal choices may divide the opinions of those who are quick to judge without meeting the man himself, but whose dedication to the game we love today is reason enough to mourn the passing of one of the best to ever commit themselves to the sport.

All I hope now, is that he finally finds eternal peace back in the arms of his mother and father, and that those who remain on this Earth unite to respect and thank Diego for everything he gave to us.

nextA Lesson in Loyalty and Karma with Alan Smith!