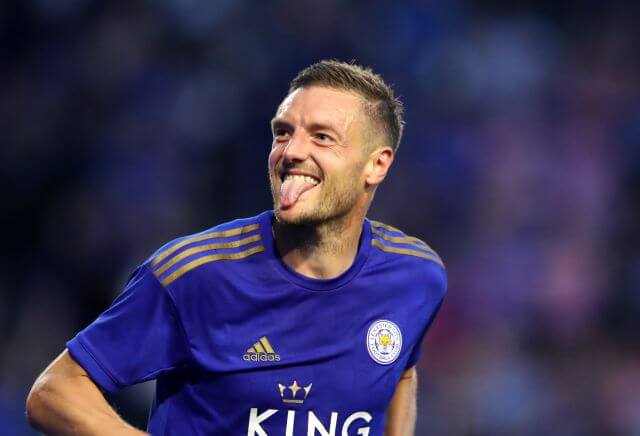 Yes, we know that this is a Beyonce banger, but Jamie Vardy really could be irreplaceable for the Foxes in the years to come.

Jamie Vardy’s unique career path into becoming a Leicester City F.C. and Premier League legend has been talked about for many years, but now at 33 years-of-age we are all wondering when he’s going to hang up his boots. After rising through the ranks of the English football pyramid, scoring crucial goals for Leicester City to keep them in the Premier League and then winning the title the following year in that remarkable campaign, surely it is impossible for The Foxes to replace their number 9 when he does decide to retire? Let’s take a deeper look at this …

After their 5,000-1 title winning season, where not just the nation, but the world seemed to be cheering them on from afar, Leicester City tried to recruit strikers that could add competition and rotation for Jamie Vardy – not that he appears to need a rest! Islam Slimani was brought in from Sporting Lisbon and has since been on several loan moves before returning to the King Power Stadium to play a bit-part role in their 1-0 defeat to Aston Villa back in October 2020. Of course Leicester City’s other well-known striker is Kelechi Iheanacho, who is evidently not the same style of player, nor has demonstrated the same goalscoring numbers as Jamie Vardy.

“I’ve definitely adapted… definitely. I used to get the face-on if I weren’t being involved as much, but the gaffers said to stay away.” – Vardy mentioned during a chat with Jamie Redknapp how he’s had to modify his game under Brendan Rodgers by avoiding dropping too deep to get the ball. He’s already on 11 goals so far in this Premier League season and looks in usual form to challenge for the Golden Boot – again. But it’s his personality on, and I’m sure off it too, that makes him invaluable.

There are clinical finishers in the world, sure, but Vardy’s dogged and relentless nature are parts to his game that are very difficult to teach to a player. We have to also remember, Jamie Vardy was a £1m signing too! So what can Leicester City do? Well, the majority of their past recruitment has been fantastic – N’Golo Kante, Youri Tielemans and of course, Jamie Vardy to name a few – so it’s unlikely that the Club are going to panic, even with the inevitable loss of one of their all-time top goalscorers. Whether they look domestically or overseas, they need a player capable of regularly putting the ball in the back of the net at the highest level.

Publically, Leicester City haven’t been linked with many strikers to replace him, especially those that would fit as his understudy, but one exciting talent whose contract is due in the summer could be a good prospect. Folarin Balogun is reported to likely leave Arsenal at the end of the season and although he does not share the same non-league background as Vardy, he has displayed a similar unselfish work ethic, electric pace and clinical finishing ability within the handful of appearances he’s made for The Gunners. Only regular game time could determine whether the 19-year-old is able to deliver the performances that are required in the topflight.

Another developing talent put his name in lights last night after scoring an equaliser against Liverpool in very familiar fashion to Leicester City supporters. Aston Villa youngster, Louie Barry, took his chance with such incredible composure and instinct that Jurgen Klopp couldn’t help but comment on him after the game.

“The boys did really well. Little Jamie Vardy was a proper threat,”. The Reds boss had given the 17-year-old lots of praise when talking to talkSPORT following their 4-1 win in the FA Cup. It’s unlikely that Leicester City will shortlist Barry, however, as he left Barcelona for Aston Villa in 2020, joining his local Club and the side that his family support. It would take a premium for a fellow Midlands club to lure him away from Villa, especially after his performance yesterday!

Look, I’m not saying there’s a definitive player that can guarantee to fix Leicester City’s problem when they lose Jamie Vardy, but he is getting closer to the ages of retirement for many players and The Foxes will not be able to rely on the veteran forever. So, maybe it’s worth having these awkward conversations before they become a real problem!

What do you think the Foxes should do in lieu of Jamie Vardy’s retirement? Tweet this and let us know!