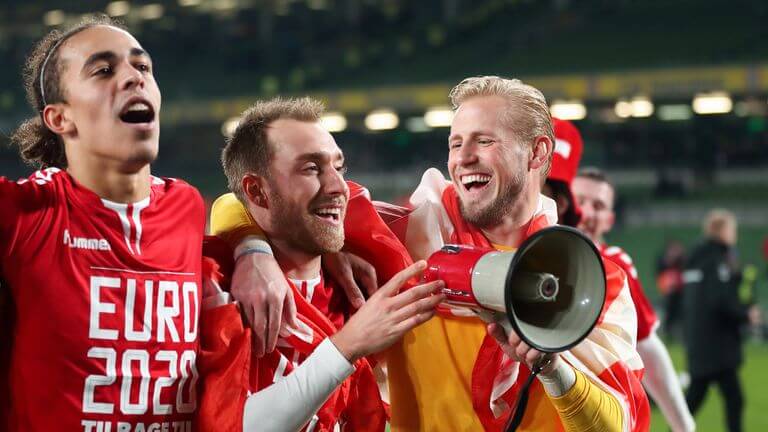 Are we still calling it Euro 2020 … even though it’s happening in 2021? If so, then will every future one be in odd numbered years instead of the traditional even? Anyway, we digress, let’s talk Denmark!

Denmark, not a nation you’d associate with international success, nor do they exactly have a thriving, wide-reaching league, but what they do have, is as many major honours as England! Courtesy of defeating the newly reunified Germany 2-0 in the Euro 1992 final in Sweden, thanks to a first half thunderbolt from John Jensen and a lovely Kim Vilfort finish. A competition they only managed to qualify for since the disqualification of Yugoslavia due to the breakup of the country. (All very confusing political stuff I’m failing to make sense of, so let’s move on …)

So it’s fair to say they were heavy underdogs. Not that they didn’t have some real quality on the pitch, the likes of John Jensen, Brian Laudrup and of course Peter Schmeichel between the sticks. However the nation of Denmark didn’t even have a professional football league until 1986, so if we’re being honest … they weren’t fancied at all.

After scraping second place in what was then, an 8-team group stage, shocking the holders The Netherlands in the semi’s, and then Germany, they pulled off the utterly unthinkable by winning their first international honour. This is way before my time, but I’m imagining the joy for the Danish football fans was comparable to that of Leicester City fans after the astounding 2016 Premier League title win.

Fast forward to present day and the Danes are preparing for the delayed Euro 2021, where they’ll face Belgium, Finland and Russia in Group B. A situation you’d fancy for a team ranked 10th in the world to get through, although they’re going to have to face the Belgians early on in their campaign, who rank 1st.  By contrast, Finland and Russia (who rank 54th and 38th respectively), on paper, should be able to overcome.

Now I won’t pretend I understand how the FIFA world rankings work, and when looking at the points system I can’t make head or tail of it, but the top ten does seem low-key justified through the objective eye. Then after that, the interesting part, anything can happen – especially given the enviable talent that Denmark possess! With the creativity they’ve got in Christian Eriksen, and solidity in Spurs hardman Pierre-Emile Hojbjerg, next to Bundesliga veteran Thomas Delaney, that’s a very strong, experienced, balanced middle of the park.

Although they’ve also got depth and ability elsewhere, Martin Braithwaite of Barcelona, Yussuf Poulson of RB Liepzig and Kasper Dolberg of OG Nice are all more experienced attacking options enjoying pretty decent seasons with their top European clubs. Younger talents however such as Andreas Skov Olsen, of Bologna, Mikkel Damsgaard of Sampdoria and Jonas Wind of Copenhagen are all emerging onto the international scene having chipped in with goals of their own in recent world cup qualifying games.

In terms of their back line there’s again, an abundance of options, young, old, experienced and emerging … all in one tidy Danish package. Chelsea’s Andreas Christensen, Milan’s Simon Kjaer and Atalanta’s Jaokim Maehle have all been involved in European competition over the course of the season. While Fulhams loanee from Lyon, Joachim Anderson has been influential in the solidifying of their backline in recent months, although sadly their relegation is now looking imminent, he’s played well.

Jannick Vestergaard of Southampton, a mountain of a man is also in contention, with talk of big six clubs coming in for him, specifically Spurs, I’m sure he’ll be on the plane. And ever-present in goal though is the son of the Euro 1992 winning goalkeeper, Kasper Schmeichel who plays for the Premier League’s Leicester City.

Like England, the Danes are playing all three of their Euro 2021 group games on home turf, at the Parken Stadium, the home of F.C Copenhagen. With the Danish government also planning to allow 12,000 fans at each of these games, they’ll be hoping that the home advantage and support will be a welcomed boost for the side, helping them on their way to the knockout stages.

When you look at their current form, having only lost twice since their World Cup 2018 exit, and having a 100% World Cup qualifying record, scoring 14 and conceding 0 in three games. They really could be the dark horses this summer, if they keep their form going, there’s no reason why they can’t get out of their group, and even reach as far as the quarter finals? Semi’s? Who knows, one thing’s for sure though, they’re going to be a great watch.

What do you make of Denmark’s hopes in Euro 2021? Let us know in the comments below!